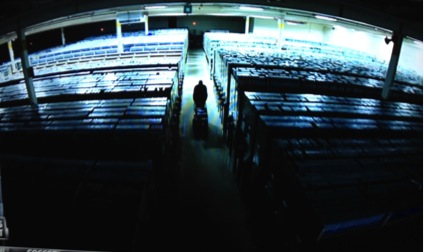 On second thought this isn’t that exciting, but as a guy who likes to see how the sausage is made I found these shots from SportsCenter to be pretty interesting. 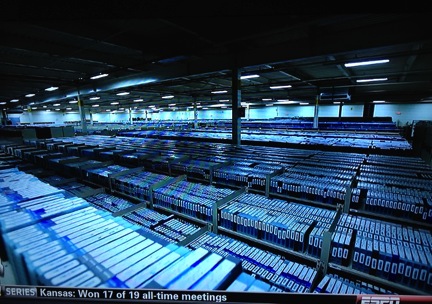 There are certain programs and segments that have so many old clips used for just one piece, they’ve left me curious as to just how those clips are pulled to get exactly what they want into a segment.

Most often this occurs while watching something like NFL Films Presents where they somehow have 25 different clips of Brett Favre talking to a teammate on the sideline during 10 different games of him being mic’d up spanning his entire career and having that stuff intermixed with game footage and past interviews he’s done.

The thought of how the likes of NFL Films and ESPN store, index, sort, and pull all of these clips on a daily basis blows my mind. What I found out watching this segment is that:

– The aisles were filled with some type of cassette storage. Pretty sure that it’s not VHS but a specialized storage device similar to what I’ve seen when interning at an IT datacenter for Time inc.

– The footage within the aisles showed that at least a portion of this vault/warehouse were sorted by player as they showed sections titled “Marino” and “Manning.” From there it looked like clips were indexed by chronological order.

– If we’re to believe the narrator of this segment, this old guy walks the building grabbing tapes and throwing them into what amounts to a shopping cart.

– Skip Bayless has already racked up a huge amount of late fees as he’s checked out all of the Tebow footage they have and hasn’t been heard from since. He’s also taken all the Elway footage and is threatening to destroy it all unless the Broncos sign Tebow to an extension and name him a starter until 2030.

If you had a backpack and 15 minutes and could grab anything you wanted, what would it be? I am guessing with so much of the newer and more famous stuff online, you’d probably look for older obscure stuff perhaps.

I’d go with the episode of “The Life” that featured how Mark Mulder and other A’s lived like a bunch of college students in a big house, an Outside The Lines Episode that highlighted the euphoric atmosphere surrounding the 2006 Ohio State vs. Michigan game, and maybe grab some reels of old “This Is SportsCenter” commercials.