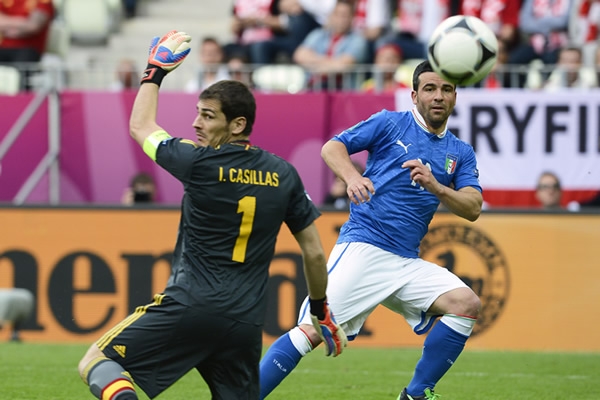 Soccer’s 2012 European championships, which started Friday and run through July 1, are obviously a massive deal on that continent, but there are incredible numbers of people tuning in throughout North America as well. The preliminary ratings for the weekend’s action on ESPN are quite impressive, ranging from 1.2 overnights for lesser matches like Ireland – Croatia to a massive 1.7 for Spain – Italy (higher than ESPN’s rating for every game other than the final at Euro 2008), and the raw numbers of viewers are very strong as well: ESPN averaged 1.7 million viewers for the four weekend matches, with a high of 2.1 million tuning in to watch Italy and Spain Sunday. Friday’s ratings weren’t quite as massive, but ESPN still drew over 700,000 for each game, impressive considering that they were scheduled while many people in North America were at work. In Canada, the ratings have been just as great and perhaps even better; TSN pulled in an average audience of 707,000 over the first six games (which would be their second-highest average audience amongst season-long sports, behind only hockey), and hauled in 1.1 million viewers for the Italy – Spain match. That’s more than double the average Canadian audience for the first six games of Euro 2008 (which were split between TSN and Rogers Sportsnet). There are plenty of reasons why the ratings have been so high in North America, but they point towards one conclusion; soccer, and top-quality European soccer in particular, is continuing to expand its beachhead on this continent.

Something that’s certainly helped the ratings thus far is the solid slate of matchups. A powerhouse pairing of reigning Euro and World Cup champions Spain and 2006 World Cup champions Italy, both of which have substantial fanbases, is an ideal match to have early in the tournament. We’ve also already seen matches featuring favourites like Germany and the Netherlands, and both of those countries have solid support in North America. Beyond those countries, there have been plenty of sides that are intriuging for neutrals to watch, including Cristiano Ronaldo-centric Portugal, offensively-talented Russia, crazily-managed Croatia and co-hosts Poland and Ukraine. Of the first six games, none really stood out as duds, and that’s definitely good for pulling in viewers. (It’s worth noting that this isn’t significantly different from Euro 2008, though: they had powerhouses (Germany) and key matchups (Netherlands-Italy), and they also had the advantage of starting on a Saturday instead of a Friday. While the Euro 2012 opening schedule might be slightly better, it’s not notably so.)

The timing has also been a factor. Most days have seen matches at noon Eastern (nine a.m. Pacific) and 2:45 p.m. Eastern (11:45 a.m. Pacific), which is pretty reasonable for most people in North America. One of the perils with European soccer broadcasts is that they’re often at quite early times, especially on the West Coast; the majority of English Premier League broadcasts tend to start at 10 a.m. Eastern/7 a.m. Pacific, which is too early for most to watch in bars and too early for some to get up. Tournament hosts Poland and Ukraine are one and two hours ahead of England respectively, so that’s part of this, but even the first game on each day’s Euro schedule has still been an hour later than standard English scheduling if you disregard time zones. That’s great for North American audiences, and that shoudn’t be overlooked. It’s also relevant that the biggest match thus far, Spain-Italy, was held on a Sunday, a traditionally big sports day and one when most people don’t have to go to work. Still, even games during the work week have drawn reasonably well; ESPN figures for Friday don’t seem to be available, but TSN pulled in 354,000 and 435,000 fans for the Poland-Greece and Russia-Czech Republic games respectively, not bad for the Canadian market in general and particularly impressive when much of your audience is theoretically at their nine-to-five jobs. (It is worth noting that Euro 2008 had the same times, though. They also had a big Sunday match, Germany-Poland, so timing alone doesn’t explain why these ratings are so much better.)

The matchups and the timing have probably helped the Euro 2012 audiences relative to general sports events. However, why are they so much larger than what we saw at Euro 2008, a very similar event with comparable early matchups and scheduling?

One answer is the increased use of personal people meters in ratings, which have tended to boost sports events across the board, but that probably doesn’t account for the whole jump. The most logical answer there is that soccer has continued to grow in North America. That’s a theory supported by other data, including the 1.033 million viewers (a U.S. record for a Premiership broadcast), who tuned into April’s Manchester derby and the 71 percent increase in U.S. viewership for the 2012 EPL season’s final day. It’s also one that there are several compelling explanations for; the U.S. national team made a strong run at the 2010 World Cup, likely sparking further soccer interest amongst many casual fans, and the quality of play and interest in Major League Soccer have both grown since 2008 as well, perhaps creating more soccer fans who want to watch the highest level of the sport. Twitter and other social media outlets may be fueling this as well; just from my own time on Twitter during Euro games (and the numbers of Euro-related trending topics every day), there are a lot of people who are primarily fans of American sports tuning in to the Euro conversations and getting engaged, and that certainly could help boost the audience numbers.

In Canada, the national team isn’t as much of a factor in popular interest (they didn’t even qualify for the 2010 World Cup, and haven’t done so since 1986), but soccer has grown in nationwide popularity since 2008. A large part of that’s thanks to the addition of two MLS franchises, the Vancouver Whitecaps and the Montreal Impact; those clubs, along with pre-existing Toronto FC, have helped draw some new fans to soccer. It also helps that Euro 2012 is a solely TSN event; the awkward sharing arrangement with Sportsnet in 2008 made it less rewarding for either network to really promote the tournament. TSN has gone in very hard on advertising this tournament, hiring some prominent soccer faces (including former England star Darren Anderton) as analysts and having them not only host pre-game and halftime shows, but do a nightly recap show as well and appear all over print and radio media promoting the tournament. TSN also has SportsCentre (based off the ESPN model; ESPN has a minority stake in TSN), the most-watched sports highlights show in Canada, and they’ve been giving Euro highlights significant play in each edition of that. That all can add up.

It’s still worth keeping these things in perspective, of course. While the ratings on both sides of the border have been strong so far, they may decline in subsequent days; live sports events during the day from Monday-Thursday aren’t as easy to sell as those on Fridays or weekends. It’s also possible that some unknown factors made these early matches particularly compelling, and later ones won’t draw as well. Still, at the moment, the Euro 2012 ratings are looking very good in both Canada and the U.S., and that probably says a lot about the prominence soccer’s assuming on this continent.