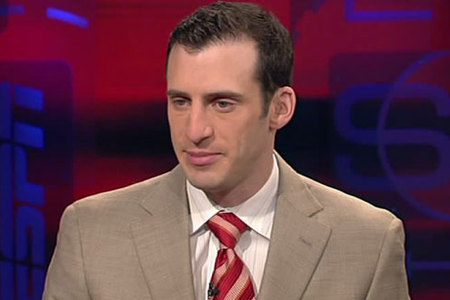 ESPN college basketball analyst Doug Gottlieb is reportedly interested in the vacant Kansas State head coaching job, which was left by Frank Martin this week when he became the head coach at South Carolina.

Gottlieb has no coaching experience, but he’s trying to put himself in prime positioning for the job by using his ESPN celebrity as a recruiting tool. Gottlieb’s logic is that every recruit who watches nationally televised games is familiar with his face, and that gives him more credibility. A pair of recent examples of coaches to go from the analyst chair to a head coaching job include NC State coach Mark Gottfried and St John’s coach Steve Lavin. Both Lavin and Gottfried had fantastic recruiting classes in their return to the game, but is that because of their previous coaching experience, or their former role as analysts?

Another example of success Gottlieb is pointing at is Iowa State coach Fred Hoiberg, who had never coached before taking the position with the Cyclones two seasons ago. However, while he wasn’t a coach previously, Hoiberg had management experience with the Minnesota Timberwolves, serving as their VP of basketball operations.

Hiring Gottlieb would be a huge risk for Kansas State, and it would be a contrast from the previous coach in Martin, who had worked his way up from coaching high school JV teams up to the Wildcats position over a span of 20 years. And going with a risky hire like Gottlieb after the unprecedented success of Martin could backfire terribly for Kansas State.  Gottlieb does have a successful playing career at Oklahoma State to point too though, as one of the top assist men in college basketball history.

There aren’t many first time coaches hired by large college programs or in professional leagues. One example happened this offseason in baseball, when the White Sox hired Robin Ventura, whose only experience was as a high school hitting instructor. In the NBA, Mark Jackson recently left the ESPN booth for the Golden State Warriors job. There is some precedence for it in other sports, but it would be interesting to see if Gottlieb could succeed largely banking on his ESPN resume in the college game.