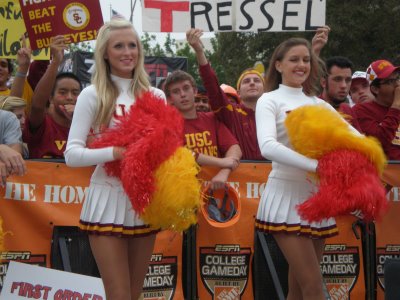 ESPN Radio and the University of Southern California (USC) today announced a multi-year agreement in which the network will have exclusive national broadcast rights for all home Trojans football games.

This marks ESPN Radio’s first nationally exclusive broadcasting agreement with a college football program and only the second such agreement in the industry (Notre Dame and IMG Sports).

“We have had a long relationship with USC which has proven to be an excellent one in many ways,” says Tim McCarthy, Sr. Vice President, ESPN Radio Play by Play & Talent Planning. “We will work closely with USC to develop ancillary marketing opportunities to touch USC fans everywhere.”

ESPN Radio will present USC games on up to 300 affiliates nationwide. 710 ESPN Los Angeles (KSPN) has been the flagship station of the USC Football Radio Network (Fresno to San Diego) since 2006.

So 300 ESPN Radio affiliates across the country will be airing USC football games this fall. ESPN and USC have always had a tight relationship, with the network relentlessly hyping up the Trojan machine during the Pete Carroll era. (Remember the awful debates declaring the 2005 USC team the greatest ever before they lost the national title game?) Now, those questions of Trojan-friendly bias are going to reach a fever pitch since the university and ESPN are officially business partners.

This could create a lot more issues when USC has a 4 PM eastern game as opposed to a 10 PM eastern game. At 4 PM on the east coast, there are plenty of games starting that would gain a lot more local interest than USC. Penn State’s games are broadcast on an FM and an AM station in State College, and the AM station is an ESPN Radio affiliate. So if the Penn State and USC games started at the same time, would the affiliate really air the USC game? That would probably cause riots.

This whole situation reminds me of the Longhorn Network, but on a national level, albeit on the radio. If you want to draw a comparison, this contract is very similar to NBC’s television deal with Notre Dame, with national rights to all home games. However, NBC doesn’t drive the national sports conversation like ESPN does. If you think that ESPN getting in bed with another school for a deal like this isn’t going to lead to even more questions of favoritism, you’re out of your mind. At least ESPN can do the next sensible thing and hire Colin Cowherd as their USC pre and post game host.