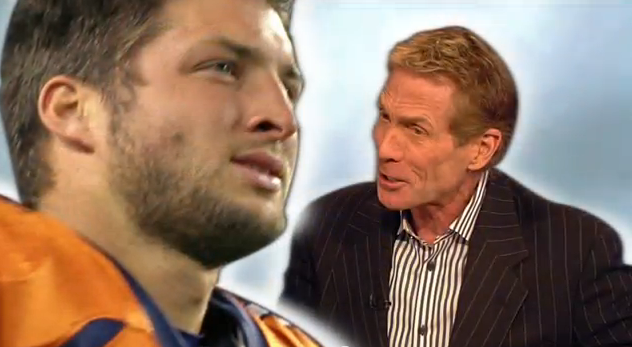 Yesterday, ESPN President John Skipper was named Sports Business Journal's most influential executive in sports.  While that's an impressive footnote to his resume, Skipper has done something infinitely more important and influential.  He's done something previously thought impossible except for an act of God or the coming of the endtimes… or both.

In an accompanying interview in SBJ with John Ourand, Skipper admits ESPN went too far in covering Tim Tebow's travails with the New York Jets.  In fact, the ESPN president personally told ESPN producers to dial back their 24/7 Tim Tebow obsession…

"I said, 'Guys, we didn't handle this very well.' Going to training camp wasn't a problem. We just stayed on it relentlessly and too long."

"The quote that I hated was from Doug Gottlieb. … I didn't love that. I want people to think about what works for the next 10 minutes might not be the best thing for us for three years. That one hit home with me."

"We've had some good discussions internally about trying to be careful. In some ways, the more difficult internal conflict is between long-term story telling and ratings. We all know that if you focus on the Tebow story, for the next 10 minutes you're going to do better. But the question is trying to take a long-term perspective and saying, 'Guys, let's not get over excited about one story and hyping it.'"

Doug Gottlieb on his time at ESPN: "I was told specifically, you can't talk enough Tebow."

That single quote from Gottlieb summarized how ESPN lost their way with Tim Tebow in the last year.  In 2011, TebowMania was partially justified because of the many miraculous victories during the regular season and playoff appearance by the Denver Broncos.  However, as a member of the New York Jets and a backup quarterback in 2012, TebowMania 2.0 was little more than a gluttonous embarrassment for ESPN with several notable and glaring examples happening almost daily.  ESPN themselves became a punchline because they literally couldn't talk enough Tebow.

ESPN made the decision to sacrifice the integrity of their brand for their daily Tim Tebow fix.  But FINALLY, FINAALLLLLLLLLY somebody in Bristol, Connecticut has seen the light and realized ESPN's coverage of Tim Tebow went a smidge overboard.  Who better than the president of the entire company?  (I always knew I liked this John Skipper, after all, he was the one responsible for ESPN's well-regarded World Cup push.)

The lack of Tim Tebow coverage on ESPN has been noticeable in recent weeks.  In actuality, there's been significantly more coverage of guys like Andrew Luck and RGIII than Tim Tebow.  Skipper's comments are the first confirmation of an intentional editorial decision to withdraw from TebowMania, though.  (Better late than never, although these comments would have meant more in October or even July.)  Even for ESPN, it was only a matter of time before they pulled back their coverage of a quarterback who has gained a grand total of 126 yards this season.

Skipper's reflection is along the lines of what I have been saying all along.  ESPN was doing more damage to the foundation of the network with its ridiculous Tim Tebow birthday celebrations and ad nauseum reporting than it was gaining in the short term with ratings.  It's really that simple.

It's a dilemma and a careful balance that faces every network in this 24/7 age.  Of course ESPN is in the television business.  They have to turn a profit and get ratings.  But they have to find a balance that doesn't eat away at their long term credibility.  Either ESPN has to focus on the long-term, respectable storytelling that made the network great… or they can fall into the trap of Linsanity and TebowMania and the next flavor of the month, choke every ratings point they can out of it, and then move on to the next obsession once the carcass has been picked clean.

(Were you even aware Jeremy Lin still plays in the NBA and not in Europe somewhere?  Yea, he's actually in Houston.  I googled it last night.  I know!)

Hopefully, for everyone involved, Skipper taking the very rare step of admitting ESPN made a mistake with Tim Tebow is a sign the network will get serious about their journalistic responsibilities again.  Hopefully, it's a sign Skip Bayless and Stephen A. Smith are no longer driving ESPN's editorial agenda.  Now that would truly be the greatest achievement of the John Skipper reign thus far.

Why is it so important for Skipper to set this platform moving forward?  ESPN drives the national sports conversation.  If ESPN offers more sensible coverage of a given topic, viewers and sports fans everywhere will be better served in the short term and the long run.  The respect and trust of those sports fans is what is most important to the present and future of ESPN, not #FreeTebow hashtags and party hats.