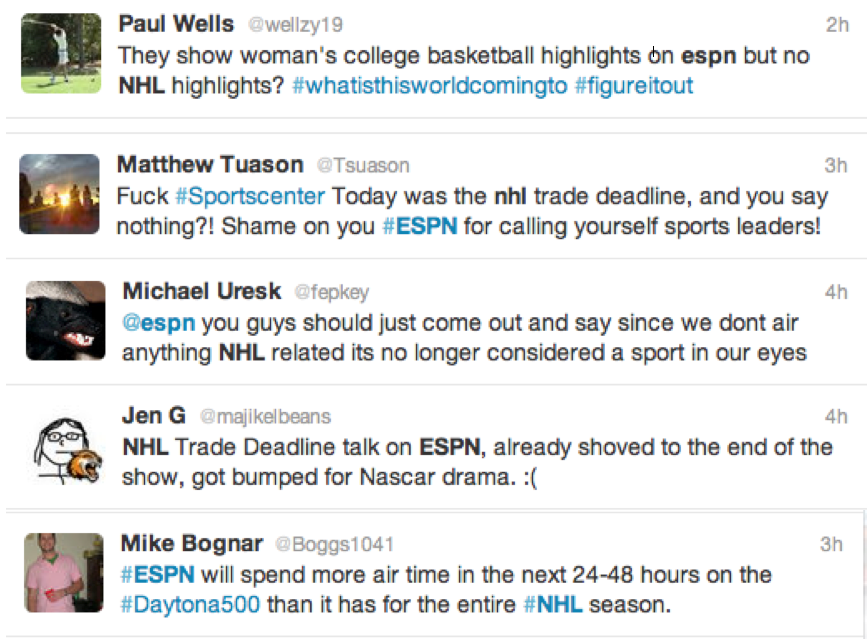 For those of you who attempted to visit the site yesterday, my sincere apologies as one of Bloguin’s three servers went down and didn’t get back up for a LONG time. What KO’d the server you ask?

The NHL trade deadline where a lot of our larger hockey sites essentially had tons of people hitting refresh every dozen seconds hoping to see a big deal come through as the deadline came near.

All in all 15 trades were completed, although the biggest news of the day was probably the lack of movement by Columbus and Washington.

Having to deal with Hostpocalypse and wanting to get caught up on all things Trade Deadline, I made the mistake of believing SportsCenter would be my salvation. I’d heard some analysis on the radio and perused some links across the network but believed SportsCenter would be a nice little cliff notes version of what happened, winners and losers, best moves, etc.

Tuning into the late night SportsCenter, I found myself totally miffed that the Trade Deadline didn’t get a single second of play whatsoever. On a day where no other pro games were taking place with the NBA off, the NFL combine completed, and a pretty light day of college basketball, ESPN’s credibility as a news organization took a major hit by ducking the subject entirely.

I know many will chime in saying ESPN is an entertainment company and this isn’t shocking given they don’t have any connection with the NHL and I totally agree and see that side. Still though, when you basically have a monolopy over sports news as they do with SportsCenter, you would think one of the biggest days on the NHL calendar would get a little bit of airtime right? I was working under the assumption that there were four major pro sports but apparently not.

So what was more important last night?

– manufactured Luck vs RG3 post combine chatter. It’s great that ESPN employs two on air personalities to do mock drafts, yet the whole sport of hockey only has Barry Melrose.

– Daytona 500 highlights more than a handful of times. That’s understandable but probably a bit of overkill too.

– Shocking news that the Rams want to trade their draft pick.

– To ESPN’s credit, about a minute of NHL highlights.

I am not even a big hockey fan. In fact, I don’t think I’ve watched more than a few hours of hockey this season (I’ll tune in during the playoffs and know this admission probably just killed all my street cred with NHL fans).

By comparison, think about how much ESPN inflates the importance of the NBA and MLB trade deadline. The diehards for those sports love it, the casual fans often get swept up in too, and people who don’t care probably just change the channel and subject themselves to reruns of Bones. (I’ve watched one and a half episodes….are they getting it on or what? will they? Please someone tell me in the comments.)

That’s clearly where ESPN either shrewdly or maliciously depending on how you look at it justifies giving the cold shoulder to the NHL whenever they can. They’re afraid trade deadline hyperbole could hook some random fans who are just locked into all things ESPN and is out to lunch on their sports regional channel and NBC Sports Network programming.

Sure you can get your NHL highlights (usually buried towards the end), but in terms of really sinking your teeth into the sport and talking shop, ESPN is never going to do that unless they have to.

Essentially, they’re going to do the bare minimum needed to cover the sport. With the NHL locked into a long term deal and the departure of Matthew Barnaby with no replacement named or in the works, ESPN is content to keep letting that minimum threshold of acceptable coverage languish.

Even going to ESPN.com shows more of the same. At first glance, it seems as if ESPN.com (not counting the regionals) employs the same amount of full time columnists to cover the Miami Heat on their super awesome Heat Index site than they do to covering the NHL. One wonders if the Knicks will soon get their own super awesome ESPN website as well. Wouldn’t that be Linsane?

Certainly that is well within their rights. But when you tout yourself as THE Worldwide Leader and puff your chest out about your commitment to journalism, it’s just disingenious.

The NHL is growing and all bets are that despite the slow start, NBC Sports Network will too. By snubbing a major sport so blatantly, you’re losing a lot of long term credibility with a pretty significant audience and people remember that.

While ESPN will continue to soar like a phoenix, at the end of the day they need to remember that hockey and MMA are growing and have passionate fanbases. Being bitter that you couldn’t force those two sports into bad television deals doesn’t mean you need to become a scorned lover about covering them going forward.

Perhaps ESPN needs to change their slogan to “Fair and Balanced” to match a rather large cable channel that routinely tilts coverage a certain direction and dimisses a large audience. They seem to be doing quite well though.