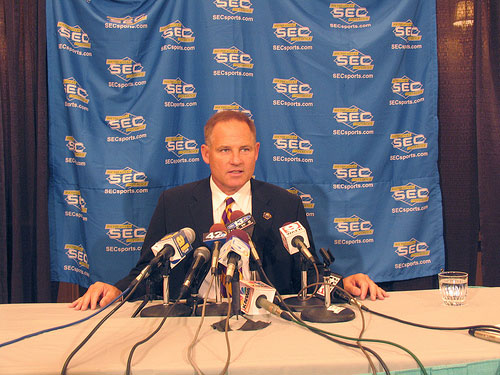 The Worldwide Leader In Sourcing Controversies is at it again. Les Miles has decided to stay at LSU thanks to a generous contract extension after a prominent flirtation with Arkansas Tuesday. Brooks Melchior of Sports By Brooks first reported on Twitter Tuesday afternoon that Arkansas had made Miles a five-year, $27.5 million offer to take over as their head coach, and New Orleans Times-Picayune reporter Jim Kleinpeter soon confirmed that with his own sources while giving Brooks credit for being first.

At first, ESPN followed suit. First Karl Ravech credited Brooks during halftime of the Indiana-UNC game aired on ESPN. Then on the 11 p.m. edition of SportsCenter, anchor Steve Levy relayed the report and cited Brooks' tweet. However, that clearly didn't sit well with the suits in Bristol.

Deadspin's John Koblin reveals the ESPN internal wire received a "IMPORTANT: DO NOT CREDIT SPORTS BY BROOKS FOR THE ORIGINAL STORY ABOUT MILES HAVING AN OFFER. CREDIT REPORTS" message shortly thereafter. That's what ESPN did in Jonathan Coachman's on-the-air take at 1 a.m., and their on-the-web treatment only cites The Times-Picayune.

It's not surprising that ESPN did this, especially in the college football realm. They've become so famous for taking reports from other networks' college football reporters like Bruce Feldman (who used to work for ESPN) and Brett McMurphy (who now works for ESPN) that Twitter types have joked Feldman's name has been changed to "Sources."

ABC's Josh Elliott (who was at ESPN before that) openly spoke about the Worldwide Leader's internal demands not to give credit to outside sources at Blogs With Balls 4 in New York in September 2011, and the issue's only escalated since then. The sourcing problem's become so widespread and so reflective of ESPN's problems with journalistic credibility that Sports Illustrated's Richard Deitsch retweeted Deadspin's story on this latest one with an "As you wish, Lord Vader" appended in front. By our Star Wars analogies, though, the problems go well beyond just Skip Bayless. Along with Elliott's quote, Koblin's reporting is a bombshell giving tangible proof to ESPN giving direct orders to not credit specific outlets.

Why does this matter? If it's only other media outlets who suffer, then this practice of refusing to give credit is merely underhanded tactics that go against most journalistic ethics. That's a media problem, but not one that would really affect the vast majority of ESPN consumers. However, a strong argument can be made that ESPN is doing its readers, listeners and viewers a tremendous disservice by misrepresenting where these reports come from, and the Miles situation represents a case in point. When anonymous sources are used in any report, the credibility of the report shifts from the source itself to the outlet relaying the anonymous comments; viewers and readers need to know which outlet that is so they know how much credence to give any particular piece of information.

Brooks hasn't always been right, but he has a strong track record of breaking college football news, so attributing the piece to him (and to the Times-Picayune) provides viewers with the information necessary to make an informed judgement on the report's validity. (Also, it's worth pointing out that those reports appear to have been absolutely right-on; the reports weren't that Miles was leaving, but that he'd been made a very specific offer to leave, and that appears to be the case.) That's beyond good journalistic ethics; it's good journalistic service to your audience.

Losing sight of that in a quioxtic quest to have all your information appear like it was found in-house not only hurts your company's journalistic reputation, it also damages the quality of your product. Furthermore, it hurts the reputation of the talent themselves, like Levy and Ravech (and presumably others) who want to do the right thing, but are directed otherwise by management. ESPN should keep that in mind the next time they tell their staff not to credit sources properly.