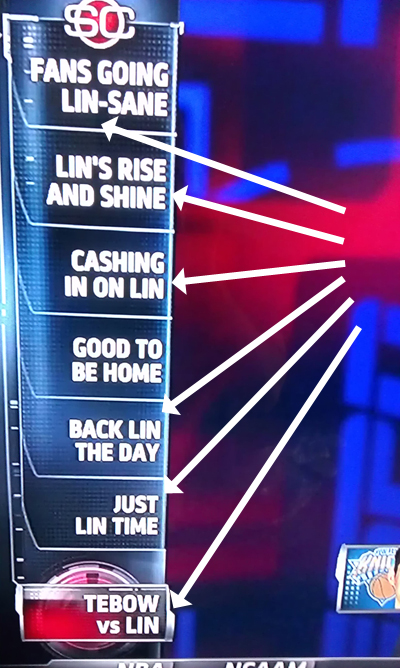 Earlier, I blogged that ESPN would be wise to not overmanufacture debates and tangents regarding Jeremy Lin’s story as many fans run, hide, and fight anything jammed down their throats with such vigor.

For those holding out hope ESPN would temper their coverage and not crank up the manufactured debate and fluff machine, the evidence below doesn’t bode well for those still in recovery from Tebowmania induced comatose.

The overly obnoxious and cute Lin puns are already wearing thin and the continued tying of Lin to Tebow only taints Lin’s story with an ominous cloud of skepticism. As I said earlier, comparing the two is not like comparing apples to apples but rather comparing an apple to an Apple Iphone.

If you were curious, the Tebow vs. Lin feature has already run twice today and clocks in at 3 minutes and 8 seconds, approximately the same amount of time Tim Tebow is actually a decent quarterback per game.

ESPN and the media aren’t going to pivot away from this story anytime soon and rightfully so. For now though, I’d settle for just a single day without Lin and Tebow in the same sentence and an end to the Lin puns that are just as painul on the ears as Carl Lewis singing the national anthem at this point.