News broke this afternoon that Andy Pettitte had decided to make a comeback in the majors, and that he had signed a minor league deal with the New York Yankees. Jack Curry of the YES Network had it first, tweeting the news out at 12:30 PM. Note the timestamp on the tweet.

When ESPN reported the news, they gave the credit to their own reporter, Buster Olney. Olney’s tweet about the signing went out at 12:36, six minutes later than Curry’s tweet. In fact, before Olney even tweeted out his report, Curry had tweeted twice more about the signing.

Once Curry found out about the lack of credit, he went on a rampage, starting off by calling the lack of credit “shameless and embarrassing”. As of 7:55 PM on Friday night, Curry had retweeted no less than 80 tweets from readers offering their support for his breaking of the story and shaming ESPN (and Olney) for a lack of credit.

This isn’t the first time this has happened with ESPN…hell, it’s not the first time it’s happened with Olney. If Olney is indeed taking Curry’s report, this practice is really disgusting from the “worldwide leader in sports” or the worldwide leader in not attributing credit. Your call. The shoe was on the other foot a week and a half ago, when Jason LaCanfora of NFL Network didn’t credit Chris Mortensen for breaking the news of the Colts cutting Peyton Manning.

For his part, Olney sent out a response on Twitter Friday night defending his record and saying his work was independent of Curry… 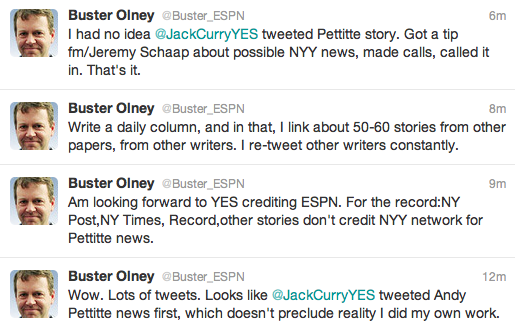 So essentially, Olney is claiming credit for a story that was already broken because he was working on it too. I don’t think it works that way. Do you have sympathy for Olney in this case or should he and ESPN be crediting Curry and YES for the Pettitte news?