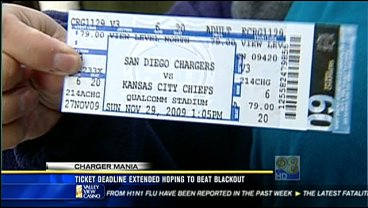 The FCC has asked for public comment in regards to the NFL’s longstanding Blackout Rule, adding more momentum to fans’ pleas that the reviled and dated rule be repealed. This comes on the heels of Ohio Senator Sherrod Brown’s public comments calling for elimination of the nearly 40 year old rule.

This past season, 16 games were blacked out in their home markets. Over the last decade about half of the NFL (15 teams) have been subjected to a blackout with some clubs like the Raiders, Jaguars, Chargers, Lions, Bengals, and Buccaneers often finding themselves not on television to the dismay of fans. In addition to the many blackouts in recent history, many teams are forced to creatively dump tickets by selling them on the cheap to sponsors.

Fresh off the NFL’s renegotiated television extensions that will bump revenue a whopping 60%, the mental gymnastics of explaining the logic of the Blackout Rule is beginning to become more strenuous (from PFT via USA Today)…

“The blackout policy is very important in supporting NFL stadiums and the ability of NFL clubs to sell tickets, keeping our games attractive as television programming with large crowds; and ensuring that we can continue to keep our games on free TV,” NFL spokesman Brian McCarthy said in a statement to USA Today.  “Playing in full stadiums with thousands of fans is an important part of what makes NFL football an exciting and special entertainment event, both live and on television.  We have a limited number of games and do not want to erode the incentive to buy tickets.

I’ve read that quote above a handful of times and I still don’t understand how it makes sense. PFT lays the wood against the NFL’s stance by pointing out that changing ticket prices or stadium sizes could eliminate this problem…

“Ultimately, the issue becomes whether the teams are setting prices accurately.  Every team wants its home games to be televised locally, since the broadcast of a game represents a three-hour infomercial in support of the franchise.  But if teams simply can’t sell out on a consistent basis, the teams need to reduce the prices of the tickets until demand and supply properly intersect, or the teams need to win more games and hope nature will take its course.

Regardless, with each passing cycle of multi-billion-dollar TV contracts, it’s hard not to think that the box office receipts have gone from being the primary source of revenue to a secondary stream of cash, at best.  Games played in stadiums that, for most teams, received direct or indirect public funding should be available for the public to enjoy, regardless of whether the team that plays in the stadium knows how to properly ensure that all tickets to the game have been sold.”

The NFL also has to realize that there have been a lot of improvements to the experience of watching games on television. The live experience needs to continue to be differentiated so that teams can depend on both revenue streams without the crutch of a blackout rule that reduces the exposure teams are afforded at the local level.

At a high level isn’t it better for local teams long term to have hundreds of thousands of local fans watching on television regardless if there are 65,000 or 70,000 people at the game? Typically teams that are blacked out aren’t exactly setting the world on fire so I doubt there are a lot of fans going “Well since my 3-9 Bucs aren’t going to be on television, I NEED to see that game in person and am willing to pay $100 for a ticket, parking, and foam finger to be there.”

Meanwhile the massive amount of fans who would be watching a blacked out game aren’t able to rebuild an affinity to a team that may be rising up from rock bottom with a new core of players that could compel them to by tickets for future games. The 2009 Lions stick out as a team that lost a lot of momentum locally as young talent was unable to be seen live on television in some memorable games.

All in all with NFL ratings, attendance, and revenue all crushing, it seems the political climate, timing, and economics are right for the NFL to be forced to do away with one of the most unfriendly policies sports fans have been subjected to.