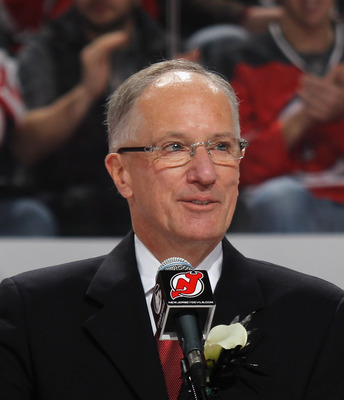 One of the saddest parts of the NHL Lockout is the absence of the best play by play man in sports – Mike Emrick. The voice of the Stanley Cup Finals has seen his already prodigious reputation grow in recent years as one of the top broadcasters in the profession.  Doc called Water Polo at this year's London Olympics, but with no NHL games, we haven't seen him since London.  That is about to change as NBC has finally found a way to bring Doc back to your living rooms.

NBC has announced Doc Emrick will call the action from the 2012 Hilton HHonors Skate America this Sunday, the first event of the ISU Grand Prix season.  He'll be there with NBC's figure skating analysts Scott Hamilton, Sandra Bezic and Tracy Wilson.  Apparently that extra "H" is not a typo, by the way.  NBC has 6 weeks of Figure Skating coverage lined up through December 9th, so at least Doc will be able to stay loose until the NHL finally stops bludgeoning the sport with a sledgehammer and torturing fans with their supervillainous ways.  (Which may actually be happening sooner rather than later with recent reports of progress in talks.)

Nevertheless, the novelty of Doc Emrick calling triple salchows and axels instead of slap shots and glove saves may be worth watching.  If anybody can get me to tune in for a second of figure skating outside the Winter Olympics, it's Doc Emrick… and Doc Emrick alone.