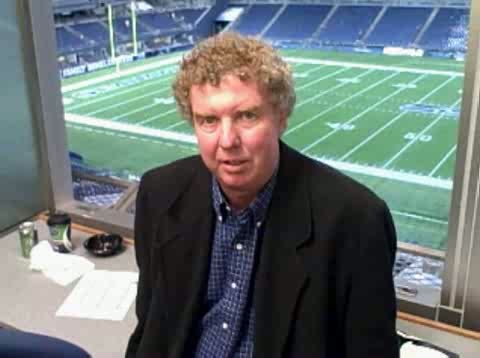 The cheering of Matt Cassel's injury by Chiefs fans and subsequent public decree from Eric Winston has led to a mostly constructive discourse on fan behavior.  Predictably, it's also produced the opposite.  Jason Whitlock wrote a "Fox Sports Exclusive" in which he turned the tables on Winston, calling the Chiefs tackle a sickening hypocrite and somehow making him the villain.  I would link to it, but I got too distracted while watching The Wire.

While it's depressing to think Whitlock's contrarian trolling still has a national platform, a much more light-hearted, facepalm-inducing perspective came from that purveyor of America's conscience – Dan Shaughnessy.  In a Boston Globe column, Shaughnessy cut a switch and took the real villains in this saga to task.  Fantasy football players, bloggers, and tweeters.

"It’s surprising that this happened in Kansas City. It would have fulfilled all of our cliches if the episode unfolded in Philadelphia, where they boo everybody. Kansas City is part of the fan friendly Big Middle of America. KC fans will be unfairly maligned for this one situation.

It’s an issue about civility in America today. It’s about accountability. It is about angry fantasy football players who do not know how to look someone in the eye, or hold a face-to-face conversation. It is about fanboy bloggers who kill everyone and everything under the brave cloak of anonymity. It’s about instant tweets fired from the safety of your basement. It is about anonymous bullying with the World Wide Web serving as the new bathroom wall."

What Dan Shaughnessy has done here is create a hierarchy of people who scare old guard sportswriters that depend on vague generalities, stereotypes, and blanket statements as crutches.  First are all those angry 36 million fantasy football players that can't function in a first world society.  Because, you know, "FANTASY!"  Second on this twisted staircase of fear are "fanboy bloggers" that hide under an evil cloak of anonymity.  In Dan Shaughnessy's world, nobody would actually be proud to call themselves a blogger and there are no such things as this or this or competent female sports bloggers.  Finally, and worst of all, are the estimated 100 million active Twitter users who apparently won the Great Basement War of 2012 and kicked the fanboy bloggers out onto the streets.

In a nutshell, these are all independent people who can form intelligent thoughts on their own without waiting for Dan Shaughnessy to enlighten the masses.  Fantasy football, blogging, and tweeting means the sports column is no longer the hallowed ground it once was – that is what troubles Dan Shaughnessy the most, not some fans cheering in Kansas City.  That and rap music.

When asked for further comment, Shaughnessy had this to say…