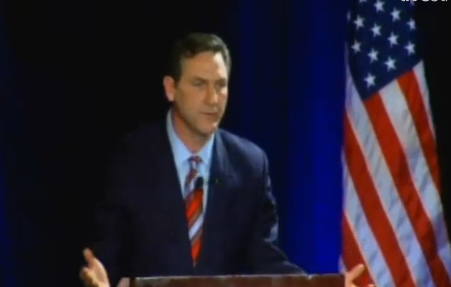 I don’t know what else to say about Craig James anymore. Every comment he makes just makes my head hurt more and more. Last Wednesday during a speech, James talked about the US government possibly signing a treaty with the UN that would ban the usage of firearms and was caught with his “Pants on Fire” according to Politifact:

“If anybody in this room has not been following this, the United States, Barack Obama and Hillary Clinton are negotiating with the United Nations about doing a treaty that will ban the use of firearms,” James said. “I want you to know that the Second Amendment is about to be busted and if we don’t stand up and stop this and scream and make sure that Washington, D.C. hears us, then we’re in trouble with the Second Amendment.

This doesn’t necessarily seem like a big deal, just political back and forth. Except for the fact that James is ridiculously off-base with his allegations. James spokesperson Meredith Turney said that James’ comments were made in support of a piece of legislation offered up by Kansas senator Jerry Moran, which “bars U.S. funds from being committed or spent in connection with treaty negotiations to restrict the Second Amendment rights of citizens or to regulate the domestic manufacture, assembly, possession, use, transfer or purchase of firearms, ammunition or related items.” I really don’t understand how James’ sensationalistic comments really support that, as they came off as an attack on the current administration as opposed to anything else.

Of course, it could be that James has resorted to more sensational rhetoric with his campaign on the march to obscurity and polling numbers becoming more dismal.  Public Policy Polling describes James’ campaign by saying, “As Craig James has become better known he’s just gotten more and more unpopular.” His favorable/unfavorable split is now just 14% favorable to 32% unfavorable.

The current administration has said that it doesn’t support any restrictions on the Second Amendment, and a provision of the discussed treaty says that countries have a right to arms for “self-defence and security needs and in order to participate in peace support operations.” In other words… what we have today in America.  Here’s the summary from Politifact:

We found no evidence of Obama or Clinton indicating they want the UN conference on an arms trade treaty to ban the use of firearms; the recent speech by an administration underling states the government will not back a treaty that infringes on the Second Amendment.

This claim runs so substantially counter to reality, it’s ridiculous. Pants on Fire!

So essentially, James either didn’t know what the hell he was talking about, or completely twisted this to get a reaction from a crowd. Well done Craig, you’re more of a politician than I thought you could be!