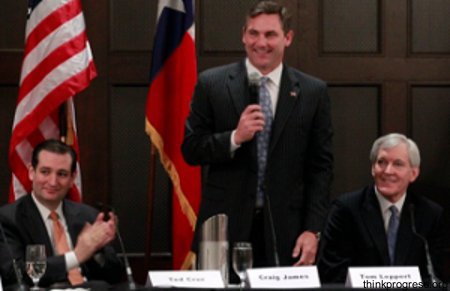 Former ESPN announcer Craig James is in the news again, and unsurprisingly for those who have followed his previous controversial escapades, he’s riling people up. However, this one has nothing to do with his son, Mike Leach, gifts taken at SMU or Google bombs, but rather his nascent political campaign for a Senate seat (which remains very, very nascent). Perhaps in an effort to overcome his poor polling numbers, James made some very controversial statements about homosexuality in a debate Wednesday, blasting former Dallas mayor Tom Leppert (an opponent for the Senate seat) for marching in a gay pride parade and saying that homosexuality is a choice, and one that will be punished by God. The most interesting element of these comments by James might be what they mean for his chances of ever returning as a sports commentator (spoiler alert: they probably won’t help). Here are the highlights of what he said:

JAMES: I think right now in this country, our moral fiber is sliding down a slope that is going to be hard to stop if we don’t stand up with leaders who don’t go ride in gay parades. I can assure you I will never ride in a gay parade. And I hear what you’re saying, Tom, but leaders – our kids out there people need to see examples.”

MODERATOR: Do you think people choose to be gay?

MODERATOR: It’s not in the genes?

JAMES: I think that you have to make that choice. But in that case right there, they are going to have to answer to the Lord for their actions. We should not give benefits to those civil unions.”

Regardless of your personal opinion on James or his stances here, we can probably agree that this doesn’t bode well for his chances of working at ESPN or another major network again if he loses his Senate bid. (As Scott Stinson of The National Post pointed out, it’s also interesting that James is saying more controversial things now that he’s entered politics, the reverse of the typical pattern.)

James was already hated by many college football fans for his role in taking down Texas Tech coach Mike Leach, as well as his frequently-bland brand of analysis, but fans’ dislike of a particular announcer isn’t necessarily high on Bristol’s priority list. (If it was, James likely would have been ditched long before he left to run for Senate.) Protests by aggreived groups appear to be much more of a consideration, though, as evidenced by recent events like the firing of editor Anthony Federico over a headline many viewed as racist and offensive. If James returns to ESPN, it likely won’t just be college football fans who protest, and that may be enough to convince them or any other network to go with a less-controversial (and likely better) analyst instead.