In what I’d imagine to be many people’s worst fear using the social web, Florida Times Union writer Vito Stellino seems to have accidentally tweeted out a link to a pornographic website. The tweet has since been deleted, but below is a screenshot of the now infamous tweet. 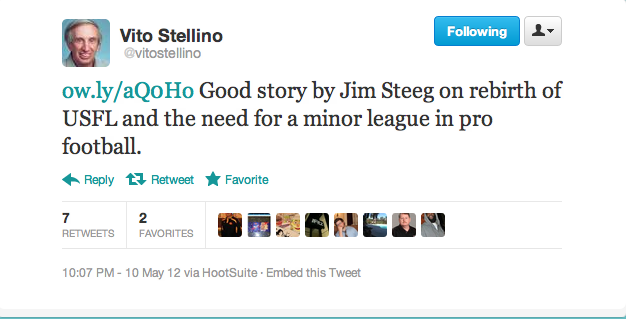 Unlike your normal shady Twitter links that promote acai berry drinks, free iPads, and so on, everything except the link seems to be something Stellino would tweet out. Common sense would tell you that at some point the offending link was copied or cut, and unfortunately Stellino never grabbed the USFL link to properly paste into his tweet. The end result being that a quick auto URL shortener coupled with user error utilizing good old command C likely has Stellino in some hot water.

With over 4,000 twitter followers and the link up for over 40 minutes garnering many retweets, needless to say many people mozied on over to X Hamster where an auto play video of (EARMUFFS!) sexual intercourse (EARMUFFS!) occurs.

Before we highlight some of the more comedic reactions on Twitter, I’ll just add that while this was horrible and terribly embarrassing, I’m hoping Stellino doesn’t lose his job over this. He was likely at home, on a personal computer, feeling frisky, yada yada yada, and felt like tweeting a good football story when fate was unkind. I put this in the “shit happens” bucket and he has to be absolutely mortified given his readers and peers will certainly have a field day with this.

I have no idea if Stellino is a good reporter, nice guy, has a history of doing lewd things, etc, but if this is just a one time one in a million mistake for the ages, I’d hope his employer would show some compassion as long as Stellino shows some accountability for what he did. If Jason Whitlock can keep his job for tweeting out racist remarks, then I’d hope Stellino can do the same for making just a terrible mistake that most people find an odd mix of humiliating and hilarious. The majority of folks who are truly outraged would be appeased by an apology and maybe some disciplinary actions. Life can go on and Jaguars fans can go back to worrying about Blaine Gabbert and dreaming of getting Hard Knocks.  Reaction tweets after the jump…

@vitostellino He definitely went out there and executed on that blonde. It gives a whole new definition to ‘Ground-and-Pound.’

@vitostellino is into some freaky stuff. Do you, bro. Do you.

His account was “hamstered.” RT @Mengus22: Vito Stellino has to go with “my account was hacked”, right?