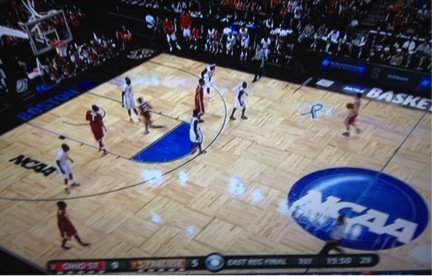 CBS and Turner have done generally an excellent job with the tournament. However, if there was one thing some fans have universally griped about (other than the fact that Kentucky is just ridiculously good), it would be the odd over the court camera angles that have been employed at times during tournament games.

Used sporadically in different scenarios at different angles it has been distracting. Essentially the equivalent of introducing a skycam to basketball, the experimental camera angles haven’t been well received by most fans who quickly clamor for a return to the standard mid-court zoom. (I just named the default camera angle….not bad, eh?)

On a conference call yesterday, coordinating producer Bob Dekas commented on the use of the camera angles and seemed to downplay the prevailing feedback about them.

“We’re using an angle that has been used on NBA telecasts. We’ve used it in previous years. We try not to overuse it. It does get some reaction, a lot of it positive. Some of it negative. It’s a different view. It shows how the players are spaced in a better way. But I don’t think we have overused it. It will be used sparingly as it has been in the past.”

When watching games where I don’t have a rooting interest, they’ve been annoying yet tolerable. However when watching my alma mater, I plead guilty to cussing out these angles and blaming them for missed free throws and turnovers. Totally reasonable right? It’s the camera angle that the players aren’t even aware of. Anyone else guilty of this? 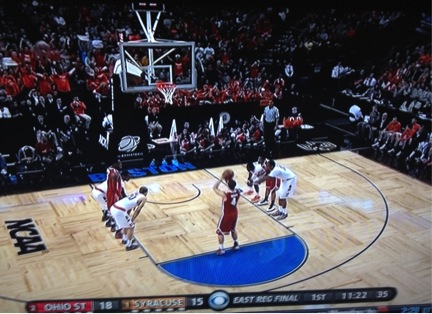 Seriously though, I am three times as more likely to have a stroke when someone is on the line when CBS cuts to this view over the standard one. I guess it adds extra intrigue and excitement as you don’t have a good view of the shot at all… but the mental health of fans should be first and foremost!