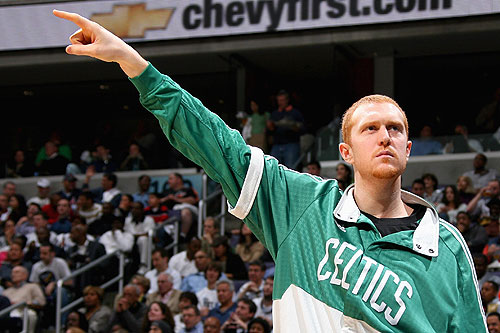 Brian Scalabrine, or the White Mamba as he's come to be known, has been forced into an early retirement.  No, not because of injury or illness, or anything nefarious.  Sadly, Scalabrine's time at the end of the bench seeems to have come to an untimely end because no team wanted him, literally.  But still, because of Scalabrine's success at… well, I'm not sure what he was successful at as a player, but Scal had two intriguing options to continue his life in basketball.

With the nation holding its breath, Scalabrine has turned down a coaching job with the Chicago Bulls to work for Comcast New England as an announcer and on-air personality for their Boston Celtics coverage.  Somehow, this makes total sense for one of the most popular Celtics players in recent memory.  Seriously.  Scalabrine scored a grand total of 723 points in his Celtics career, yet the fans would go wild for him at the drop of a hat!  Even a glimpse of the red head on the bench would mean more to Celtics fans than a KG dunk or an amazing Rondo assist.  And let's face it, no matter how great a practice player or "coach on the court" he was, would any NBA player take the White Mamba seriously as an authority figure?

So, it seems Scal has made the right choice for his second career.  Scalabrine will begin to ply his TV trade in earnest when he announces around a dozen games for the Celtics this year, along with some studio work.  Who knows, maybe he can be the heir to Tom Heinsohn's BeanTown throne in the near future.  Certainly Scalabrine has proven that anything with him is possible.