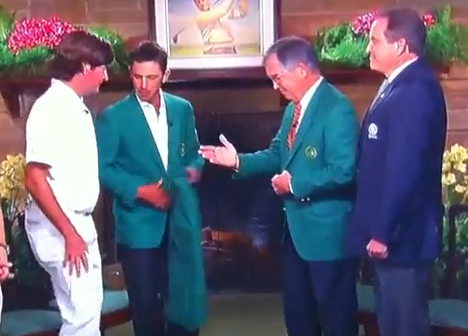 Sure, Louis Oosthuizen’s double eagle was amazing.  Yes, Bubba Watson’s impossible snap hook wedge off the pine straw to win the green jacket was incredible.  However, the best Masters moment of 2012 came in famed Butler Cabin at the green jacket ceremony.  That’s when we witnessed the biggest handshake fail ever seen on worldwide television.  For those of us that live in the 21st Century, it was great to see Bubba Watson diss the standard bearer for everything sexist, wrong, and backwards with Augusta National, Billy Payne.  (In what other sporting event does the tournament/event chairman need his stupid moment to welcome the play by play announcer and say what a “special” week it has been and bask in the warming glow of nostalgia.  Please.)

As great as it would be to imagine Bubba Watson giving a giant middle finger to the dinosaurs at Augusta National with his handshake diss, I’m afraid a frame by frame analysis of the situation proves that just didn’t happen.  In the most scrutinized handshake since Suarez/Evra, here’s what really happened…

Here it appears Billy Payne isn’t going for a handshake with Bubba Watson.  Nobody, not even one of the old geezers at Augusta, shakes hands by meekly offering an outstretched palm while looking down at the ground.  What Billy Payne may be doing is presenting the donning of the green jacket like he’s some sort of southern gentlemanly version of Vanna White.  At the very least, it’s a tornado of mixed signals for anyone standing across from him. 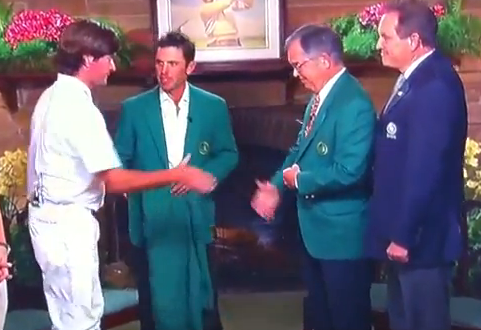 This is the moment everything goes wrong.  Alas, Bubba sees the outstretched hand of Billy Payne and goes in for the handshake.  At the same split second, the Augusta Chairman withdraws his hand for some unknown reason.  Perfect timing for this attempted handshake to turn into a catastrophe.

3) Billy Payne comes back for the handshake, Bubba goes for Charl Schwartzel 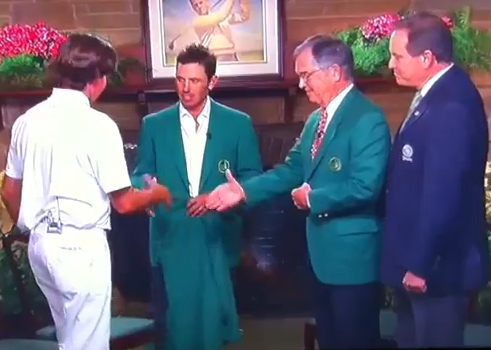 Here’s where this Masters moment goes from memorable to legendary.  Seeing Billy Payne withdraw his hand, Bubba then goes to 2011 Masters champion Charl Schwartzel while the Augusta chairman is left looking like a doofus.  You can tell Billy Payne senses the awkwardness of the moment and instantly regrets the missed handshake with Bubba.  Now he wants the handshake.  He’s standing straighter, he’s looking further up, but Bubba has already moved on.

4) Billy Payne catches nothing but air 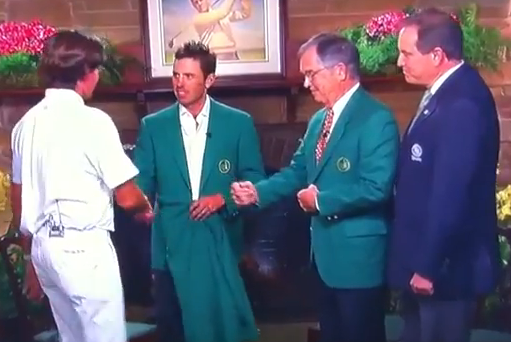 The money frame!  The Augusta chairman is left clutching nothing but thin air.  Congratulations to Bubba Watson on not just his first major championship and one of the greatest shots in the history of golf… but also for leaving us with this picture.  Take that discrimination. 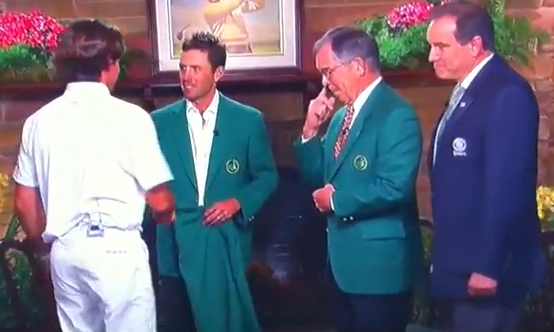 After the disastrous handshake fiasco, Billy Payne has to do something with his right hand, so he goes for the old nose/face scratch like nothing out of the ordinary has happened here.  Maybe this wouldn’t be such a bad move if you’re at a social gathering or mixer and nobody was watching, but millions around the world were tuned in to this green jacket ceremony.  Instead of the defeatist nose scratch, he should have just turned around and gone for an embrace with Jim Nantz.  It would have been less awkward.