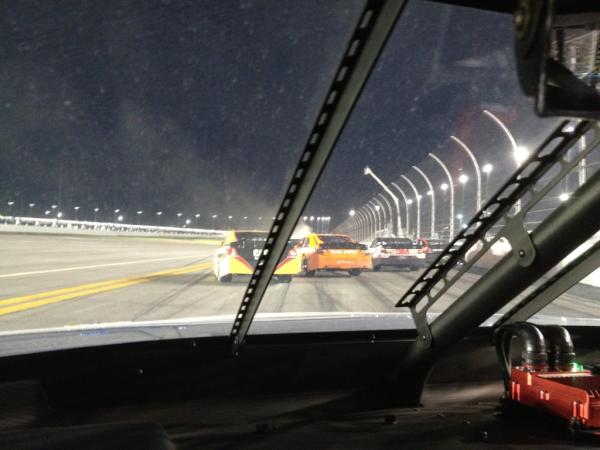 This year’s Daytona 500, which stretched from Sunday through early Tuesday morning, was memorable for so many different reasons.  Exploding jet fuel, fire, rain, red flags, crashes, Danica Patrick’s Daytona 500 debut (and first Daytona 500 crash), unpredictability, and ultimately a second Daytona 500 victory for Matt Kenseth.  But given all that happened in Daytona this weekend, the most incredible element was Brad Keselowski, driver of Roger Penske’s blue deuce, tweeting from his phone… during the race!

Other sports have come down hard on in-game tweeting, and before you make any jokes about the dangers of tweeting and texting while driving (it’s true kids), Keselowski’s first tweet was sent out during the red flag where he twitpic’d the above image of the cars stopped on the backstretch.

Very quickly, fans of the Daytona 500, or casual observers stunned by the bizarre crash that brought the race to a halt, were retweeting Keselowski’s picture all over the Twitterverse.  Could an athlete really be tweeting during his sport’s biggest event?  (Yea, drivers are athletes and NASCAR is a sport… deal with it.)  It was true!  Somewhere, Darren Rovell was shedding tears of joy over this momentous moment in sports and Twitter history (and tweeting Keselowski naturally).  Keselowski continued to interact with fans and tweet out these pics from the Daytona backstretch during the two hour red flag period… 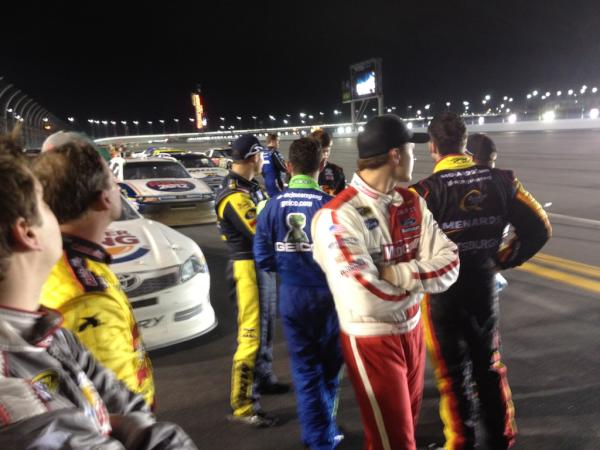 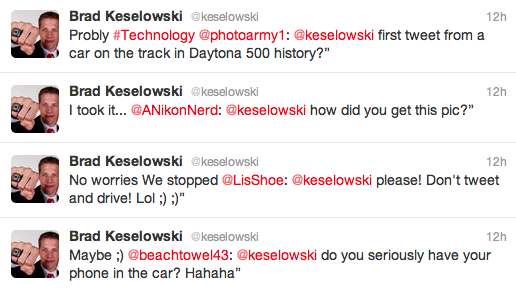 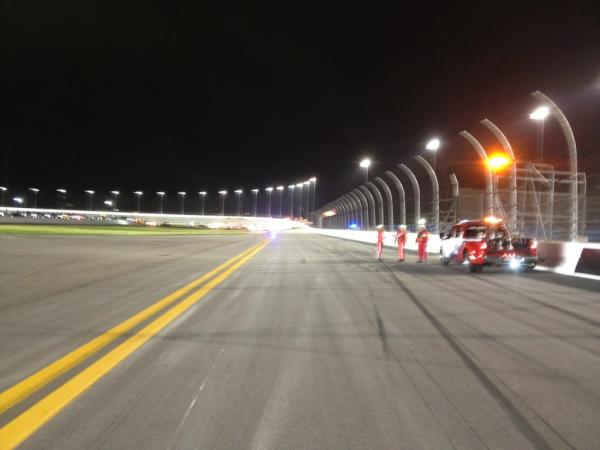 Keselowski’s Twitter page became one of the highlights of the Daytona 500 coverage and Fox was smart to make mention of it.  In fact, I’ve always enjoyed Fox’s NASCAR coverage – especially the booth of Mike Joy, Darrell Waltrip, and Larry McReynolds.  They’re never going to be the most technically gifted broadcast team and the way they talk probably isn’t going to resonate with 100% of America.  However, they are NASCAR through and through, have a great chemistry in the booth, and always make the race more entertaining.  The same can be said about the studio and pit road reporters.  In fact, it’s the way that Fox has embraced NASCAR since their beginning over 10 years ago that always makes it strange to me how Fox treated soccer like an alien subject.  Fox embraced “Boogity, Boogity, Boogity” and spoke directly to NASCAR fans, never trying to transform it or mold it into something else.  Fox even did well during the rain and fire delays to keep viewers tuned in when absolutely nothing was happening… one of the ultimate tests of any broadcast team.

But back to Keselowski, as soon as the red flag was lifted he got back to racing and was involved in a heavy collision soon after the green flag dropped.  I jokingly wondered if his phone would make it through the accident.  A couple minutes later, we found out it did as Keselowski sent out these immediate post-wreck tweets…

Perhaps seeing Keselowski’s phone survive the crash is a new testament to the safety of these stock cars.  My favorite part of Keselowski’s tweets is remembering to hashtag them so they can be part of the #Daytona500 conversation as if he’s watching the race from Danville, KY.  Keselowski’s tweets are simply fascinating because it’s a new use of one of the most powerful platforms in the sports world.  All over sports, companies, athletes, and everyone in between are thinking of breakthrough ways to use Twitter and social media to amplify and highlight what they do.  Too often, networks will shove Twitter or tweets down your throat without any real substance.  (OMG!!!  LeBron tweeted about Tim Tebow!!!  OMG!!!)  Last night, Brad Keselowski set the bar and picked up over 100,000 followers in one night!  That’s a stratosphere reserved only for Conan O’Brien and Charlie Sheen!

I wonder if seeing the positive reaction to Keselowski’s tweets will encourage other major sports to relax their rules on tweeting during games.  Why couldn’t Kevin Durant tweet a picture from the Thunder bench?  Why not have Jeremy Lin tweet a pic of him and Spike Lee at courtside?  Let’s see Chad Ochocinco twitpic an angry Bill Belichick from the sidelines.  Perhaps we’re onto a new innovation with sports and Twitter… and a NASCAR driver is at the center of it thanks to a red flag caused by exploding jet fuel.  It was that kind of night in Daytona.