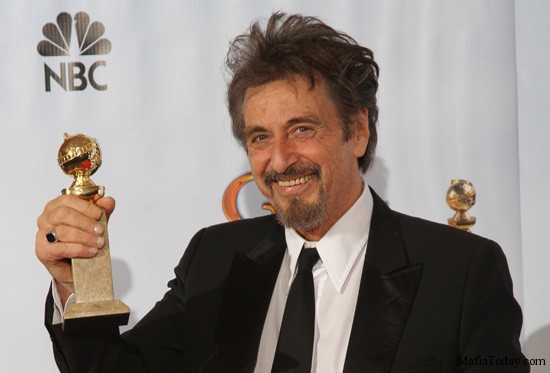 Joe Paterno lies in his final resting place while his former school is only in the beginning stages of recovering from the biggest university scandal in recent memory.  And yet, the full extent of Paterno's story is only just beginning to be told.  Joe Posnanski's Paterno bio has become a #1 New York Times Bestseller.  Now, that book is being considered as the basis for a movie based on the life of Joe Paterno.  And the man being considered to play Paterno on the silver screen is one of Hollywood's biggest legends – Al Pacino.

Although many major pieces like a script, a director, and a movie deal still need to fall into place, Deadline reports Pacino is scheduled to play Paterno in the planned film.  Pacino has portrayed classic movie characters like Michael Corleone and Tony Montana and even has experience as a grizzled football coach in Any Given Sunday.  More details from the Deadline report:

"ICM Partners next week will be taking a package for a movie about former Penn State head football coach Joe Paterno with Al Pacino attached to play the man called JoePa by most students at Happy Valley. The package will be built around Joe Posnanski’s biography Paterno, which is now atop The New York Times Bestseller List in its second week. Pacino’s manager, Rick Nicita, will produce.

The narrative arc of the movie that will be shopped is obvious. A man becomes the winningest coach in college football history and builds a powerhouse football program that turns him into a campus deity. When his former defensive coordinator Jerry Sandusky is revealed to be a pedophile and it comes out Paterno was told and helped hide the scandal, the coach was summarily fired. He died shortly after of cancer — and many feel of a broken heart — and the school had little choice but to raze a fabled statue of Paterno just as the NCAA dropped the hammer with sanctions against the school that included removal of Paterno’s wins going back to the cover-up. Sandusky was found guilty on 45 counts of sexual abuse against young boys and is expected to spend the rest of his life in prison."

Joe Posnanski's book has been heavily critiqued as not being critical enough of Paterno's actions in dealing with the monster Sandusky.  Would a movie based on the book based on Paterno's life follow suit?  What kind of portrayal would Joe Paterno receive?  The story of the deceased coach is one of the most complex imaginable.  Here was a man held up so long for his integrity and doing things the right way, undone because he valued his football program over truth and justice.  It's not like we don't know how this story ends, though.  Joe Paterno died of cancer in disgrace.  It's a sad chapter in an even larger, sadder story.

There's no question a brilliant actor like Al Pacino playing such a complex man like Joe Paterno would be compelling theater (assuming we don't get the 88 Minutes vintage that is).  However, part of me feels uneasy about the rush to take Joe Paterno's story to Hollywood when the healing process is only just beginning for the victims of Jerry Sandusky's sexual abuse and Penn State's cover-up.  Is the big movie payoff supposed to be the Paterno statue coming down?  Posnanski (or someone else) telling Paterno he should have done more?  Penn State football taking the field again?  None of those endings seem to take into account the true scope of what transpired.

An important point we all seem to be losing is this – what happened at Penn State is not entirely encapsulated in the life and times of Joe Paterno.  It can't be that simple, no matter how interesting the arc of the coach's life.  But in the months since Jerry Sandusky's trial, Paterno has predictably been the centerpiece.  We've gone from a statue to a book and now a movie all about a coach and a man whose myth has gone from Greek god to Greek tragedy, but one whose myth still remains strong.