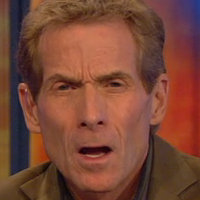 Ed Note: With Election Day just under two weeks away, we want to fully prepare you for the most important race of 2012.  No, not that Presidential thing or whatever it is, AA's Decision 2012!  Besides, whoever your candidate of choice is, we can all agree Craig James is worse.  But, is the Senator-to-be a strong enough candidate for AA's Mount Rushmore to hold off the challenges of Skip Bayless, Matt Millen, and Chris Berman?  With such a tough vote on the horizon, we asked some influential bloggers from around the sports world to give an endorsement for their candidate of choice and reasons why you should vote for them to be immortalized on AA's Mount Rushmore.  Up next, Erik Malinowski of Deadspin "embraces" Skip Bayless' candidacy.

Where do you begin with a man like Skip Bayless? For a non-announcer to even reach the final step of having his mug enshrined in the hallowed Mt. Rushmore banner atop AA should be all you need to know, especially if you’re blissfully unaware of his existence. (In that case, dear reader, please stop reading, move away from the Internet, and do not spoil your day any further.) But, obviously, we all know who Skip Bayless is, because he’s everything that’s wrong with sports media today. A dead-ringer for Bill Nye the Science Guy, though with a smarmy, ogreish personality and the intelligence of your standard supermarket pineapple, Bayless is the most perfect embodiment of the rampant, troll-driven negativism that lives in the web’s darker corners. He brings it to ESPN2 every weekday morning and makes the vast majority of sports journalists feel instant shame in their profession. That’s some power.

It’s funny because for all the attention Bayless gets from the Worldwide Leader, he doesn’t have the pedigree of, say, a Rick Reilly, who, for all his numerous faults, has a shelf full of trophies he could throw in your face if he so desired. The most famous factoid about Skip Bayless is that his brother, Rick, is a world-famous chef. Skip, meanwhile, has been a middling newspaper columnist for most of his career, at least until First Take blew up a few years back. After leaving the Chicago Tribune in a childish huff back in 2001, Bayless defected to the San Jose Mercury News. At the time, his former boss said that “he will definitely be the most talked-about person in the Bay Area.”

He was not, and I would know. I moved to the Bay Area in mid-2002, after having interned at The Boston Globe, so I knew a thing or two about bloviating, inane sports columnists. I read Bayless’s stuff in the Merc, sure, but it wasn’t anything special. Perhaps looking back, one might see the beginnings of the alpha-troll persona he’s perfected since. I didn’t see it then, but ESPN did. They started putting him on morning and afternoon shows across the ESPN family of networks. That, in turn, spawned a regular gig on Cold Pizza, which begot First Take, which begot the unfortunate state that now surrounds us.

With Bayless, there’s a visceral unctuousness that comes through the TV screen and slaps you across the face, like a nearby garbage dump wafting through your living room window. I could think of no greater detriment to the world of sports media than to have any child or high school student or college intern turn on Skip Bayless in the morning and think to themselves, “I want to be like that one day.” And you rarely, if ever, hear any respected industry people defend Bayless, not in the way that, say, Michelle Beadle speaks admirably on behalf of one Colin Cowherd, as though he’s some sort of harmless, goofy, misunderstood ham.

Bayless has no Beadle, and maybe that’s because no one’s ego looms larger than his own. For a man that has nearly 900,000 Twitter followers, he never responds. (Ever.) Each 140-character missive is a one-way jaunt to nowhere. I’m curious, does he ever even peak at what utter vitriol lives in his replies tab? What personal strength and absolute disdain for his fellow man it must take to resist the urge to lash out just once to someone. Bayless claims to love debating and arguing, but it’s just another hollow gesture from a sad egomaniac. Even professional athletes are now refusing to watch their own SportsCenter highlights for fear of encountering his constant absurdity.

And while very much a self-made institution, he’ll always be, to some extent, a puppet of overzealous ESPN producers who’d rather us “embrace debate” than value self-worth, logic, and professionalism.

Like the diseased lungs that grace cigarette packaging in some European nations, the head of Skip Bayless should so similarly adorn the Mt. Rushmore banner that welcomes AA’s visitors every day. With each ensuing visit, they’d be reminded of what happens when you make the wrong deal with the devil. If someone offers you that pill, friend, you best take this other one.

Somehow, I haven’t even mentioned any of the well-known Tebow theatrics, Bosh-baiting, LeBron-hating, or other myriad sideshows he’s engineered over the years. Why? That’s all noise. He’d have you think it was a kind of prestige, some grand takeaway from a salient point he’s just rocked your world with, but it’s not. It’s just noise. It’s a piece of the Bayless mystique, sure, but there’s much more to be considered.

Berman, Millen, and James are all fine candidates, surely, but do your civic duty and #VoteBayless when the time comes. If you were running, he’d vote for you.