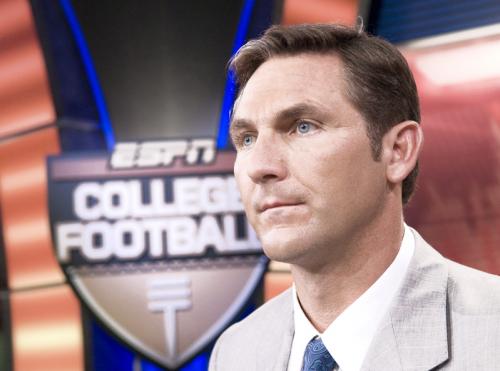 Ed Note: With Election Day just under two weeks away, we want to fully prepare you for the most important race of 2012.  No, not that Presidential thing or whatever it is, AA's Decision 2012!  Besides, whoever your candidate of choice is, we can all agree Craig James is worse.  But, is the Senator-to-be a strong enough candidate for AA's Mount Rushmore to hold off the challenges of Skip Bayless, Matt Millen, and Chris Berman?  With such a tough vote on the horizon, we asked some influential bloggers from around the sports world to give an endorsement for their candidate of choice and reasons why you should vote for them November 6th to be immortalized on AA's Mount Rushmore.  What better way to wrap up than a college football Saturday with the incumbent, Craig James, presented by Adam Kramer of Kegs 'n Eggs.

Craig James needs our support, guys. Put away your checkbooks and open up your hearts.

After a failed political campaign—one where he got 4% of the Texas vote for the Republican seat and then asked for money after campaigning because he exhausted his personal funds – James has a chance to remain a part of our everyday lives. We simply cannot squander this opportunity.

I know what you’re thinking. Craig James is out of your life for good, gone, and you’ll never see that face or hear that piercing voice again. Before I tell you why you’re wrong, let’s first examine why his extraordinary list of being terrible is above and beyond any face you could possibly etch into a giant rock.

First, let’s get back to the politics. James had the gall and the arrogance to believe he could actually be good at this. The result was the kind or train wreck we desired and anticipated, but he left a wonderfully paying job at ESPN only to be embarrassed on the political front. I… suppose we should thank him for this.

As for the job at ESPN, his magnitude of bad knew no bounds. First, he was absolutely ghastly in the booth. He tortured our ears with midweek monstrosities on ESPN’s Thursday night college football showcase, and our scars still feel fresh. He also hired a PR firm to get Texas Tech coach Mike Leach fired and used his platform at ESPN to accomplish this goal.

And then there are the hookers; those poor, sweet, innocent five ladies of the night that were slayed at James’ behalf according to the Internet, which is never wrong. Only a meme, you say? Just ask those poor females if we should view their deaths as a simple meme.

Craig James has been able to diversify his ability to be terrible, and his impact stretches well beyond saying ridiculous things like the names you will consider for this honor. He wasn’t just bad at his job; he was bad at multiple jobs. And make no mistake about it, Craig James is going to land another gig calling college football with some network looking for an added “boost.” I don’t know when or where it will happen, but it will happen.

Don’t remove him from the mountain or your memories just yet. Think of all the bad he accomplished and everything he’s yet to destroy.

Vote James and Remember the 5.