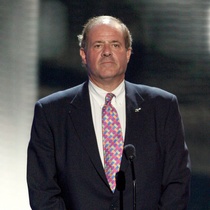 Ed Note: With Election Day a mere two weeks away, we want to fully prepare you for the most important race of 2012.  No, not that Presidential thing or whatever it is, AA's Decision 2012!  Besides, whoever your candidate of choice is, we can all agree Craig James is worse.  But, is the Senator-to-be a strong enough candidate for AA's Mount Rushmore to hold off the challenges of Skip Bayless, Matt Millen, and Chris Berman?  With such a tough vote on the horizon, we asked some influential bloggers from around the sports world to give an endorsement for their candidate of choice and reasons why you should vote for them to be immortalized on AA's Mount Rushmore.  First this week, Ken Fang of Fang's Bites endorses Mr. BACK, BACK, BACK, BACK himself, Chris Berman.

It is a great honor to be asked by Awful Announcing to explain why Chris Berman should be on its Mount Rushmore of bad announcers. This year's nominees, Skip Bayless, Berman, Craig James and Matt Millen all have their reasons to be given the dubious distinction of a place on Awful Announcing's Mount Rushmore.

When I was approached to write this guest column, I thought of the positives and negatives of each man. Of course, their negatives greatly outweigh their positives which is why the fine people at AA have nominated this quartet.

In this column, I will outline the reasons for Boomer to be on AA's Mount Rushmore. After you read this, I hope you will feel the same way.

There was a time when Chris Berman was considered to be a breath of fresh air in sports broadcasting. For some, it's hard to believe, but this is true. When ESPN began in a galaxy far, far away, Berman was one of the men who helped to shape SportsCenter. Along with Bob Ley, Tom Mees, Sharon Smith, Lou Palmer, George Grande, Greg Gumbel and others, SportsCenter became the destination for sports fans who were starved for information. No longer did fans have to wait for their local sportscasts to get scores and highlights.

When ESPN obtained the rights to the NFL in 1987, Berman was considered the natural choice to host its studio programming including what became Sunday NFL Countdown and NFL PrimeTime. In 1990 when ESPN obtained the rights to Major League Baseball, Berman became the play-by-play man for the late Tuesday Night Baseball game. Then in the mid-1990's, Berman added Monday Night Football to his resume as ESPN took over ABC Sports.

Somewhere along the way, Berman stopped being that breath of fresh air. Some point to those infamous videos that surfaced on Deadspin or the legendary "You're with me, Leather" that turned the tide on Berman. Whatever or whenever it was, the ESPN original has become one of the most polarizing figures on sports television.

Social networking has added an additional element to Berman. When he calls the U.S. Open or the MLB All-Star Home Run Derby, the vitriol on Twitter reaches amazing heights. And let's face it, his play-by-play is marginal at best. But that did not stop ESPN from assigning him to the second Monday Night Football game during the Opening Weekend back in September. While Berman tried to pass it off as being surprised at the assignment, James Andrew Miller, the co-author of "Those Guys Have All the Fun: Inside the World of ESPN" noted that he had long yearned and most likely lobbied to call a MNF game.

Then there's his play-by-play of the League Division Series for ESPN Radio. If you've listened to Berman, you'll realize that he's calling TV on radio. It doesn't work. It never has. There's rarely a count, a description of where the infield or outfield is playing, whether the batter is left or right-handed or if the wind is blowing out. These are all basic descriptions to an experienced radio MLB playcaller, but for Berman, they're just forgotten. We have to make assumptions for ourselves. And yes, the annoying "BACK! BACK! BACK!" is always present.

Berman's act has not changed over the years. How many times have you heard, "Whoop!" for a fumble? What about "He! Could! Go! All! The! Way!"? And trying to show his knowledge of local landmarks during the Home Run Derby, "That ball almost went to Topeka!" which was gleefully corrected by George Brett this year. By the end, you're reaching for a bottle of Tylenol.

One of the more infamous Berman moments was when he was hosting a rare SportsCenter following a Sunday Night Baseball game. Instead of the top story being Yankees-Red Sox or a NASCAR race, it was Boomer pointing out that the lead story was him hosting SportsCenter with various video clips of HIMSELF! Most likely, it was a producer who put together that open, however, it gave the appearance of Berman saying, "Look at me!"

It's hard to believe that NBC wanted to lure Berman from ESPN to work on the NFL and be an Olympics host. This is true. NBC sought the services of Berman in the 1980's but he chose to remain with ESPN. You can decide whether the viewer has been the beneficiary. Perhaps we are the beneficiaries since we have yet to be subjected to Berman tossing to curling or figure skating.

Chris Berman should be on the Mount Rushmore because of his body of work. In this vote for the newest edition, read all of the columns, then decide on the "best" choice. Hopefully you'll choose Berman as the most "deserving" to be on Awful Announcing's banner.

I'm Ken Fang of Fang's Bites and I approved this message.