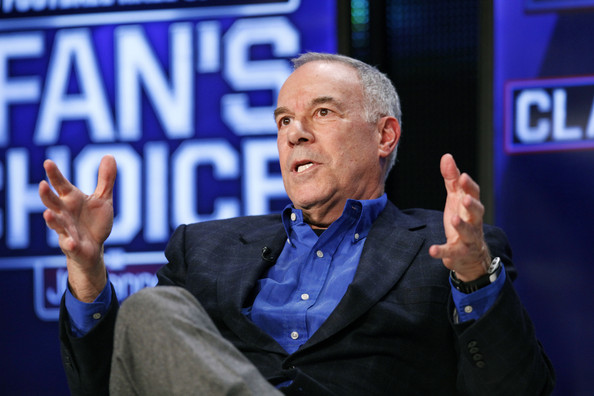 Yesterday, I was greeted with the news I've been dreading ever since I learned of Steve Sabol's illness. The legendary NFL Films President passed away at the age of 69. I knew that I wanted to share some personal thoughts on what Sabol and NFL Films has meant to me over the years, and that will come tomorrow. I also wanted to know more about Sabol and what life was like at NFL Films. What was it like to work with the man who changed the American sports landscape in such a profound way?

I was lucky enough to get 15 minutes with Jim Jorden, a producer who joined NFL Films in 1989. Below are some of his fondest memories working with Sabol including why he turned down a pay raise from Art Modell, his awards for spectacular failure, what it's like at NFL Films, and the one thing Vince Lombardi said to Sabol.

"He was very much into improving someone. He was a great people person in that he always made you believe that you could do better. He was a hands on guy. He’d come into your office and watch the rough cuts of your show.  Even this last year during Hard Knocks he was sick and wasn't around, the guys put up a sign – WWSD. What Would Steve Do."

"All of the great ideas that came through NFL Films, those are all his ideas. All of the great innovative things were Steve’s ideas. The follies films, slow motion (the idea came from The Wild Bunch shootout). He was a creative genius."

On what Sabol was most proud of at NFL Films

"He loved the camera department. He would always hang with those guys, go to the games to be with those guys to encourage them to get good shots. He had a saying that was called FLAP. FINISH LIKE A PRO. So every year, towards the end when everyone is tired, you’ve worked the whole year, and you’re worn out and you get down to the playoffs he’d say 'Come on now. This is the most important time of the year. It’s not about how you start, it’s about how you finish. You got to FLAP Now.'"

Keeper Of The Flame

"Steve will never ever be replaced by anyone in anyway."

"He started a saying as there is a picture in Steve’s office signed by Vince Lombardi. It says “To a schmuck if I ever knew one, keeper of the flame.”

The Importance Of Product

"NFL Films started shooting all of the games in film since the 60’s. In the 80’s they had a chance to go to video as everyone else was going to video. But they decided to go with film as they wanted to not have to rely on television footage. If you think of all the other sports leagues, there probably isn't any other league that shoots all of their own footage like NFL Films does.

In the 80’s though, the NFL wanted to go to video like everyone else. At the time Art Modell who was leading the committee in charge of NFL Films wanted to give Steve a big raise. Steve said, 'Why don’t you put that money towards film equipment so we can keep shooting film. I’d rather have that than the money.'

That’s how important the product was to him. Steve never believed in a marketing plan or business plan. He prided himself in not knowing what those things were. He’d say “I got out and make movies that I like, that I think people will like, and that’s how we’ll be popular."

"He was always about the storytelling. He would say it doesn't matter if anybody knows the story or knows how it turns out, it’s all about how you tell it. Probably one of the things he liked the most was on ESPN Classic there was a show called Lost Treasures, and Episode 3 was the whole story how NFL Films started shooting sound and Steve was really the one who started doing it.

Don Shula was the coach of the Colts at the time, and it was him and George Allen of the Redskins who were the two guys that Steve really convinced to be around them and let them shoot sound and that’s how the sound element of NFL Films really got started. That’s something Steve was proud of and enjoyed telling as it told the origin of sound before anyone else started doing it."

"You can’t tell the history of the NFL without mentioning NFL Films. They documented every play of every game since the 50’s and they have an archive that goes beyond that. The innovative programing they have like the behind the scenes shows, with the sounds of the players, allowed for the personalities of the players to be developed away from the field. They gave voices to faces and emotions to faces that no other sport did."

"There is no other studio like NFL Films. Everyone is under one roof. It’s like an old Hollywood studio from back in the day. People in Mt. Laurel are incredibly sad because his spirit is in that building. He designed all of the artwork in the building. If you go in that building there are photographs of current players, past players, of NFL Films cameramen.

If you walk around that building you’re looking at the history at the history of the league and you realize everyone got a shot. Everyone at some point got an opportunity be on top. What did you do with your opportunity? And that’s what people there will do now."

He Cared About People