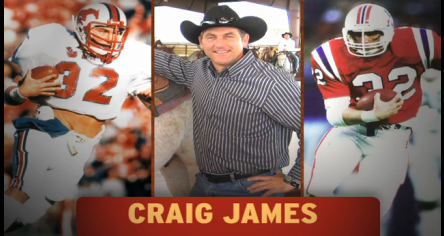 Later tonight, Craig James will finally lose spectacularly in his bid to become the Republican nominee for the United States Senate in the state of Texas.  James will then move on to some other endeavor which hopefully keeps him at a safe distance from any college football broadcast.

So before the Craig James campaign officially ends tonight, we have to take one last look back at the “highlights” and “best moments” from his campaign which has gained enough momentum to place him barely above “Other” in the last poll, but still within the margin of error.

The signs were pointing towards a run for office when James founded Texans For A Better America around this time last year and released this trailer for the organization that promised to save America, one dark electrical closet at a time…

“As our nation drifts farther away from the things that made it great, Texas must lead the charge to restore our shared values.  That’s why Craig James created Texans For A Better America.”

It was in late November a source told our sister site Crystal Ball Run that James was going to free college football fans from his tyranny and enter the campaign trail.  James didn’t deny the report in a statement and it was made official when ESPN announced his departure on December 19th.

Then, the campaigning began… the glorious, glorious campaigning.  The greatest hits are after the jump…

First, the James Campaign actually had to address why “Craig James killed five hookers while at SMU” showed up way too often in the Google searches of the Texas Senate hopeful.  Because when “killed five hookers” is associated with your candidate, it’s best to get in front of the story.

Ever heard of a Google Bomb? bit.ly/wmFUr9 They’re a headache, but they won’t slow down this campaign.

Then there was his appearance on Fox News in late December when he said of his qualifications for Senate, “I ate a lot of mayonnaise only sandwiches and ketchup only sandwiches.”  It was here he introduced the “Real Street” theme that would become one of the signature lines of the campaign, whatever that actually means.  Oh, and there was a promise to fight evil, but no word on whether or not that pledge included finding the real killers of those five dead hookers.

His first ad was basically an ode to Rick Perry, ya know, before Perry became an SNL caricature and before James endorsed Rick Santorum.

James continued his rhetoric that would make Elmer Fudd proud by promising to “kick the skunks out of the bushes.” He also admitted to taking benefits at SMU, although he claimed they were insignificant.  Because that’s precisely what Washington needed – someone who took cash from boosters but denied it for years.

In February, James continued his “Real Street” message by saying he will “never ride in a gay parade” amongst other tolerant, respectable, and endearing statements.

There was the “Mike Leach is a bully” ad, because why let silly things like depositions and facts to the contrary get in the way of your version of reality on Real Street!

There were also thoughts on his broadcasting career and the spawning of the mythical creature known as John Q. Texan…

And finally, the poll numbers.  As the James campaign has limped along, it has fluctuated wildly from 4% to 2% and finally to 3%, which produced one of the great screencaps of 2012 on the eve of the primary. 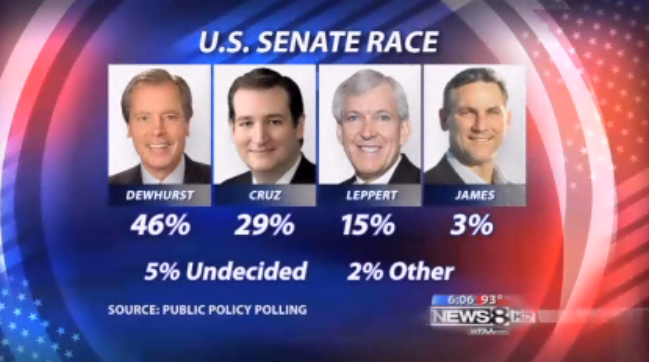 It’s not all lost for Craig James though, in spite of his blowout loss in the Texas Senate race that reaches its conclusion today.  He won at least one prestigious vote in the past year.