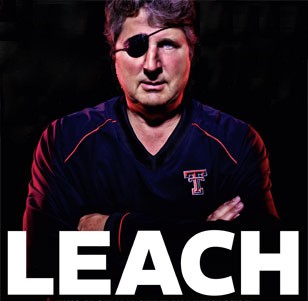 Time for your daily episode of The Young & The Bruceless.  In this week’s episode, we find out that Lou Holtz is the real father of Adam James, Victor and Jack battle for the future of Newman Enterprises, and Mike Leach continues his scorched earth policy against the “leader.”  Leach has been relentless in his continuous mission to blast Bristol, Craig James, James’ PR firm, and Texas Tech brass in every way imaginable during the publicity tour for his new book.  In a recent stop, Leach went on Tony Bruno’s show and brought out the heavy artilery once again… this time going after ESPN for the neverending controversy surrounding his co-author, Bruce Feldman.  Larry Brown has the full audio from the interview, but it’s Leach’s choice of words for the [insert pseudo-disciplinary word here] of Bruce Feldman that is most interesting.  Here’s Leach’s quotes…

“Every step of the way he had permission from ESPN to write it,” Leach said of Feldman. “He has written permission. The chapters they’re sensitive about are all in the words of the perpetrators, so that’s what makes it powerful. Evidently ESPN didn’t like the way it came out — they’re not comfortable with the facts — so [Bruce] did what any journalist would do he wrote the facts down in the appendix of the book.

“ESPN claims they didn’t suspend him. We’re just arguing definitions there. Bruce virtually disappeared, hasn’t written anything, didn’t go to SEC media day. They don’t like the word ‘suspended’ [they] tell you he was never suspended. Perhaps they like the word ‘kidnapped’ better.”

Leach is sticking up for the man that helped him write his book… but ouch… kidnapping might be a little too harsh for the reasonably minded individual.  Although now that I think about it, Dan Akroyd and Daniel Stern very well could have been off camera during Feldman’s Pac 12 media day cameo.

While stories like this continue to trickle out, Bruce Feldman’s induced Twitter silence is approaching a month.  With college football season rapidly approaching, this story is going to have to break one way or the other and reach some kind of resolution.  (We hope.)  Either Bruce comes back and truly “resumes his assignments” or he fades away into the Bristol night for good.

While we’re at it, let’s hope Mike Leach “resumes his assignments” in the broadcast booth this fall as well.