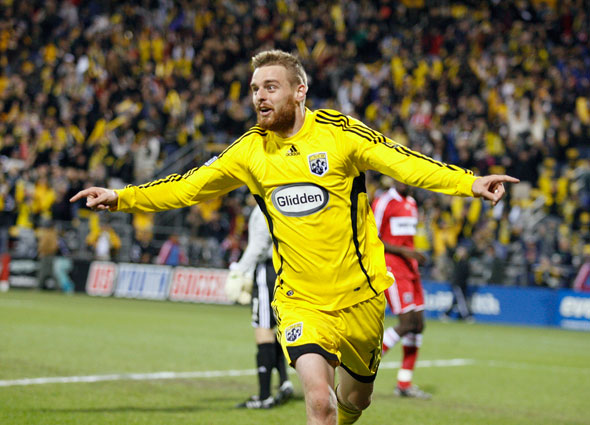 The first new sports entity to join the expanding NBC Sports empire is officially Major League Soccer (including Eddie Gaven of my hometown Columbus Crew, pictured above).  Reports today indicate MLS has inked a very favorable deal with the NBC/Comcast/NBC Sports Channel conglomerate.  The best sports media writers in the biz have been all over the story today, so you can read Deitsch or Ourand for all of the details.  In short, the league will have exposure on broadcast television with 4 MLS games (2 regular and 2 post-season) and 2 U.S. Men’s National Team games appearing on NBC.  Meanwhile, 45 MLS games and 4 USMNT games will appear on the artist formerly known as Versus, the NBC Sports Network.

In essence, MLS has kept their partnership with ESPN (who will still carry plenty of MLS and USMNT games, including the MLS Cup) and has exchanged their package with FOX Soccer for the new NBC/NBC Sports venture.  At first glance, the move has several advantages for the growth of MLS as a league and the continued growth of soccer in the United States.  So, just who are the winners and losers of this potential rights deal…

Winner: MLS And Soccer’s Growth In The USA

Yes, yes, I know, you’ve heard it a hundred times before.  Soccer is going to take over the USA! Blah blah blah!  But, if our podcast today with Ian Darke should tell you anything, it’s that people in the soccer community believe in the potential of MLS to grow the game domestically.  Yes, we’ll always flock to the best the sport has to offer, hence the success of the EPL on ESPN.  But, the domestic league has lacked a television partner who is equally invested in the growth of the league.  Heck, even FOX Soccer treated the MLS as an afterthought compared to more talented leagues around the world like Serie A and La Liga.  It’s not like ESPN treats the league any better.  Ask yourself when was the last time you saw the league standings on SportsCenter?  The MLS on NBC and NBC Sports Channel will be able to reach more homes than FOX Soccer while gaining more attention than it does on ESPN…

The ability for NBC/NBC Sports Channel to devote air time to highlighting the top players, personalities, and storylines of the MLS is truly what’s missing from taking the league to the next level. And with the commitment NBC has shown to growing hockey after their time in the wilderness, MLS couldn’t have found a better partner to help grow the league on television.  In addition to proper pre and post-match coverage, one could easily visualize additional hours of content devoted to covering MLS and the Men’s and Women’s National teams.  As long as NBC follows the template of ESPN’s soccer presentation and doesn’t dumb down their coverage, MLS could finally be heading in the right direction.

The artist soon-to-formerly-be-known as Versus has been looking for an additional sports package to place alongside the NHL, Tour de France, and Elk Fever.  They struck out with the Pac-12’s new football package, but finally succeeded in capturing the non-ESPN MLS deal.  Certainly you shouldn’t kid yourself, it’s not like MLS coverage will suddenly draw millions of eyeballs to TV sets just because it’ll be on a new channel.  But, the rights package is almost all reward with no risk, if the numbers of around $10-$12 million per year are to be believed.  To put that in perspective, the NHL’s last contract with Versus was for around $75 million per year, which was then increased to $200 million per year in the most recent agreement.  So, $10 million is just a drop in the bucket.  And, if NBC Sports can show success in taking the MLS to new heights, it may encourage other deals when other television rights are available in the future.

Undoubtedly, the only real loser in this entire situation is FOX Soccer.  How does a company that claims to be the best source for soccer coverage in the USA not televise any MLS games?  If anything, losing the MLS pushes FOX Soccer further into niche territory where only the ultimate Eurosnob soccer fans will reside.  Sure, they’ll still keep their slice of the EPL and other international leagues as well as the Champions League.  But, every time they’ve sought to move out into a broadcast platform to grow their niche audience, (see this year’s Champions League Final), it’s been an embarrassment for FOX.  Losing the domestic league and more USMNT matches will only further isolate them.  At least MLS fans will rejoice that they hopefully won’t be subjected to FOX Soccer’s second-rate game production.  That’s right, Soccer Night In America didn’t fool me one bit!

Too Soon To Tell: ESPN

The only real mystery in this entire scenario is how the new deal between MLS and NBC Sports affects the WorldWide Leader, ESPN.  On one hand, ESPN continues to air the most important MLS and USMNT games, such as the MLS Cup, World Cup qualifiers, and tonight’s high-profile friendly against Mexico.  The new deal with NBC will expire in 2014 to parallel the length of the current agreement MLS has with ESPN.  If anything, the move of MLS from Fox Soccer Channel to a more high-profile network confirms ESPN’s mission since the 2010 World Cup to grow the presence of soccer on American television.

But, MLS is the first new rights package purchased by the new NBC Sports/Comcast venture.  Of course, it would be foolish to project that NBC/Comcast is a legit competitor for ESPN based on only an MLS deal.  But, what if this MLS rights package is followed by an 8-game NFL package?  Could the new MLS deal be just the first shot across the bow by NBC/Comcast against ESPN?  If MLS gets a foothold on NBC, does the league move away from ESPN entirely?  Many fans, and those in the blogosphere, have been yearning for a true competitor to the WWL.  Maybe, just maybe, the seemingly inconsequential MLS could be the tipping point when we look back years from now. You may say I’m a dreamer…