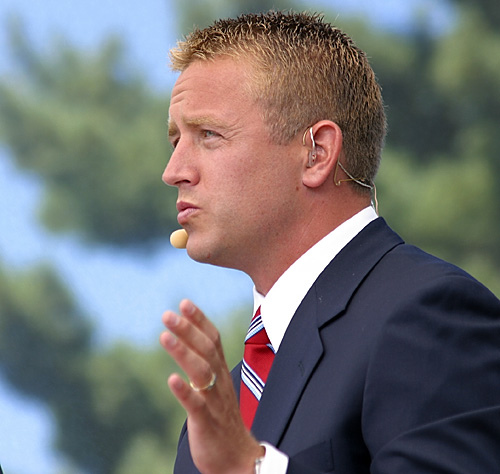 Analysts are supposed to be unbiased in their work – it’s perhaps the one aspect of announcing that draws the most skepticism, controversy, and outrage from fans.  “Announcer X is biased against my team or my league!”  “I don’t like Announcer Y because he hates our team!”  Things get complicated when a former player from a given team or university enters into the sports media and has to answer to charges of bias.  Usually, criticism comes from fans of rival schools, teams, or conferences.  But, I can’t ever remember an analyst actually leaving his hometown based on criticism from his own fans.  That’s exactly what has happened with Kirk Herbstreit.

ESPN’s top college analyst has reportedly come under so much fire from rabid Buckeye fans that he actually moved his family to Nashville from Columbus.  Here’s some Herbie quotes from Bob Hunter’s article in the Columbus Dispatch…

“Nobody loves Ohio State more than me,” said Herbstreit, a former Buckeyes quarterback. “I still have a picture of Woody Hayes and my dad (Jim, a former OSU player) in my office, and nobody will do more than I do for the university behind the scenes. But I’ve got a job to do, and I’m going to continue to be fair and objective. To continue to have to defend myself and my family in regards to my love and devotion to Ohio State is unfair.”

“From a sports perspective, this is rough,” he said. “I love Ohio State. Love the Blue Jackets. Love the Reds. Those are my hobbies. I don’t like moving. I love living here. I don’t want to leave. But I just can’t do this anymore. I really can’t keep going like this.

“Eighty to ninety percent of the Ohio State fans are great. It’s the vocal minority that make it rough. They probably represent only 5 to 10 percent of the fan base, but they are relentless.”

As someone who lives in Columbus, let me tell you that this would be a huge local story… if it wasn’t for that little controversy going on with Ohio State’s head coach.  As a C-Bus resident, I can say that the perspective on Herbie is mixed.  Certainly, there are many that love him as a former Buckeye and TV personality.  Then, there is indeed that 5 to 10 percent of fans that are absolute nutcases and probably think the NFL labor dispute is a grand conspiracy against the Buckeyes.  However, there are also many levelheaded Ohio State fans that see Herbstreit as often going too far in the direction of objectivity towards an anti-OSU bias.  Therefore, I don’t think this story is as crystal clear as “insane Ohio State fans drive local hero out of town.”

First, let’s address the claims that Herbstreit has been unfairly biased against the Buckeyes.  A lot of folks outside of Columbus would think that this is a ludicrous charge from a fanbase that doesn’t exactly have the best reputation nationwide.  Point taken.  I like to think of myself as somewhat rational, so I have to bring up Herbstreit’s final AP ballot from this year as evidence that actually favors this point of view.  Herbie dropped the Buckeyes three spots from 6th to 9th in his final ballot after winning the Sugar Bowl.  OSU finished 5th in the AP poll.  At 12-1, Herbstreit placed Ohio State behind 4 teams that had two or more losses.  Now, even as an impartial observer to this whole situation, doesn’t that seem questionable?

Then, there is Herbstreit’s bizarre feud with current Ohio State QB Terrelle Pryor that has been ongoing for over a year.  He has consistently been one of the harshest critics of Pryor even as far back as 2009.  Notably, Pryor fired back last season with his “Fake Buckeye” tweet towards Herbstreit after more criticism.  After the tattoo saga broke, Herbstreit did this interview with Colin Cowherd that blasted Pryor on a personal level.  (I despise linking to Bleacher Report, especially in light of their hideous Japan Earthquake Slideshow, but sadly it’s the only place I can find what appears to be a transcript of the interview.)

To be fair, is much of Herbstreit’s criticism on Pryor accurate?  Heck yeah.  Has Pryor brought shame to Ohio State through some of his embarrassing quotes, actions on the sidelines, and the mess that the Buckeyes are involved in currently?  Absolutely.  However, is much of Herbstreit’s commentary unnecessary personal attacks against Pryor?  Yes.  Is TP’s 31-4 record as a starter with two BCS Bowl victories and an undefeated record against Michigan largely forgotten?  You bet.  There are fans that are legitimately on both sides of the Herbstreit-Pryor dispute.

I bring these items to the table to say that there is plenty of room for legitimate questioning of whether Kirk Herbstreit has been biased against Ohio State, and Terrelle Pryor especially, in his analysis.  Does that mean he hates Ohio State?  Of course not.  Nobody in or out of Columbus can question Herbie’s love for his alma mater.  Yet, I believe it is fair to say that in his pursuit of being objective at ESPN, he has gone over the top at times.

As far as the other side of the coin goes, that is no defense for any extreme action or actions by fans that has caused a man to uproot his family from his hometown.  At this point, nobody outside of the Herbstreit family probably knows what happened that caused this move from Columbus to Nashville.  It speaks poorly to Ohio State fans, and fans in general, that there would be elements of extremism that causes someone to leave a place they love.  Frankly, it’s embarrassing as a resident of Columbus to see a face of THE Ohio State University leave town because of what appears to be our own people.  At the same time though, Herbstreit should be able to face fair questions about his work at ESPN.

So, perhaps there is a lesson in this Herbstreit saga.  Like what we saw at Toomer’s Corner, it speaks to the unsettling rise in extreme passion in college football.  It tells us that objectivity in sports media is still one of the top priorities for broadcasters and fans alike.  It tells us that it’s one thing for fans to have legitimate questions and criticisms of announcers and another to obsessively and ferociously attack those announcers.  Herbstreit should continue to try to be objective in his analysis and respectable fans should continue to hold him accountable on either side, within reason.  Hopefully the lesson is that we shouldn’t have to see this kind of story again in the near future.