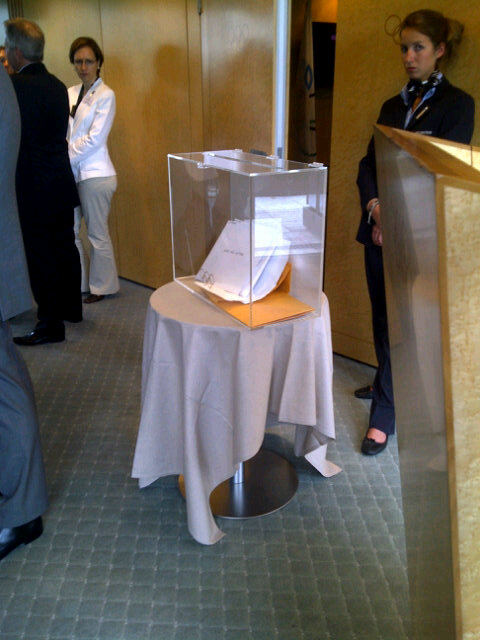 I can’t even imagine what election night was like before television. We all remember the famous picture of the newspaper headline that Dewey defeated Truman. Later ESPN and CNN would later change sports as we know it as those channels enabled you to see highlights of all the games rather than just your local teams on the late night news.

The past 48 hours I have to say that I was riveted by all the coverage of the Olympic bidding process that unfolded in Switzerland and largely that was because of social media and folks like John Ourand, Patrick Sandusky, Tripp Mickle, and Richard Deitsch who did fabulous jobs covering the action on Twitter and the web.

When the smoke cleared, Comcast/NBC/Versus came out on top bidding around $4.4 billion for the 2014, 2016, 2018, and 2020 Olympics. NBC minority owner, GE,  also sweetened the pot with $200 million sponsorship of the Olympics as well. As I highlighted yesterday, absolutely nobody knew how things would unfold. Bodog even had NBC as the underdog to retain the rights and many believed Fox had the inside track. In fact, it wasn’t even clear just how many Olympics would be auctioned off in this process as only recently did rumblings surface that the 2018 and 2020 Olympics might be bundled in with the 2014 and 2016 Olympics.

As a huge fan of the Olympics (more of a winter guy myself) as well as a guy keenly interested in sports media and in particular sports media rights, this was the mecca of all auctions. The fact that the IOC has this cattle call and defined process makes it that more interesting. You rarely get the most powerful dozen folks at a major media company in the same room together. The Olympic bidding process not only accomplishes that but also gets the biggest media moguls from multiple companies in one place, nervous as hell, and ready to pitch as best they can. The fact that NBC’s Dick Ebersol resigned 3 weeks ago increased the intrigue as to what would unfold.

At stake is not just the Olympics, but the future trajectory for their various properties. If Fox would have won (phew!), it’s very possible FX would emerge as a more sports focused channel and one that demands higher carriage fees. A successful ESPN bid would have been a watershed moment for the company but one that may have imposed financial and programming constraints that actually could have had detrimental effects down the road.

Per SI here is the breakdown of the bids:

The two things that stick out is that despite talking up “showing financial constraint”, Comcast/NBC came in strong with the money. Too strong actually as they bested Fox by $800 million. Perhaps the talk of financial constraint and Ebersol leaving was a bit of smokescreen so other bidders would soften up their bids sensing weakness from the incumbent. The other thing that is a bit of a surprise is that the 2018 and 2020 Olympics that NBC have acquired the rights for don’t even have host cities yet. Tripp Mickle pointed out that this was the first time billion dollar bidding took place for a TBD Olympics. That’s very odd considering knowing the timezone is a key component into knowing how monetizeable live programming will be.

In the end I had NBC and ESPN on close to equal footing as my preference to win the bidding. NBC has said they’ll go with a lot more live programming and have even committed to broadcasting all of the US Olympic trials as well. With Versus in the fold, NBC has a lot more flexibility to cover the games and I think we’ll see that in the upcoming 2012 Olympics.

I have to admit that I had problems sleeping the last two days in anticipation of the bidding which took place during sleeping hours on the west coast. As a business guy the influx of info and transparency about the process really kept me locked into everything. I was planning on showing some tweets and twitpics from the main guys covering this but after screenshoting and tracking down all of this good stuff, I realized it’s just way too much stuff to upload and attribute.

Here are some highlights that were particularly interesting or fun that I’ve compiled. Honestly these guys killed it so this is only a small sampling…

Below are some cool pics as well. From Tripp Mick’s twitpic account.

Fox and ESPN greeting each other in the hall. 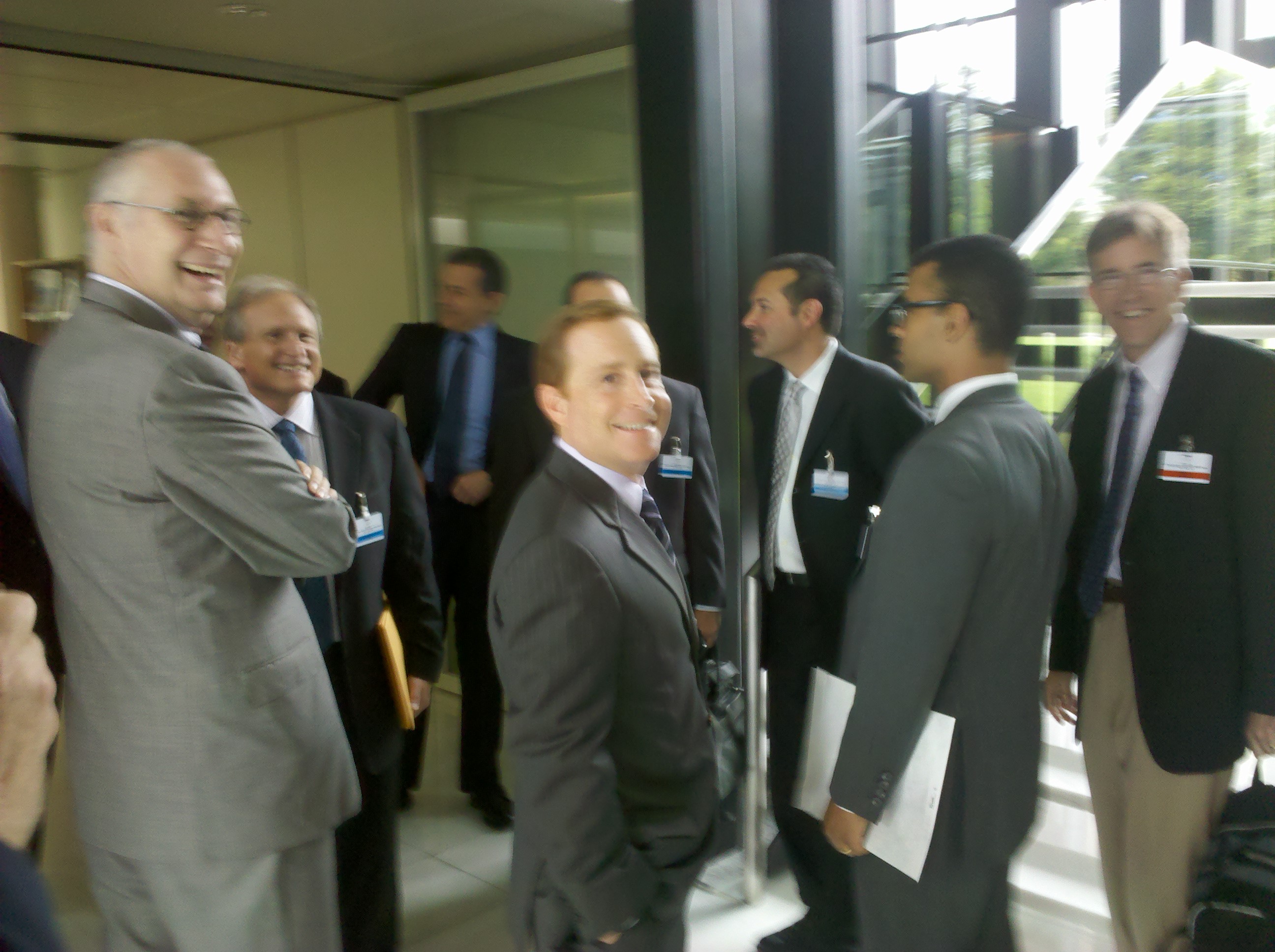 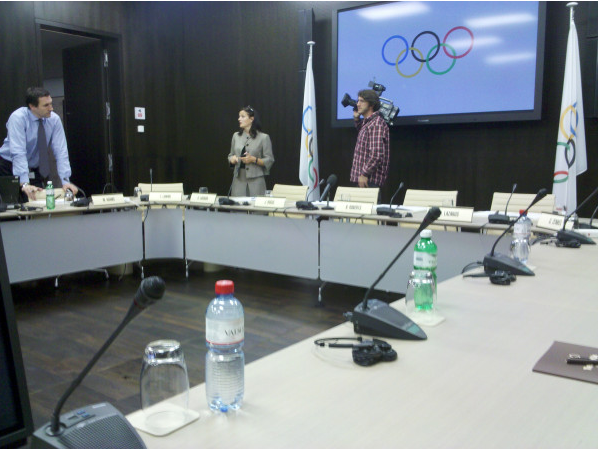 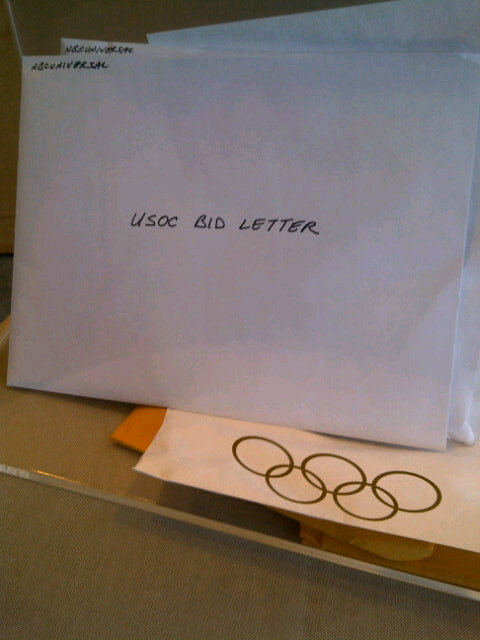