Ratings are once again down for the MLB playoffs. There are many ways to spin the various stats or attribute them to specific variables like weather, scheduling, and match ups, but the fact is that it’s a gloomy start of October on the ratings front.

“The audience has dropped significantly over the first four days of the 2011 postseason for Turner Sports. Through 10 telecasts on TBS and TNT, ratings declined 28% to a 2.1 from a 2.8 average in 2010, while viewership decreased 25% to 3.32 million from 4.45 million, according to Nielsen.”

Monday night’s head to head showdown between ESPN’s MNF and TBS’s Yankees and Tigers game three served as a telling exhibit of ESPN’s gravitational pull away from other competitive programming. Per TV By The Numbers, MNF squashed the playoff game by a comfortable 2-1 margin in the 18-49 demographic.

Let’s think about this for just a second. A pivotal playoff game featuring two great television markets and star pitchers that was close throughout up against one of the worst Monday night draws this season. Furthermore, the MNF game featured a winless team, two modest sized television markets, and very little national appeal.  It won out by a huge margin.

There are many ways to frame the television matchup. Football vs. baseball, fantasy sports and gambling vs. playoff drama, and of course TBS vs ESPN.

For the sake of discussion, let’s say you flip the games and MNF for that one night is on TBS and Tigers/Yankees is on ESPN, how would those ratings be affected?

I’ll venture a guess that MNF is somewhere near a four rating and Game 3 potentially moves up to a three rating. Maybe that is overstated, but for the last week or so it’s been eye opening how viewers migrate to ESPN by habit. Below is a recap of examples of this type of gravitational pull…

– I was at a local sandwich shop on Thursday, a customer requests that they turn on the two televisions to watch the first game of the playoffs. Employees are known baseball fans yet between the interested customer and three employees, they give up looking for the channel after ESPN, ESPN2, and Fox are turned on with no baseball found. Television settles on Around The Horn or PTI before I speak up that it might be on TBS.

– At a winery on Saturday night for an outdoor wedding, I learn of a building 200 yards away with cell phone reception (which I am itching for) to check email and the scores of all the big college football games. To my surprise there is a small wine bar for other visitors which has a small television tuned to of all games Purdue vs. Notre Dame.  This bypassed not only the MLB Playoffs, but Florida vs Alabama and Wisconsin vs. Nebraska. It’s half time and I ask for the Wisconsin vs. Nebraska game, which is also at half time. After three minutes of highlights, another patron then comes in and asks to see the MLB playoff game as I am just watching highlights. Again they’re unable to navigate to TBS and give up.

– Last night I go to pick up a pizza at halftime of MNF. The pizzeria has about 25 customers, 5 employees, and 4 televisions. All of them are watching MNF although a pair of them are right next to each other and could be split to also have the MLB playoff game.

– Sadly, I then endure 15 minutes of NFL Live yesterday before I realize there is an early divisional game on TBS (thanks Twitter).

Now if you’re an NHL or even an NFL fan, I think it’s a safe bet you’re not mistakenly on ESPN unaware of a game on another channel. But things get murkier for other sports.

College football and basketball, MLB, and the NBA are all properties that are regularly on ESPN but shared with other networks. Any social sports fan has numerous encounters like mine above where the more unsavvy sports fan has struggled or given up in getting to a particular game. Readers of this site are naturally more savvy but for the casual sports fan, the gravitational pull to ESPN is certainly a factor. 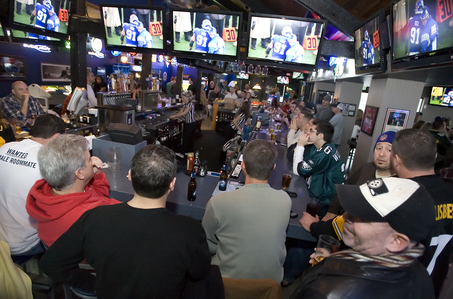 If it’s not your team and you just want to watch something (maybe at dinner, while you work, when you have people over, at the pub), for many people, flipping to ESPN is mechanical habit and routine. Nine times out of ten, that’s probably the best sports viewing option.

But sometimes it’s not and there is a very significant portion of the audience who get situated with ESPN programming without knowing better. Therein lies one of the biggest problems in sports media.

MLB is losing audience numbers just because it’s not on ESPN. TBS, TNT, Versus, FX, and any non broadcast channel will almost automatically leak audience for any sports programming they remove from the grasp of ESPN. Until the habit of situating on ESPN is broken, ESPN has a distinct competitive advantage of pulling in additional viewers who are asleep at the wheel, or at the very least too uniformed or lazy to search for additional programming options.

This is the main appeal of the promise of Versus/NBC Sports Network materializing into a true ESPN competitor, although it will likely take a full decade. If the channel was able to add a bevy of new programming (and hopefully relocate to a channel number within range of ESPN on programming guides), over time people would begin to at least venture over to a second channel before putting the remote down and moving on.

At that point, ESPN would have less leverage and leagues would be more adapt to shopping their television deals around a bit more without the fear of leaking audience by leaving ESPN. Currently, finding what you want 90% of the time on ESPN allows people to fall into the habit. Over time, NBC Sports Network and others may break off a significant piece of sports programming that reprograms viewers to be more attentive in looking for viewing options.

Until that behavorial pattern is broken, the sports world is in a place where the scales are always tilted in ESPN’s favor with channels and leagues not aligned with the leader fighting an uphill battle for viewers, promotion, and relevance.