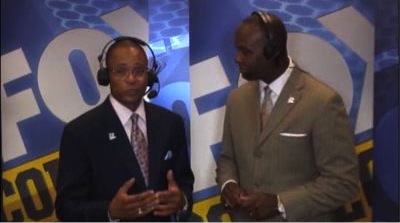 Being an expert in the services industry (or having watched some television about it), I’ve come to learn about the “soft launch.” Hotels, bars, restaurants, and other highly trafficked places have an unveiling for friends and family members to get familiar with the demands and operations before doing it for real at a larger scale.

For the past several weeks, Gus Johnson and FX have essentially soft launched with a trifecta of nationally insignificant games. Many reading this may have not even realized that Johnson had debuted and it’s hard to blame them given the not so potent lineup of Oklahoma vs. Tulsa, Oregon vs. Nevada, and USC vs. Syracuse. The average margin of victory through three games on FX has been over 33 points.

Meanwhile the juggernaut of ESPN, ABC, ESPN2, and ESPNU has flexed their dominance with some great games and anticipated matchups. To their credit, The Worldwide Leader does a damn good job. The likes of Mark May and Craig James can be repugnant, but with the plethora of big games, conference rights, and a cupboard full of talented folks, it equates to some of ESPN’s best work being rooted in covering and promoting college football.

Competition has been sparse. The Big Ten Network, Versus, CBS, and NBC all have varying levels of a foothold, but no single major sport is more dominated in terms of coverage as ESPN and college football. Versus and NBC have a good thing going with the NHL, but most fans consume those broadcasts at a local level and hockey still lacks a true broad appeal to casual sports fans…

This is Fox’s second foray into college football, having bombed with the BCS games from 2007-2010 – a very public failing in which fans universally panned the production and announcing of the games and ratings were generally poor comparative to ESPN numbers both before and after.

Oddly, Fox and FX’s reemergence here wouldn’t have been possible without ESPN as the two often foes teamed up to keep Comcast/NBC/Versus from scoring a landmark deal with the Pac 12. Instead you have a split of broadcasting rights between the two media companies that also extends to college basketball. Fox not only has the Pac 12 conference championship game but also the Big Ten Championship game so there is actual meat on the bone here. The extra programming led Fox to move games away from their regional sports channels to FX, which brings us to tomorrow’s Missouri vs. Oklahoma game on FX.

6 months ago, sports fans had no idea Gus Johnson was winding down a magical stretch at CBS. Television talent contract details and negotiations are rarely public and within months of another enjoyable tournament performance, Johnson decided to move to Fox. Many were baffled by the move, but the truth is the writing was on the wall. His upward mobility at CBS was severely impeded by a bevy of entrenched individuals.

The general assumption was that Johnson would be the focal point of the college basketball coverage (where he’ll continue his role at the Big Ten Network) and would bolster an extremely poor stable of NFL broadcast talent. Surprisingly those smart network types opted to put Johnson in an unfamiliar role, leading their college football coverage.

Johnson will still do some NFL but rather than focusing on second tier NFC games in local markets, Johnson will be drawing some good national assignments like tomorrow’s matchup. ESPN, ABC, and ESPN2 will certainly always have bigger firework shows scheduled, but going forward Johnson and FX may be making overtures to the diehards looking for the jaw dropping good finishes that we’re accustomed to on a weekly basis.

Most readers here are well aware of many of the classic Gus calls spanning multiple crazy tournament games and unexpected finishes in the NFL. Given the natural emotion and drama of big time college football, you’d think there could be some potential for Johnson and FX to assert themselves as a noteworthy destination for fans similar to Musberger and Herbie and the general draw of ESPN’s Saturday programming spanning from Gameday to College Gameday Final.

The early reaction during the “soft launch” was very encouraging. Bloguin’s own Allen Kenney had this to say about Johnson’s inaugural performance calling a Sooner blowout win:

“If FX can keep up what I saw this weekend, I think we will be looking at the new gold standard for college football broadcasts.”

That sentiment has been echoed many times over as Johnson even made his own headlines.

At this point I’m probably overselling what Vegas has as a 20 point Oklahoma beat-down, but that’s the beauty of college football as seemingly anything is possible. In fact, this could be Missouri’s second year in a row knocking off a number one Oklahoma. The stars could align for Fox to produce an instant classic to the backdrop of conference realignment pandemonium while the ESPN and ABC games spiral into laughers. At the same time, it’s also likely this game could be over in the third quarter and the flow of viewers could funnel to The Worldwide Leader.

All that said, college football fans have a new voice and a new channel with instant classic potential and that alone is exciting and good for the sport.