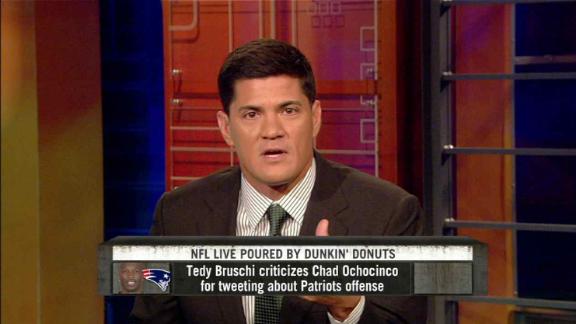 It appears ESPN’s/Bruschi’s attempt at creating a contrived controversy was indeed as baseless as we all assumed. This morning Tom Brady spoke to WEEI in Boston and had this to say about the Ocho/Bruschi brouhaha…

“None of those guys have any clue what they’re talking about,” Tom Brady said Monday morning on WEEI when asked about criticism of Ochocinco from ex-Patriots like Tedy Bruschi and Rodney Harrison. “They aren’t in this locker room.”

Matt wrote about this “story” when it first broke, and you can read it here. I pretty much completely agree with everything that was said there as it’s been nearly a week and I still can’t fathom how anything Ocho said was worth getting worked up about. I mean, Brady threw for 500+ yards, that’s absurd. If Ochocinco wants to use his 140 characters and half a minute to complement his teammate on such an otherworldly performance, then that seems like a completely normal human response.

This entire… whatever it is, just reeks of ESPN creating the story rather than reporting it. One of my 5,000 complaints with ESPN deals with the fact that almost all of their on air talent is recently retired athletes that have no schooling or professional experience. Their “experience” almost exclusively was them spouting off nonabrasive cliches in interviews, and for the most part we get players who openly cheerlead for whomever recently employed them, speaking in cliches as athletes instead of as reporters. They really are not completely separated from the game and they still insert themselves in it when they feel the need to.

I was kind of looking forward to finding Bruschi’s Twitter account and taking some innocuous tweet and getting completely riled up about it until I found his account. Yes, Tedy has an account, but is yet to tweet, and best of all his name is @Brufasa with a picture of Mufasa as his avatar. I can’t hate on that, no way.

The only thing of substance I’m taking from this is hopefully the emergence of the phrase “video game numbers” when describing an absolutely insane performance. For those that aren’t nerds, and might be confused by such a phrase, it basically means achieving something that is drastically above what real life athletes are perceived to be able to accomplish. An example of this is I remember playing NCAA Football back in the day and my running back had a 40/4,000 year (40 TD’s, 4,000 yards rushing). Right now, real life Tom Brady is on pace to have a 7,500 yard passing season, breaking the previous record by nearly 2,500 yards. Sure, he’ll probably not throw for 7K+ yards in a season, but I’m sure someone somewhere in some damp dark basement has achieved such a goal before.

Ochocinco showed he had a pulse yesterday and caught a couple of passes for 45 yards. This was likely enough to halt any prolonged annoyance that we might have endured if he continued to put up goose eggs for his stats.

View all posts by Brady Green