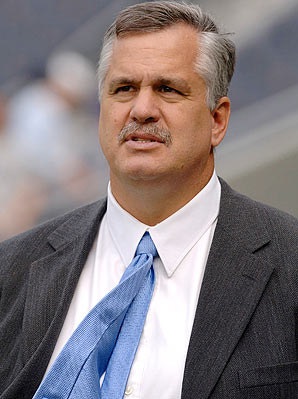 It’s truly a black day at Awful Announcing folks.  As SI.com’s Richard Deitsch reports (catch his AA Q&A here and here) Matt Millen and Joe Theismann will be removed from the NFL Network’s broadcast booth and replaced by Mike Mayock.  This news brings about a mixed bag of joy, fear, and maybe a little indigestion.  On one hand, fans of even borderline tolerable announcing should be ecstatic to finally have these two blockheads removed from game telecasts. No matter your opinion of Mike Mayock (personally, I feel he’s overrated as a game analyst, but is superb in the studio), he can’t have smaller shoes to fill than those left by Theismann and Millen — perhaps the worst analyst pair in the history of sports on television. Unfortunately, that is more fact than exaggeration. Remember their bizarre canonization of Randy Moss last season?  Or this Pro Football Weekly article highlighting some of their “finer moments”?

Time will tell if the No. 1 and No. 3 worst announcers, as voted by our AA readership, will inflict as large a path of announcing destruction without combining their forces in the NFLN booth.  But, while our ears will undoubtedly bleed less next fall, this rumored change at NFLN does mark a day of mourning for us here at AA. Just think of all the potential soundbytes, YouTube clips, and articles that are now lost without Millen and Theismann announcing together. No more Real Tweets from Real People, with such gems from the Twitterverse like the following:

RumfordJohnny If you harnessed the mental energy of Theismann and Millen, you could toast some bread…lightly.

christiankwest Part of my brain oozed out of my ears after listening to that last Millen-Theismann exchange.#mutebutton

Heck, I was even considering pitching the idea to rename the Pammies the Theismanns, or the Millens…or the Millimanns.  But, at least Theismann and Millen will still be on the air plenty during football season on NFLN and ESPN, respectively, to make us laugh and cry simultaneously.

By the way, Deitsch also mentions another ray of hope for the AA fan base and the NFLN broadcast booth.  The possibility that NFLN may reach out to Mr. Gus Johnson to fulfill the play-by-play duties starting next fall.  HA HA!  Even if it’s only a rumor, we can still dream.