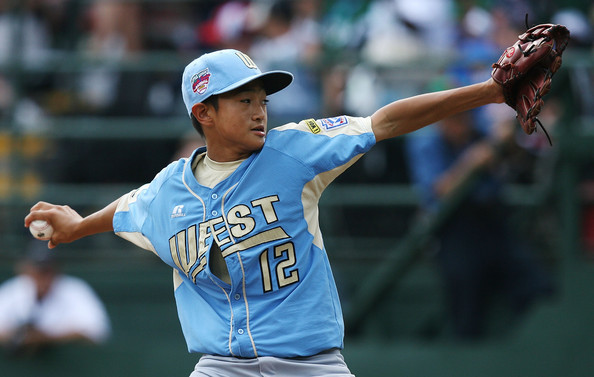 The month of August is one of the worst, if not the single most brutal month on the sports television calendar.  The baseball season is finally winding down the dog days of summer, college and pro football haven’t kicked off yet (no, I’m not counting preseason), and other sports like golf and soccer aren’t in their peak months.  And yet, every year like a rite of late summer, what does ESPN force down our throats… the Little League World Series.

Yes, every August, ESPN has committed to broadcasting the Little League World Series like it was the most important sporting event in the world, at least in the category of pre-teens grabbing at their junk on national television.  In years past, the omnipresence of the LLWS has been extremely annoying for the silent majority of sports fans.  However, ESPN decided to take their devotion to the LLWS to new heights this year, televising not only all 32 games of the LLWS in Williamsport across the family of networks, but also branching out into regional coverage this August to the tune of an additional 22 games, that’s over 50 IN TOTAL!

You practically haven’t been able to turn on ESPN without seeing children playing baseball this month. Of course, ESPN’s commitment to stay with a Regional LLWS game over a USA/Mexico friendly caught the ire of many sports fans earlier this month when soccer fans were forced to miss the beginning of Jurgen Klinnsmen’s debut and the first goal of the match.  But now, amid mounting criticism of ESPN’s saturation of coverage, and possible exploitation of the kids playing the game, the WWL’s attack dog has sprung to their defense… ESPN’s supposedly independent Ombudsman, The Poynter Institute…

Readers who remember the #FreeBruce fiasco will recall the pathetic take by the Poynter Institute in the aftermath of the controversy.  In fact, Ben stated here last month that we as sports fans had lost the Poynter Institute as a reliable Ombudsman with their hatchet job on anyone daring to criticize ESPN’s handling of the Bruce Feldman saga (you’ll remember Poynter basically blamed the sports blogosphere for turning a “time-out,” which it wasn’t, into a crisis of journalistic integrity, which it was).  Still though, I was willing to give Poynter a chance, after all they came highly recommended as influential voices for journalism.  But, their latest fluff piece on the LLWS is hopefully the final straw for them to be taken seriously as ESPN Ombudsman.

Once again, Poynter’s latest piece seems like it should have come from the ESPN PR Department instead of the Ombudsman.  Here’s a few of the most ridiculous quotes:

“ESPN has already attracted its share of disapproving columnists and critics, who argue that a children’s event (these players are all between the ages of 11-13) should not be on national TV. Most of the critics question why we need to see the boys cry.

We say why not? What’s so shameful about little boys crying?”

“Turning a bright spotlight on children, detractors argue, is over the top…  Others go further, accusing ESPN of exploiting children.”

“So look at the boys who cry. But you’d better watch close…  A camera shot might catch a few tears, but it won’t linger.”

“That’s a noble approach, if maybe a bit misguided. By turning away from the tears, ESPN misses an opportunity to take its coverage of the Little League World Series to the next level.”

“Instead of minimizing the intense emotions, we suggest having the resources on hand to explore these difficult moments.

Absorb the lunacy of some of these comments by ESPN’s guard dog at Poynter.  It’s not exploitative for ESPN to film these children crying…  In fact, ESPN is soooo noble by only holding their cameras on these poor kids for such a small time.  The next time some kid is bawling his eyes out over his dreams being crushed, ESPN should zoom in and hold for FIVE MINUTES!  In fact, ESPN is only misguided because they aren’t exploiting these poor kids enough.  Hell, maybe ESPN should start showing EVERY GAME of EVERY LITTLE LEAGUE AROUND THE COUNTRY BECAUSE WE JUST CAN’T GET ENOUGH OF THESE KIDS BAWLING AFTER THEY LOSE!  THEN, ESPN CAN HAVE DR. DREW ON FOR A NIGHTLY RECAP OF THESE KIDS’ ABILITY TO HANDLE THEIR DAMN EMOTIONS!  Honestly, I think there’s a typo in Poynter’s article, it should read:

“Instead of minimizing the intense emotions, we suggest having the resources on hand to explore REALLY EXPLOIT these difficult moments.”

Here’s a reality check for Poynter.  The majority of sports fans aren’t upset with issues of exploitation of children in the LLWS.  Sports fans also don’t want psychological breakdowns of the interaction between Little League coaches and their kids.  The suggestion by Poynter to take the LLWS further away from a sporting event and turn it into some type of After School Special may be the dumbest thing I’ve ever read on the internet, and that includes Bleacher Report’s “Worst Natural Disasters In Sports!”  Sports fans don’t have a problem with how the LLWS is covered by ESPN, we just want less coverage!  I have nothing against kids playing baseball, or televising the last few games of the LLWS, but the wall to wall obsession is overkill.  Once again though, Poynter completely misses the mark and fails to connect with dissatisfaction of many ESPN viewers.

In the end, Poynter has been a major disappointment in their term as Ombudsman, plain and simple.  Maybe I’m wrong and there is still time for them to turn their act around though.  Maybe that expose on Craig James actually is coming (we’re still waiting by the way).  Maybe the conflict of interest between ESPN’s college football coverage and the Longhorn Network will be seriously examined.  Maybe Poynter will actually start doing the job they were assigned to do in providing a check to ESPN’s ever eroding journalistic standards.  Or maybe Poynter will continue to sit on the sidelines, waving their pom-poms cheering on ESPN’s every decision and defending THE BRAND against all criticism.

Until then, it’s up to the blogosphere to do their best to keep ESPN in check.  The responsibility falls on writers like Tommy Craggs at Deadspin and Tim Burke at SportsGrid and the staff here at Awful Announcing to provide the critique that isn’t coming from ESPN’s Ombudsman.  It may be wishful thinking that ESPN and the “Ombudsman” will start changing their ways, but until then, at least there are people willing to take a stand.