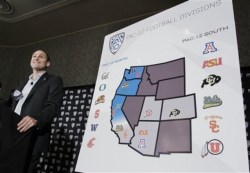 The Pac 12 Networks announcement is absolutely huge. There are some obvious takeaways, but if you really dive deep into the implications this will have on the sports media world, the signifigance of the development begins to blow your mind. Many things will change in media and in college football because of this.

If you missed the announcement, the Pac 12 is launching a national network similar to the Big Ten Network. Here is where it gets interesting though. The Pac 12 will also launch 6 regional networks as well.  From College Football Talk:

The four cable operators will broadcast a total of 850 sporting events — 350 events nationally and 500 events regionally — including every football game and every men’s basketball game that isn’t carried by the Pac-12′s other media rights conglomerates, ESPN and FOX.

The six regional networks are Washington, Oregon, Northern California, Southern California, Arizona and Mountain. This means that fans from all 12 Pac-12 institutions will have an opportunity to watch every football and men’s basketball game of their school provided they have the network. The six regional networks will also broadcast other Olympic (i.e. non-revenue generating) sports and academic programming.”

Some further details from the LA Times:

“There are no plans in place with distributors such as DirectTV or Dish Network, though Scott said he hoped to eventually add satellite and telephone companies to the deal.

The four distributors who are onboard with the conference can reach about 48 million viewers.”

The complicated nature and structure of this new initiative is a bit confusing so here are the bullet points:

– The National Network will have 350 events a year. That’s pretty legit. I’ll dive into that number in just a bit.

– 500 events regionally is BETWEEN the 6 regional channels so you’d imagine that each individial network would have 75-95 events that weren’t on the national network (500/6 is 83.3 so that would be the average if each regional had the same amount of unique broadcasts).

– The national network would likely be on basic cable packages in the Pac 12 geographic blue print, the regional networks will be local on expanded cable, and for those not in the Pac 12 region they would be available (if your provider adds them) in sports tiers.

– John Ourand tweeted that Dish Network is unlikely and DirectTV were possible options. No word on Fios or Uverse.

– The network wants to utilize mobile and On Demand viewing.

– The network is wholly owned by the conference unlike the Big Ten Network and Longhorn Network. A lot of people are scratching their head here as usually equity in the channel is given to distributors or media partners. How the network got their distribution agreements and maintained 100% ownership is extremely curious.

Now whenever these new networks get announced I think the biggest question is “What’s actually going to be on the channel?”

350 national events that Fox, FX, and ESPN don’t already have rights for. They’ll take every football game they can get, which my guess will be is 2-3 games in non conference play and maybe only 1-2 games in conference play. In total my best guess is that you’ll see 25 football games on the network. They’ll broadcast a lot of college basketball and probably a good deal of women’s college basketball. Best guess is 6 men’s games a week before conference play begins and maybe 2-3 during conference play. In total maybe 60-80 games. Throw in maybe 30-40 women’s games and those three sports would account for maybe ~130 games. My best guess is that baseball and softball will be a big chunk of the remaining 220 games and maybe a coulple dozen broadcasts for the other sports.

Update: Reader@Timswartz points out that The Pac 12 held back a good amount of games from Fox and ESPN and that they’ll carry 3 football games a week. I had the total number pegged at 25 and it looks like it will be closer to 40. Given the west coast has a small window to play games with the time zone, it will be interesting to se how they cram the games in on a Saturday.

Overerall there is a good amount of meat on the Pac 12 network.

The regionals though are going to be flimsy. They’ll borrow programming from the national network and have some shoulder programming and preview/highlight shows. Apparently there will be acadmic content too (YAY!). The 75-95 events these channels will offer will be all over the place. You’re getting what falls through the cracks of ESPN, Fox, FX, AND the Pac 12 network and the programming is only for two local schools. The key is that the Pac 12 ran the numbers and saw that maybe 10-20 of these broacasts will be meaningful games to fans and the rest is just exposure for lesser sports. It’s enough to warrant local distribution and who knows, maybe they’ll get a couple pennies a month from cable providers for being on the sports tier. I really don’t feel the need to get the Arizona/Arizona State channel but I bet twice a year I’ll say to myself, “sucks I don’t have that channel”.

The fact the channels already have major distribution agreements is amazing. Channels like the Big Ten Network and NFL Network were on for months and years before getting traction and both are still locked out of some households. The Pac 12 Network will blanket the West Coast and it’s baffling that they reached these deals a full year in advance AND retained 100% ownership of the channel.

Comcast almost won the television rights to the conference’s best football and basketball programming (for NBC and Versus) but was nipped at the line by an innovative partnership between Fox and ESPN. Months later they bury the hatchet and just bend over to carry the conference that spurned their very own entity a FULL YEAR BEFORE THE LAUNCH???

It’s very odd, and baffled Ourand who knows this stuff better than anyone.

From a college sports standpoint this is like the strike to the pinata that ripped it open leading to a feeding frenzy. Big Ten Network, MWC’s channel, and The Longhorn Network all played a role but this is the event that will reshape college sports. School that join the Pac 12 now not only get a cut of revenue from the conference channel but will also be allowed to share a channel with any date they bring to the dance. Big 12 members who feel slighted by the fact that Texas has their own network will buddy up and try to move over unless the Big 12 pulls a rabbit out of a hat.

This will likely lead to a the rest of the conference being asborbed by the SEC and Big Ten and maybe some other conferences will pick up the crumbs.

With all the deals the Pac 12 has cut, any new member is going to get paid and that’s the bottom line. History, academics, culutural fit, etc. won’t be enough to keep teams from jumping. The era of the super conferences is not that far off from the future although I’d imagine it will take some time.

Going forward it will be extremely interesting to see how the SEC and Big Ten answers and how or if the Big 12 can survive going forward.

The other major story here is the continued fragment of sports on cable. I can make the case that it’s good, but in my opinion it’s detrimental to consumers and sports fans. Pro leagues and conferences offer just enough valuable programming and broad enough niche audiences that warrant having a channel. All of those channels are progressing ever year and I don’t see that trend reversing. For instance, I could see NFL Network being the home of Hard Knocks and MLB Network airing a lot more games now that both channels are off the ground.

But these rinky dink regional channels? Ourand’s tweet about this explosion of regional sports channels is right on. I like the idea of having sports regionals. In the Bay Area we have two between the A’s, Sharks, and Warriors. Now Stanford and Cal will have another channel, but will be the bottom of the barrel. They can make money off of these channels, but if you’re one of the many who want to see a true competitor to ESPN, than this continued trend is something that is undermining that hope.

If two colleges can have a channel (Texas has their own) and now teams like the Celtics and Lakers are emulating the Yankees and the YES Network, we’re slowly being pulled to a place where every damn team and school will have a channel. Econimically it works because you’re going to be paying for all these channels. The drawback is that every one of these channels will jam low rent programming, paid programming, and reruns down your throat to fill the time.

ESPN’s appeal is that you can usually always flip over and expect something. That’s why it’s the go to channel for bars and restaurants. Highlights, live events, original programming, etc, ESPN has an audience and something somewhat relevant on every hour of the day. In fact, ESPN2 does as well.

With media folks realizing the more your scatter sports the more money you can make (FX, Tru Tv, Golf Channel, regionals, TBS, TNT, leagues, conferences, Versus), a true ESPN competitor will likely never emerge. Versus/NBC Sports (rebranding pending) or TNT/TBS has a shot, but every time the decision to start sports network #150 arises, that’s more programming that can’t help stabilize and build out an ESPN competitor. To be truly competitive, an entity like Versus is going to need to be overloaded with live events to the point that people will stay for original programming which would help increase ratings, distribution, and carriage fees.

I think consumers would much rather have a dozen sports channels with 4-5 of them being significant and the rest being niche rather than 40 teeny tiny niche channels that really offer no value other than a handful of good games a year.

Although a big day for the Pac 12, for many this is a day of uncomfortable change for all the wrong reasons as profits are winning out over consumer preference.