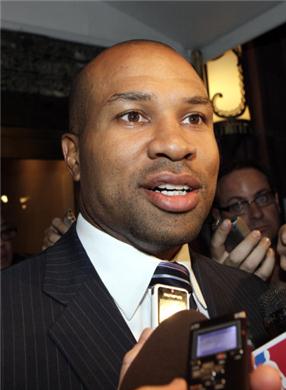 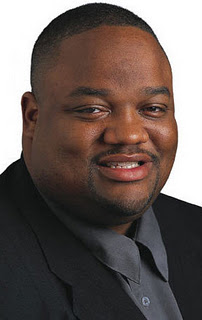 Just a week ago, there was finally a ray of hope in the dark ages that have been the NBA lockout.  Talks between both sides were happening, ticket offices were reportedly being prepared to handle sales, and optimism was high the lockout would be ended.  And then, just as we’ve grown accustomed to happening in this most maddening period in the Association’s history, negotiations broke off once again.  MORE games were cancelled, an 82 game season is now out of the picture,, and NBA fans are left to curse the decimation this lockout has done to a sport that had been peaking.

And now, as if possible, we’ve reached a dizzying new low in the lockout saga thanks to professional mudslinger Jason Whitlock of Foxsports.com.  Usually, most columns Whitlock writes aren’t worth being taken seriously.  He’s an online version of Skip Bayless, just less theatrical.  At least with Skip, we know that it’s all pretend and no human being with the thinking capacity of prehistoric man would believe the things he says.  With Whitlock, I’m not so sure.

Whitlock’s newest target is NBA players union president Derek Fisher of the LA Lakers.  The whole saga involves unnamed sources, tales of fractures in the players union, Fisher reportedly going behind the backs of his own union to make a secret deal with David Stern, not one but two letters by Fisher debunking Whitlock’s columns, and even the threat of a lawsuit from Fisher to Whitlock.  Happy days are here again, indeed.

So when the NBA season was supposed to kick off, the union president plans on possibly suing an online columnist.  Not quite the ray of hope we’re looking for.  Here’s the Reader’s Digest version of how this he-said, she-said controversy has broken down thus far…

Whitlock Column I: “This is fact: The belief that NBA Players Association president Derek Fisher has been co-opted by commissioner David Stern — and promised the commish he could deliver the union at 50-50 — caused NBPA executive director Billy Hunter and at least one member of the union’s executive committee to confront Fisher on Friday morning and make him reassess his 50-50 push, a source familiar with the negotiations told FOXSports.com Friday afternoon.”

“It has been my belief throughout this process that Fisher is the wrong person to be the president of the union. He has earned a substantial amount of money from playing in the NBA. But not enough that he can’t be influenced and baited by the NBA establishment.”

Fisher Letter To The Union I: “Usually I wouldn’t even dignify absurd media reports with a comment. But before these reports go any further, let me say on the record to each of you, my loyalty has and always will be with the players. Anyone that questions that or doubts that does not know me, my history, and what I stand for. And quite frankly, how dare anyone call that into question. The Players Association is united and any reports to the contrary are false. There have been no side agreements, no side negotiations or anything close. We are united in serving you and presenting the best options and getting everyone back to work.”

Whitlock Column II: “What you will find in the letter is a very weak attempt by Fisher, the player president, to deny my report that Hunter, the union’s executive director, and at least one member of the union’s executive committee confronted Fisher about their belief that Fisher’s push for a 50-50 basketball-related-income split with NBA ownership was part of a deal Fisher had privately cut with David Stern and/or Adam Silver to deliver the union at 50-50.”

“Let me break this down one last time for Derek Fisher: 1. Fisher needs to fall back behind Hunter and let an experienced lawyer/negotiator battle David Stern; 2. Wior (Fisher’s publicist) needs to spend her days building a relationship with the producers of “Dancing With the Stars,” so that her client’s transition from athlete to entertainer is a smooth one.”

Fisher Letter To The Union II: “The statements made in recent articles on the Fox Sports website are inexcusable. Among the many baseless accusations, to allege that I am working with the league for my personal gain is unequivocally false. The implication that I am doing anything but working in the best interests of the players is disgusting, defamatory and a flat-out lie. I have issued a letter through my attorneys demanding a retraction for the libelous and defamatory stories the site and reporter have continued to publish.”

I’ll give you a moment to say a prayer of remembrance over what was the NBA post-Jordan boom.

If these “sources” and reports were coming from a mouthpiece more credible than Whitlock, would they be considered more seriously?  Could Whitlock’s reports be accurate?  Of course.  Could they be 100% false?  Absolutely.  It’s impossible to tell from the outside looking in, especially when unnamed sources are involved and the vigor to which Fisher has tried to debunk the columns.  Maybe the source has an axe to grind with Fisher, maybe he or she is trying to save the best deal for the players.  Who knows.  All we have are the track records of Jason Whitlock and Derek Fisher on which to pre-judge this story.  (You can make your own decision there on who that favors…)

In the end, it’s nothing other than one more depressing story regarding the NBA lockout.  Instead of us posting national TV schedules, making fun of the Heat Index, and enjoying the sequel to the greatest NBA year in over a decade… we’re left with this.  The players union president potentially suing a columnist.  Regardless of the truth of Whitlock’s columns, he’s the only winner here because myself and many others are have fallen into this game of charades and given it the light of day.

And when Jason Whitlock is the only winner of the NBA lockout thus far, that should tell you just how bad it is for the sport of basketball.

That’s where we are on Day 125 of the NBA lockout.