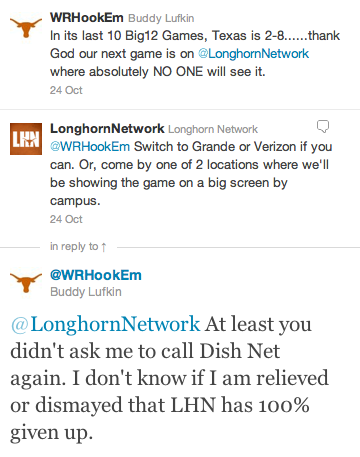 Updates at the bottom

In early September, looking to put more meat on the bone, the controversial Longhorn Network negotiated with the Big 12 10 9 10 9 10(?) to add a second football game to their programming in hopes of getting more leverage with cable operators to add the channel. In past cable channel distribution battles, a more noteworthy game often pushed operators to make last second deals in hopes of not pissing off avid sports fans. The tactic dates back to ESPN2’s broadcast of UNC vs. Duke as the channel at the time was still having issues making inroads on the distribution front.

While adding this weekend’s game against Kansas to the network was probably a shrewd move, the bottom line is that the much talked about Longhorn Network hasn’t moved the distribution needle with the game closing in. Unranked in the two major coaching polls and coming off of two straight losses, apparently a showdown with conference doormat Kansas (0-4 in conference play and having lost their last three games by an average of 36+ points) is not compelling the type of outrage and demand ESPN and The Longhorn Network hoped for.

Continued promotion on television, some sketchy espn.com love, and even the below video where Matthew McConaughey shows great range by keeping his shirt on has done nothing to expand the minuscule reach of the upstart network…

Currently the network’s main distribution comes from Verizon Fios which has approximately 4 million subscribers, the vast majority of which are outside of Texas. Grande Communications cut a deal so there is limited distribution in some areas of Texas but essentially the channel is nowhere to be found. Even the channel’s Twitter account is having a tough time pointing people to where to find the game.

Still though, there is some time left for a last second deal to be reached to appease Texas fans. Yet there seems to be very little chatter that there are good faith negotiations going on behind the scenes. Given the channel also carries nearly a dozen college basketball games before the end of the year, you would think that the window to get a deal done would essentially be this week before both parties walk away opting to re-engage closer to the start of the 2012 football season.

This was actually what happened with the Big Ten Network’s initial launch as the major players all passed on the first year (minus DirecTV) but mostly all caved in the weeks and months leading up to 2008 season. While many have assumed that Longhorn Network will ultimately outlast the blockade of cable/satellite operators who won’t carry the network, there are some stark differences that indicate this stalemate may be a long term problem.

The most glaring issue is outside of the Texas fan-base, there just isn’t a lot of interest in the channel and in fact the mere existence of the network has more than likely hurt the brand of Texas nationally more than it’s helped it.

The idea that an entire network can be propped up by two shitty football games has cable providers holding the line knowing the implications of giving in.

Also working against LHN is the fact that ESPN is their distribution partner. You’d think that this would only help adoption of the channel but my take is that ESPN has bullied the entire industry for quite awhile. This is really the only time where operators actually have leverage and can potentially keep it as an ace up their sleeve for future negotiations on other ESPN/Disney talks.

While ESPN would argue that there is some level of interest in the channel outside of Texas, the same college football die hards they tell you demand the channel wouldn’t even want LHN if it was free. The national sentiment and legacy of the channel is so tainted by controversy and the original concept is viewed as so audacious, it’s left a memorable sour taste with too many fans.

ESPN seems to have also suffered some blow-back as two of their most prominent writers in Pat Forde and Bruce Feldman have left in recent weeks. Both are the only ESPN personalities to speak out against ESPN’s involvement in the network. Forde’s comments below were actually made on ESPN while Feldman’s came after he left…

“I’m frankly a little troubled by the Longhorn Network. I know it’s been a very positive business situation I believe for our employers at ESPN, but what it does, to me, is it singles out a specific school as opposed to a collective. And when you do that, you are essentially playing favorites. … If it gets into an uneven playing field, and ESPN is part and parcel of creating an uneven playing field, then I can understand why fans of other teams would have a problem with that. It creates a perception for those of us on the dotcom side and on the news side that are covering these teams that we are going to play favorites as well.”

While it’s been tough going thus far for the Longhorn Network, the way the deal is structured (20 years $300 million), the University of Texas is making money regardless. Although we’re only two months into the launch of the network, you have to wonder if the channel has the momentum to get over the hump. Most upstart channels face similar issues, but I can’t recall a channel this reviled so early in its launch.

Longhorn’s distribution struggles are something to keep an eye on in the coming days and weeks. The network has the potential to be a big business driver similar to the BTN. But by the same token, LHN could find itself being shuttered entirely or perhaps transitioned into a more comprehensive network (similar to CNN Sports Illustrated morphing into NBA TV).

Until then, a shirt wearing McConaughey is probably not going to get the job done.

Per the Longhorn’s twitter account, the network really isn’t even talking to cable providers at this time.

“We’ve attempted to do similar deals with Time Warner Cable, DirecTV, AT&T U-Verse, Dish Network and Comcast. Unfortunately, these operators have not engaged in active negotiations in the past month.”