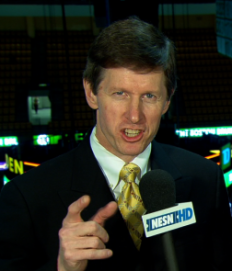 Once upon a time, Jack Edwards was your average ESPN SportsCenter anchor.  He wasn’t any different than Gary Miller or Steve Levy or Stan Verrett – just your everyday, straight-forward ESPN personality.  Unlike most other ESPN anchors though, Jack Edwards has made even more of a name for himself as a play by play man… and an insane one at that.  The last few years, Edwards has been NESN’s lead announcer for coverage of the Boston Bruins.  You could tell Jack Edwards was on his way to Crazytown when he shouted jingoistic, patriotic slogans announcing USA soccer games during the 2002 World Cup, but he’s really blossomed in Boston.  Inspired by this clip from Game 3, we’ve scoured Youtube for the best (and by best I mean most insane) Jack Edwards clips.  Here now, the Crazy Jack Edwards Top 13! (We can’t stop at ten, can we?)  Come into the padded room, it’s safe…


5) “HE WANTS TO RIP THAT GUY LIMB FROM LIMB, AND WHO WOULDN’T WANNA SEE THAT!”


4) The totally appropriate comparison to the Revolutionary War

This year's ESPYS will also emphasize "narratives of service, perseverance, and courage from within the world of sports."

This year's ESPYS will also emphasize "narratives of service, perseverance, and courage from within the world of sports."