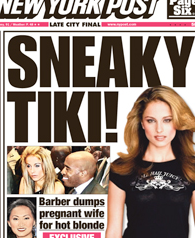 Tonight Tiki Barber was featured on HBO’s Real Sports where he discussed his motivations for making a comeback at the age of 36 after 4 years away from the game. If you missed it and have HBO, it’s worth watching especially if you enjoy foul mouth agents waxing poetically. In the piece, Barber chronicles his last 4 years as a football player, television personality, Paparazzi target, and his last year as a depressed, unemployed media personality trying to start a new life with “the other woman”. After a year of “sitting on the couch for 10 hours depressed a day”, which is what we bloggers consider “the good life,” Barber has been busting his butt in an attempt to make a comeback at the age of 36.

Given none of last year’s top 18 rushers were over 30 years of age, only three running backs in the top 50 were above 30 (Tomlinson, Thomas Jones, Ricky Williams), and only Williams is within three years of Barber’s age of that group, you could say Barber certainly has his work cut out for him. With the time off you also have to take into consideration how much he’s lost in those 1000+ days away from from the game. On the flip side his twin brother Rhonde seems to be maintaining a high level of play so there seems to be some data that the Barber twins don’t fall off a cliff athletically after 34.

While Barber’s time away from the game and his comeback are both unique stories, what’s not unique is his departure and transition from athlete to broadcaster. In fact it’s become an annual thing and was even foreshadowed all the way back in 2003 on ESPN’s Playmakers. The story goes something like this:

An aging likeable and well spoken star begins to think about life after his playing career. Maybe their agent is pushing them out the door or just whispering it might be good to look at broadcasting options if they’re available. Suddenly with no contract in place for next year and sagging interest from teams or maybe prospects of lesser playing time to finish out an existing contract, a broadcasting opportunity presents itself and then without warning that athlete’s playing career is over. Major broadcasting jobs are HARD to get and now agents are pushing their clients towards these secondary careers. In fact they’re going beyond looking for these jobs on behalf of their clients but are often grooming their clients, making them do side-work in the off-season, and networking on their behalf years in advance of any retirement.

When the offer comes, it’s decision time. In some cases players may feel like they have a few years left in the tank and probably have grandeur of going out the right way. A heroic performance, in front of your home fans, maybe even a championship. It’s an unlikely ending for any athlete but it seems like a happy ending worth chasing.

But when the money is on the table from ESPN, Fox, NBC, etc. it seems athletes are hanging them up and going the safe route. Rather than 1-3 years of grinding and a future which is to be determined, the bird in the hand of launching a lucrative secondary broadcasting career seems to be winning out.

In the case of Barber it was $2 million a year, a fraction of his NFL salary, but a nice salary to launch what was thought to be a long-term career on television.

Aaron Boone, Marshall Faulk, Keyshawn Johnson, and Normar Garciaparra are other examples of guys who had the same day headline that read something like “Yeah I am retiring AND OMG I have a job on ESPN now“. Others have had a little time in between like Michael Strahan and Mark Mulder to officially wind down before announcing their new gigs.

Although most of these retirements/hirings are usually pretty seamless, some didn’t pan out as intended. Faulk, who was doing work on the NFL network while “rehabbing” a torn ACL, was asked point blank if he was retired while on the air. Johnson, doing guest work for ESPN’s draft coverage, had even a more awkward experience in his tryout for the network.

Throughout the end of the first round and into the second round Johnson, who was still under contract with the Panthers, was campaigning for NFL teams to draft Dwayne Jarrett, the big target possession receiver from his alma mater. The Panthers ended up taking Jarrett. A week later Johnson was released and three weeks later he chose ESPN over the Titans but we’re still left with this odd video of Johnson celebrating the pick of Jarrett which ultimately served as the impetus to his departure from the NFL.

While these retirements to new career launches are now pretty common, the funny thing is that the first one I can recall is actually one of fiction where the lead character in Playmakers (aired in 2003) works to finalize a television gig even while being the team’s starting running back. He eventually loses the offer upon facing charges of a domestic incident.

It is hard to tell if these waves of athletes straight to television is good for their sports and good for television. But what I am more curious about is if any of the guys mentioned in this article regret their decision just like Barber did. Many of the personalities listed are thriving in the media world, but it’s unknown if they could have procured a similar gig down the line and what they could have accomplished on the field if they chose to continue their careers.

I am guesing most are happy they have a great job and are staying involved with the sports they love but a part of me says that there is no replacement for actually living the experience of being part of a team and trying to win a championship.  In the case of Barber, the smart decision of saving his body and investing in a long term future, seems to have led him astray although marital indiscretions and other factors certainly played a role.

Most guys don’t get the chance to undo a decision like walking away from a sport (especially football…..in a non Brett Favre like manner), so Barber’s path going forward is one that I think will be really interesting to watch.

Another unique announcing NFL storyline that warrants watching is that of Greg McElroy and his future. Drafted in the 7th round by the Jets, McElroy’s NFL prospects are going to be tough although not impossible. On the flip side, his work for ESPN during the lead up to the National Title game was universally applauded as brilliant and ESPN has already hinted that there is a job waiting for him Bristol. McElroy followed up that strong showing by getting the highest score on the Wonderlic test for a quarterback ever at the draft. Many including myself and other staff members at AA are dying for McElroy to choose announcing over football (mainly because Mark May is intolerable and Corso and Holtz are at winding down their careers and ESPN could really use him).

Could McElroy be the first athlete ever to retire before even really playing out all of his options (practice squad, UFL, CFL) and opting instead for a job in Bristol? Chris Mortensen lays out what apparently is a wide open future for McElroy.

In the end every athlete has earned the right to choose their own path regardless if we like it or not. Whether it’s Ricky Williams and weed, Barber and NBC, or McElroy and ESPN, it’s their decsion to make regardless of our preference. For some it’s the opportunity of a lifetime that warrants walking away from a storied career ahead of schedule. For others it’s a painful goodbye to the game they love in favor of security and building their brand. For many I’m sure they were likely going to retire even without a job offer so it’s a case of perfect timing. Not an easy decision by any means and I’m sure for every Barber, Boone, and Garciaparra we hear about there are guys who had an offer to retire to take a job and opted to keep playing in hopes opportunities would be there later. Just like picking a team in free agency or picking a school to attend out of high school, it seems some athletes are now being faced with one final career decision that may not be as clear cut as we assumed in light of the revelations surrounding Barber’s early retirement.