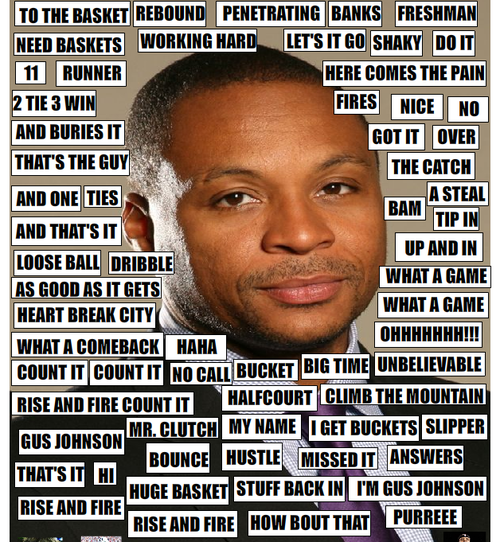 By now you’ve heard that Gus Johnson has indeed parted ways with CBS and will likely be touching down at Fox in the coming days. The bad news is that Johnson will no longer be the signature voice that captures and at times drives the riveting action of March Madness. There is no doubt that in 10 months we’ll all fully feel the void of his absence as one of the best sporting events will revert back to a more reserved style of announcing without Johnson’s unique voice. Heartbreak city.

I thought Clark Kellogg did a great job summarizing Johnson’s unique appeal when we spoke several months ago.

“His natural enthusiasm, and his uniqueness on how he combines his excitement and passion with terrific calls. I’ve heard this from countless people around the country as they love him doing NCAA games.

I think he’s a tremendous fan, play by play guy, and that his rhythm is hand in glove the style for basketball. He has a nice understanding for pace, flow, his excitement rises as the game goes from possession to possession. He just has a really intuitive sense for calling basketball that appeals to fans and makes him a lot of fun to work with.”

CBS has said goodbye to Johnson leaving a lot of people scratching their head, but really you could have seen this coming for ages. I actually thought about writing about Johnson’s imperfect relationship with CBS and how it would effect his career going forward many times over but could never nail down exactly when his contract expired with CBS. I asked around and nobody knew, hence it was hard to gauge when we could see some type of decision/drama regarding Johnson. Seemingly out of nowhere this news came and went as his contract with CBS lapsed and there stood too many issues for him to come back to the network…

Johnson is the voice of Madden, a recognized voice in commercials, the marketing staple of Big Ten Network basketball, and the preferred vocie to a rabid and expansive base of vocal supporters who bask in the unique experience he provides when calling a game. Over time the cult of Gus Johnson grew and grew and seemed to dominate mind-share on Twitter, Sportscenter, and the blogosphere. It seemed like he was mainstream but the reality was he was buried at CBS.

Gus Johnson was at best the third string basketball play by play commentator for CBS behind Jim Nantz and Verne Lundquist. On the NFL side of the CBS fence, the depth chart was even worse as Johnson was the 6th string team of announcers, often calling games that were blacked out in local markets and/or way off the national radar.

Johnson made the most out of his assignments and even embraced the fact that his NFL games were far from the limelight. I often found myself fixated on some of his games in the 4th quarter if they were close rather than watching more nationally significant games that were playing out in similar dramatic fashion on DirectTV’s Sunday’s Ticket.

On the basketball side, Johnson did a little more than a handful of regular season games on CBS but spent most of his time with the Big Ten Network. The level of play and competitiveness in the Big Ten seemed to swell during Johnson’s tenure with the network, a tenure that right now maybe potentially winding down.

You could probably find hundreds of mindful leaders who thought Johnson should be bumped up the chain at CBS but it’s never that simple. In many ways it was similar to Conan O’Brien’s dilemma at NBC. 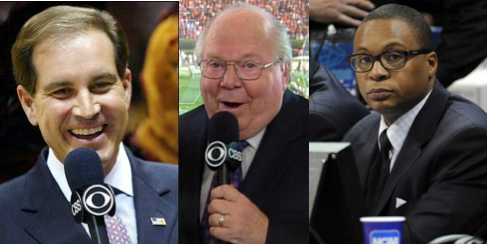 Johnson had the fan support to be the top guy, but CBS wouldn’t part with assets above him in the food chain nor change the face of their network on a guy whose appeal could at times be viewed as niche or gimmicky. Sure he called close games well, but what about bland games? Did he talk over his color commentator? What did traditionalists think of Johnson?

While Jim Nantz certainly doesn’t deserve to be compared to Jay Leno, Nantz couldn’t be displaced. Richard Deitsch painted that picture for us a couple months back by equivocally stating that Nantz was the voice of CBS and quite close with the president of CBS Sports.

Even some of our readers who HEAVILY skew towards Gus Johnson fans would state in our comments that he wasn’t polished nor reliable enough to move up the crowded ladder at CBS.

If Nantz couldn’t be bumped or share the top assignments (announcers/reporters DO NOT historically like sharing) maybe Lundquist or Ian Eagle could. In many ways Lundquist was the guy who you thought might be odd man out at 70 years old.

But CBS again didn’t succumb to temptation. Lundquist not only was the number two NCAA basketball announcer but also the lead voice for their SEC football coverage. SEC fans are notorious for being a bit rabid, temperamental, and at times old fashioned. While Johnson could have likely done well in that role, it would have been a HUGE roll of the dice to move him into a new sport while also displacing a legend.  Lundquist is also a key personality in CBS’s golf coverage and it may have had too much prestige and allies internally at CBS to have Johnson make a dent in his role.

Ian Eagle is another talented broadcaster at CBS who Johnson seemed to be log-jammed with in the pack.  At the end of the day, if Johnson really wanted something meaningful outside of a raise and some added high-profile games, there was just too many accomplished voices at CBS for him to climb over regardless of the supportive chatter from his base.

Enter Fox – a network with putrid broadcast talent and the grandeur of beefing up their sports portfolio with additional properties. To be fair, everyone right now is trying to add programming (NBC/Comcast, Turner, conference/league owned networks, regional affiliates) but Fox had a string of big wins over the last several months. College football was coming back to Fox and college basketball was right behind and Fox needed to bolster their talent as their MLB and NFL broadcasts were regularly getting pummeled by media analysts.

Also, Fox was mocked incessantly for their last foray into college football as their broadcasts of BCS games were unanimously panned by fans and pundits alike. If anyone ever needed a new voice for a sport, it was Fox and college football.

Frankly speaking, everything seemed to line up for Johnson to make the move. The ability to do college basketball, the NFL, and NCAA football and in a prominent position. If Johnson wants to remain affiliated with BTN (schedule permitting), it likely will be a non issue given Fox owns 49% of the network.

The scope of Johnson’s role or even the formal announcement of his addition to Fox/FX has yet to be unveiled. Given the state of affairs in terms of broadcast talent at Fox and the strong interest in Johnson, you’d assume he’ll likely be the network’s second biggest personality behind Joe Buck.

Although Johnson will be removed from March Madness, I think you’ll likely see him doing a lot of double duty given the geographic nature of Fox’s football coverage. Given he’ll likely do a good deal of Pac 12 football games on Saturday, he’ll be in good position to do NFL games the following day. Four of the Pac 12’s schools (Washington, Arizona State, Cal, and Stanford) are all in the same media market as a NFC team that Fox holds broadcast rights to. Johnson can also do some light travel on Saturday Night and be in position for a NFL game the following day for an even broader combination of NFC teams and Pac 12 markets. Both Kirk Herbstreet and and Matt Millen (unfortunately) have shown us that these lead personalities can be given an aggressive schedule of assignments across the country and I think we’ll see some of that with Johnson at Fox.

In the end, you’re going to be getting more Gus Johnson year round. In March you’ll miss him but the flip side is that you may no longer have to hit the mute button when you’re watching Fox football coverage. If you’re a fan of an NFC team or a Pac 12 school, you’re a big winner in all of this. My condolences to fans of AFC teams and most likely the Big Ten, who may soon lose his services as well.

In the end CBS avoided an awkward NBC/Conan type situation and Johnson is moving up in the world. March Madness won’t be the same but it was already beginning to feel a bit weird with Charles Barkley in studio. Still though, we’ll be deprived of moments like this and for that let’s all have a moment of silence.