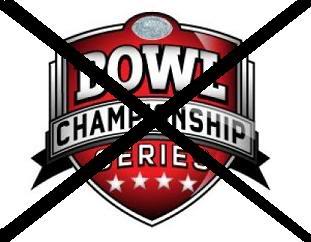 The final BCS standings were released last night and it will be a rematch in the BCS National Championship Game as #1 LSU plays #2 Alabama.  #3 Oklahoma State fell just short in the final tally and now has to settle for a berth in the Fiesta Bowl.  All around the country, college football fans are either happy the system selected two best teams… or infuriated with rage that the sport gave us a national championship rematch.  And really, no matter whether you’re in the pro-rematch or anti-rematch camp, the fact that there even is a debate about who belongs in the title game is the inherent failing of the BCS and the greatest insult to people who give a damn about college football.

I’m going to warn you now, I detest the BCS more than anything else in sports.  Craig James might as well be Gandhi in comparison.  The corruption, the inequality, the greed… everything about this putrid system is the antithesis to what sports should be about.  I’ll gladly listen to Pam Ward and Matt Millen announce every single game for the rest of time if it means we can get a real I-A playoff.  The whole mystique around the BCS and college football is the regular season actually meaning something.  You’ve heard it before from proponents of the current B*S system (henceforth, I refuse to dignify it with a “C” for the word “championship”).  The regular season is the playoff.  EVERY GAME COUNTS!  Hell, that’s even the official Twitter handle of the B*S.  You can tweet them at @EveryGameCounts and ask them why that first Alabama/LSU game doesn’t actually count.

Come to think of it, most every sport known to humankind decides their champion through action that takes place in the theater of competition.  Not by general banter.  Not by computers.  Not by ESPN analysts advocates that want to politick for a certain team or conference.

The fact that there isn’t a playoff in I-A football is simply because of greed, money, and corruption.  You saw it last year when suspended Ohio State players were allowed to play in the Sugar Bowl.  You saw it this year when B*S bowls passed by higher-ranked teams in favor of schools they think will fill their stadiums and allow them to pocket more cash.  That’s why Michigan gets the payday of a B*S bowl instead of Michigan State, who won their B1G division, and hello, BEAT MICHIGAN EARLIER THIS SEASON!  That’s why Notre Dame has a seat at the table and Boise State doesn’t.  That’s why all the non B*S schools are held out of the big games by the collusion of the bowls and the elite schools of the power conferences.

Money is also what ESPN’s seedy role in college football realignment and their B*S advocacy is all about too.  Their influence is a huge factor as well.  The SEC has proven their worth time and again on the field.  They’ve earned every benefit of the doubt, but the influence of ESPN and CBS certainly doesn’t hurt.  How much did it help Alabama that the leader carried the rematch conversation for the last month?  In no other sport do the words of analysts actually influence and mean something tangible.  Would you want to live in a world where Skip Bayless’ unending love of Tim Tebow had an impact on the Broncos being selected to play in the NFL postseason.  Horrifying, isn’t it.

It’s no way to determine a champion, but boy it makes everyone richer from universitiy presidents and athletic departments to television networks and the bowls themselves.  Apparently, not even T. Boone Pickens himself has enough money to sway the level of corruption that runs deep with everyone sitting at the B*S table.

And let’s not go down the road of saying a playoff would ruin college football.  Does a playoff hurt the NFL regular season?  Tell me what would you rather debate – whether or not LSU should play Oklahoma State or Alabama based on statistics and the dreaded “eye test” to determine the “two best teams” or would you rather talk about whether or not Wisconsin could win on the road at Oregon in a first round playoff game?  How about Clemson looking for an upset at Alabama or Boise State getting a shot against LSU?  I’d much rather debate about the games than have the debates decide the game.

But this season more than any other is the greatest failing of the B*S, and we’ve all fallen for it.  We’ve fallen for it because fans and pundits everywhere are entrenched in the Alabama vs Oklahoma State debate and we just can’t resist a good sports debate.  (Why else do you think there are 4,286 PTI spinoffs?)  Don’t you see that’s what the B*S wants???  They want us talking, debating, discussing.  They want the air time.  They want the Twitter convos.  They want the endless hours of television coverage.

But in truth, nobody can say they know Alabama is better than Oklahoma State or vice versa.  It’s all guesswork.  And I’m sorry, but the national championship of college football is too important to be decided by guesswork.  And believe it or not, there were actually people on either side of the day trying to use tragedies like the Tuscaloosa tornado and the Oklahoma State plane crash as arguments for and against their choices.  What kind of madness produces that kind of complete detachment from reality?  It’s just one of the many reasons why this is the worst year yet of the B*S system…

Florida’s statement in 2006 was a 38-28 victory over #8 Arkansas in the SEC title game.  Oklahoma State smashed #10 Oklahoma 44-10 in a de facto Big 12 title game this year.  So riddle me this, why didn’t human voters jump Oklahoma State ahead of Alabama this year in the exact same scenario?  Why was what was right in 2006 wrong in 2011?  It is only preseason expectations and the national reputation of the SEC that has turned the tables this year.  Sunday night, Chris Fowler and others had already cemented the rematch, locking out any discussion of Oklahoma State’s argument, largely because Alabama and LSU were the “two best teams.”

But were they?  Oklahoma State had the 6th toughest schedule according to Sagarin, Alabama 23rd.  Oklahoma State was 4-0 against teams that finished in the B*S Top 25, Alabama 3-1.  Oklahoma State was 8-0 against teams with a winning record, Alabama 3-1.  Mark May can tout the SEC all he wants, but the Big 12 was the better league this year and Alabama didn’t even play the SEC’s best teams in the East, Georgia or South Carolina.  Although, to their credit, they did meet in the middle and play Georgia Southern.  The Alabama argument rests on the “better loss” – Bama to #1 LSU in overtime, Oklahoma State on the road to Iowa State in overtime.  Which is fine.  It’s a totally legit argument.  But then again, we didn’t play by the same rules back in 2006.  That’s the issue at hand.

2011 Oklahoma State and 2006 Michigan can get in line with all the other schools that have been screwed out of a real chance to win a championship.  ELEVEN non-AQ teams have gone undefeated and not gotten a chance to play for a championship simply because of who they are and what conference they play in.  2000 Miami had one loss and had beaten Florida State in the regular season, but it was the Noles that played in the final game eventually losing to Oklahoma.  2003 USC was left out of the final game in favor of an Oklahoma team that lost their Big 12 title game by 28 points, but at least they got an AP trophy.  2004 Auburn went unbeaten but wasn’t as lucky.  Even teams from B*S conferences aren’t immune to being left out in the cold as 2009 Cincinnati learned the hard way.

And that’s what we end up settling for year after year in the crooked B*S system.  A system where you have to be in an elite group of 30 teams out of 120 that even have a chance to be considered for the final game because we’re predisposed into thinking they’re better than everybody else.  That’s not sports, that’s not even American!  Where are you Occupy protesters when we actually need you!!!  If the B*S ruled sports, there would be no Green Bay Packers winning three road playoff games and then the Super Bowl.  There would be no Villanovas or NC States or Butlers.  There would be no USA Olympic hockey team.  There would be none of that because they would be dismissed from the outset as not belonging.

I love sports and this idea sickens me to the core.  It makes me physically ill that we have to sit here and deal with this B*S year after year after year.  I am absolutely numb to any argument Mark May, Lou Holtz, Knute Rockne, Gary Danielson, Craig James, Skip Bayless, Michael Wilbon, Trevor Matich, Archie Griffin, Todd McShay, Andy Staples, Dan Wetzel, Rudy Ruettiger, or anyone else even remotely associated with college football may have about who belongs in the final game this year and the merits of the B*S.

The sad truth is, that’s exactly what the B*S wants.