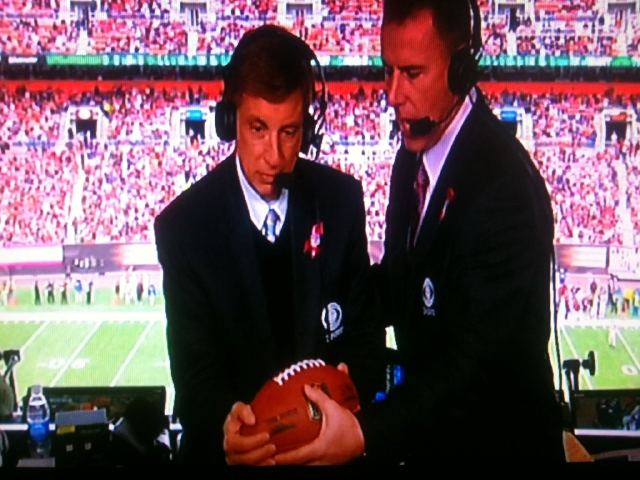 We’re adding a lot of new features this week to complement the Real Tweets from Real People Monday NFL feature to give you a bigger and better Week 4 NFL review.  Marv Albert is clearly mesmerized.  I haven’t seen him make that facial expression since this.  I suppose Rich Gannon awkwardly holding a football in front of you will do that to someone.  So, in addition to tweets and quotes to us, we have video of some of the best and worst calls of the week as well.

But first, tell us who had the biggest fail of Week 4.

A) First, comes Ronnie Brown‘s bizarre attempt at a lateral while being tackled at the goalline.  Nice to see the Aaron Brooks glitch is alive and well…

C) Joe Buck had a little bit of trouble with what down it is at the end of the Cowboys/Lions game.  This wouldn’t be such a big deal, except it was sorta kinda 4th down with the game on the line.

Now, onto Real Tweets from Real People for Week 4 in the NFL…

ProFootballWkly How do you make a battle of winless teams entertaining? Gus Johnson. He is going nuts during this #Vikings – #Chiefs game.
Chris_Spatola I enjoy Gus Johnson more than the sporting event he’s announcing. I’d tune in to hear him announce a paint drying event
ScottyDirt Could you imagine if Gus Johnson was commentating the Lions game today? Would have made it 10000X more exciting than Joe Buck.
MrCarlisle86 It’s sad that only Buffalo Wild Wing commercials realize how much better sports are with Gus Johnson.
Dallask611 Only Gus Johnson can have me so excited about the vikings chiefs game
AaronWendelboe Wish my life was announced by Gus Johnson

DanSnyderCares Finally catching up on today’s highlights. Joe Buck’s corpse wasn’t very excited during the calls of Megatron’s two TDs.
bubbaprog In the annals of unenthusiastic calls, Joe Buck just delivered his greatest. Mostly because he didn’t know it was 4th down.
Bobby_BigWheel On a work call during the game. My boss talking about Powerpoint is a marked improvement over Joe Buck.
TerryFoster971 Oh man. Is Joe Buck really doing the Lions game? I’d rather have Pam Ward
alyerin Actually got to watch an NFL game for the first time in ages. Good to hear Joe Buck is still as exciting to listen to as watching paint dry.
BryantJohnson1 I’m calling Division 2 FB games but Joe Buck & Troy Aikman can’t figure out what down it is in the final play of a NFL game. Unbelievable.

timstwrt “And Mare hammers it right down the throat.” 29 yard FGs take Thom Brennaman to the edge of some pretty dark places.
matterickson23 Thom Brennaman, earlier you said a Bears TD was crucial to make it a 2-possession game. Except it would’ve just been an 8-point lead. #math
gwg Thom Brennaman should never call a Chicago sporting event. His voice makes me flash back to the 2003 NLCS. #notfun
KingDonutI Thom Brennaman: “Jay Cutler is not happy.” Uhhh, dude, that’s all the damn time. #Bears #Panthers #NFL

SC_DougFarrar I made it through the first quarter before hitting mute, which means that at least these announcers are better than Phil Simms.
stuffheknows I almost always start disagreeing with Phil Simms halfway through his sentences @awfulannouncing #NFL
TundraVision Simms: “That Minnesota game is going to be rough.” Seriously, Phil?
Cosmis “I’m gonna ignore the score of the game and talk about Tebow one more time.” Phil Simms just said that on National Television.
WhiteLightnin21 Phil Simms is putting on a clinic in how to not make sense

DaBearNecess Billick dropping a ton of “This Guy” comments on Hester. @awfulannouncing
bteller @awfulannouncing game color guy on Fox just said the rams can’t worry about “the two S’s – stats and statistics” (Tim Ryan)
ChimpanzeeRage “Perfect ball location. Yes, a little high and a little outside, but one he should catch.” T Ryan (not so perfect then?) @awfulannouncing
rfwill13@awfulannouncing Vick took matters into his own hands. No pun intended -Ron Pitts.
greebs Jim Mora has now entered that “even when he’s right I want to disagree with him” zone. @awfulannouncing
bjo109 @awfulannouncing siragusa “the ship is sinking right now” after arizona gets called for block in the back. meanwhile they’re up 13-10…