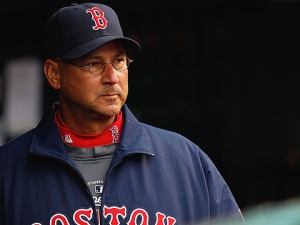 A bit of surprising news out today involves the indomitable MLB on Fox partnership of Joe Buck and Tim McCarver.  It was announced today that former Boston Red Sox manager Terry Francona will replace McCarver for the first two games of the ALCS on Fox.  From CSN New England…

“Francona has been hired by FOX to serve as a color commentator for the network’s coverage of the American League Championship Series. Francona, who parted company with the Red Sox last Friday, will be replacing Tim McCarver, who is sidelined with a medical issue. McCarver is expected back by Game 3 of the ALCS, meaning Francona will likely work only the first two games of the telecasts with play-by-play announcer Joe Buck.”

McCarver will miss Games 1 & 2 due to a minor heart procedure according to Dan Bell of Fox.  We certainly wish Tim the best of health.  Yea, he’s on AA’s Mount Rushmore, but we are compassionate human beings first and foremost.

As for analyzing the hiring of Francona – it’s a risky, but bold move by Fox.  To install Francona as the sole analyst for these games places a lot of pressure on someone that is new to the enviornment and will have to work as a solo analyst.  It’s surprising Fox didn’t replace McCarver with Francona and one of their present analysts like Eric Karros.  However, Francona’s addition has the potential of being a home run.  Fox has found some success in the past bringing in analysts either still in or just out of baseball – Al Leiter’s work in the Cubs/Marlins NLCS stands out off the top of my head.  Other managers like Jeff Van Gundy and Jon Gruden were able to add interesting insights in their early days as broadcasters being just removed from coaching as well.  For the World Series, Fox is also adding White Sox catcher slash pro wrestler slash knucklehead AJ Pierzynski to their studio team.

Whatever you think of McCarver or Francona, you have to give Fox credit for at least trying something new.  We’ve noted Fox’s stale baseball presentation in the past, so the addition of a new voice like Francona is a welcome move.  Sure, he may be Brett Favre in the end, but it’s encouraging to see a network willing to take a high profile gamble in this situation.  If Francona works out, it wouldn’t surprise me to see him stick with Fox throughout the rest of the postseason.