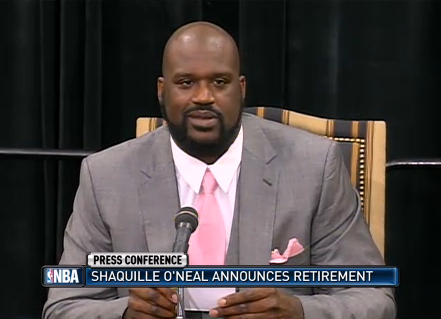 As you may have already heard, Shaq has retired from basketball.  Yes, we can debate Shaq’s legacy on the basketball court for the next several years as an all-time great, but the more immediate question is what lies ahead of Shaq in his post-basketball career.  And, while The Big AARP has worn many hats already in life (actor, genie, sheriff, statue, etc.), a move into the sports media seems like a natural progression for one of the most entertaining athletes of our generation.

Not surprisingly, ESPN has already shown interest  in bringing Shaq into their legion of on-air personalities.  And, with the loss of Kevin McHale to the Houston Rockets as head coach, TNT may very well be a player as well to add Shaq to Inside the NBA.  Charles Barkley basically confirmed as much on the Dan Patrick Show.

“Of course it is. Shaquille O’Neal is a great person, he’s very smart, and I’m joking but I’m serious, somebody is gonna be fired whether it’s at TNT or ESPN. He’s gonna get a TV job if he wants it. Somebody is getting their final walking papers as we speak because he’s going to have his choice of where he wants to go.”

“Yes. He’s got an open invitation. He’s in a unique situation. He can do whatever he wants to do. Remember he’s done all this other TV stuff, he doesn’t have to do basketball commentating. He’s got a lot of things covered and he’s in a totally different situation too.”

Shaq may not be personally responsible for someone’s pink slip, but Barkley certainly has a point. Both of the NBA’s TV partners would be foolish to not push someone else aside to give Shaq a broad presence for NBA coverage and beyond.  So which network would be the better fit?  The combination of Shaq along with Sir Charles, Kenny Smith, and Ernie Johnson would take one of the best sports shows on TV (Inside the NBA) and only make it better.  But would the outsized personalities of Shaq and Barkley on the same set be redundant?  What about opportunities outside of NBA coverage, which would be very limited with Turner?

For several reasons, ESPN is a far better fit for Shaq’s second career in the sports media.  First, Shaq would be an immediate upgrade over ESPN’s current main studio analysts: Jon Barry, Michael Wilbon, and Magic Johnson, the classic example of a legendary athlete becoming a mediocre on-air personality.  For every one insightful comment from Magic, there are dozens of others that elicit a shrug of the shoulders, especially when he waxes poetic about the Lakers.  Trading Magic for the Shaqtus would take ESPN’s NBA studio coverage to another level, or in other words, actually make it entertaining.  As we’ve pointed out previously, the introduction of Shaq would definitely give ESPN’s studio crew a much needed shot of charisma, a department in which they are sorely lacking.

But even more appealing has to be the wide range of opportunities Shaq would have at ESPN outside of being confined to a studio show.  What about a reality show that follows Shaq around on his series of escapades?  ABC’s already had some success with the Shaq VS show…even if he may have “borrowed” the idea from Steve Nash.  How about an even more out-of-the box idea for Shaq: his own national talk show on ESPN Radio?  Let’s face it, ESPN’s Radio hosts are pretty weak.  Mike and Mike serve their purpose in the mornings, but Colin Cowherd is unbearable, Doug Gottleib is not far behind, and I’ve never thought to myself, “Boy, I just have to hear Scott Van Pelt’s opinion”.

Why not give Shaq the afternoon show on ESPN Radio, which has suffered mightily since Dan Patrick’s departure.  Put Shaq with a competent sidekick who can feed Shaq the important topics for debate, discussion and enjoy!  And it’s not like Shaq would just be there for laughs.  In fact, a couple of years ago AA had a great story about Shaq taking part in a broadcasting boot camp, including a radio interview with then draft prospect Stephen Curry that was actually a great listen. Unfortunately, looks like you’ll have to take my word for it since the video has disappeared.

Studio analyst, reality star, radio host, it doesn’t really matter what Shaq has his heart set on because he will be given any opportunity he wishes to begin his media career.  No matter what Shaq decides, ESPN might be the best option.  The family of networks would give him the versatility to spread his wings to pursue whatever new media he wants, which could be a combination of a myriad of roles.  Regardless, we’re all likely to tune in for the fun.