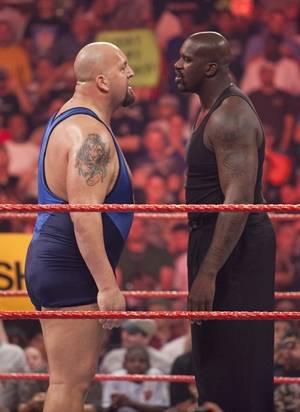 After retiring from the NBA this summer, Shaquille O’Neal joined up with the gang at TNT, adding another former player to the Inside the NBA staff. But now, there’s a rumor circulating that Shaq is looking to wrestle at this coming year’s WrestleMania. His rumored opponent is The Big Show, who WWE bills as “the largest athlete in professional sports.”

Athletes getting into the ring is nothing new. Remember Dennis Rodman’s multiple WCW appearances? Karl Malone being brought in to counter Rodman? NFL legend Kevin Greene facing the very same Big Show, then known as The Giant? And hell, even Shaq himself got into the act a couple of years ago! But Shaq isn’t an athlete anymore, he’s an announcer. Announcers really don’t have that aura about them that athletes do.

I was able to think of one announcer that got involved with wrestling, though in a decidedly non-physical aspect: Milwaukee Brewers play by play man Bob Uecker, who was inducted into the WWE Hall of Fame in 2010. It’ll be interesting to see if TNT even plugs O’Neal’s appearances with the company (if they happen), due to WWE’s relationship with Viacom. TNT used to be the home of WCW Monday Nitro, which was taken off the air more than a decade ago when WWE bought out WCW. Wrestling hasn’t made an appearance on Turner stations since, and I really don’t know what the company would do if O’Neal decided to get involved.

It would be pretty cool to see the Inside the NBA crew interact with some of the WWE elite, though. Again, this is highly implausible, but imagine the Big Show or other WWE wrestlers invading the Inside the NBA set, and dressing Ernie Johnson down on a level that Kenny Smith and Charles Barkley just wish they could. And hell, think about Barkley and Smith showing up on WWE Raw or Smackdown to support their co-worker.

I’d love to see a crossover between the two flagship shows, but I think it’s extremely unlikely to happen. But it would be a nice way to shake things up for fans of both programs. Neither the NBA or WWE really need to leech off of each other, but I’m sure fans of both products would love the crossover.