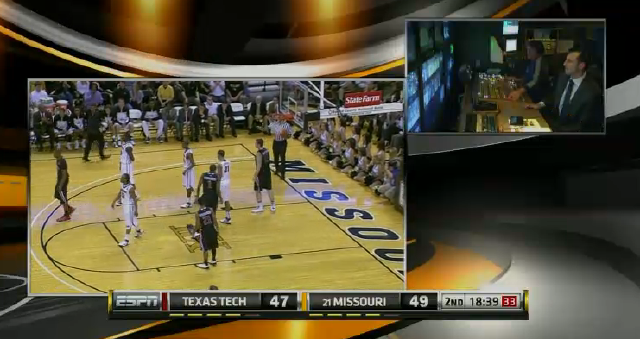 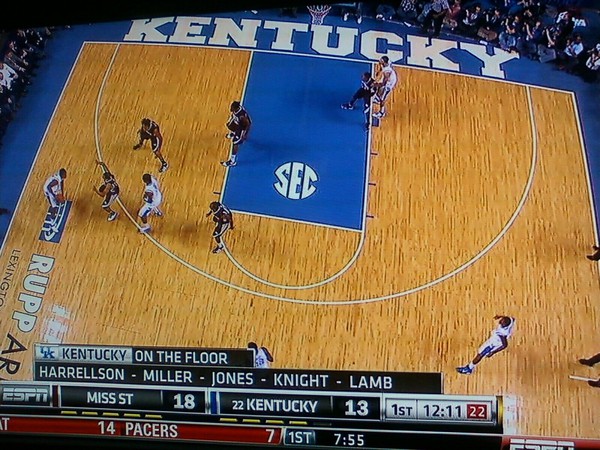 So, ESPN had the fantastic idea of using their SkyCam as the primary camera for the Kentucky vs Mississippi State basketball game tonight (as evidenced by this Twitpic by thomasbeisner).  Basically, the viewer at home is suspended in mid-air above the court.  In football, SkyCam is a great idea for replays, and perhaps the odd live play or extra point.  As the main camera of a basketball game, it’s one of the most horrendous ideas in sports television since The Daily Line on Versus.  Tweeps spoke loud and clear of the wretchedness of this idea.  As always, these are Real Tweets from Real People…

IraSez If you know anyone at ESPN, please tell them the overhead camera they are using for the game currently on sucks!
dhubba Camera angle for UK/MSU game worst decision by @ESPN since “The Decision”
ericpaulwright ESPN’s next camera idea: favorite place in the world. Up Coach K’s a**.
Katstatic The overhead camera at the UK game is going to be the death of me tonight. Where are my motion sickness pills? Thanks ESPN.
MarkCornett33 And ESPN is making watching this game unbearable with this jacked up camera!!!! They said it’s like Duke, this is NOT Duke
Aaron_Torres If ESPN’s goal with this overhead camera is to make me sea sick, they have officially accomplished that goal….
freyj22 @GottliebShow hey ESPN what is this awful camera view I’d spend 5 dollars and sit in the rafters to watch game I’m not breaking down plays
Travis_Waldron I wish I could say whether or not that was a foul, but thanks to ESPN’s glorious use of the worst camera in the world, I couldn’t tell.
CoachRoweOHS Dear ESPN- We are not your guinea pig. Fix the camera.
maxey2005 Just turned on the UK/Miss St. game on ESPN and this is easily the worst camera angle I’ve seen since 7th grade media club w/ handy cams.
buckeye7 not joking guys… You’ve ruined the broadcast of the UK/Miss St game.  The camera angle is making everyone sick.
meisterbuerger @ESPNAndyKatz Who do we talk to to get ESPN to quit wrecking this game with this idiotic camera?
MHudUK I’m gonna puke if ESPN keeps showing this camera angle.
BigBlueMan I’m thinking they should have tried this camera angle on Western Montana & Idaho Southern on ESPNU first.
meisterbuerger On the all-time list of bad broadcasting ideas, this #ESPN overheadcamera is near the top of the list.
KySportsRadio: told ESPN producer that fans hated cameraangle…he said”I know its brutal,but they told us we were going to try it out”
FollowBolson Note to #ESPN, find the off button on the overhead camera at Rupp Arena.  Time to pack it back in truck.  Tried.  Failed.
ClayTravisBGID I wish Renardo Sidney would eat ESPN’s new skycam
bcondotta Dear ESPN: If I wanted that sensation while watching a basketball game I’d go to Charlie Sheen’s house.
That’s not all though!  On ESPN2, analyst Doug Gottlieb was announcing parts of the Mizzou/Texas A&M game from the production truck and dictating replays, with a camera placed on him.  Basically, another great idea that failed epically with the masses.  This picture is from earlyonions on Twitter at the link below.  By now you know the drill, these are more real tweets, from more real people…
earlyonions ESPN’s dedicated Doug Gottleib cam seems to exist solely for the purpose of annoying its audience http://yfrog.com/h7zkmyp
aaronholland Doug Gottlieb directing during Mizz/Tech was pointless and awful.  Please don’t do that again.
dn3524 @mutigersdotcom WHY ARE WE WATCHING DOUG GOTTLIEB WATCH???????????? terrible terrible terrible.
DTPsez I want to see the game not Doug Gottlieb directorial debut. Why is ESPN doing this to us? #ESPN
Brian_Haenchen This crap with Doug Gottlieb is ridiculous.  No one cares or is enjoying this ESPN.
jk411 Hey ESPN, I didn’t buy a big screen TV so half of it could be filled with Doug Gottlieb’s stupid face. You broadcast sports!
AaronDickens This Doug Gottlieb thing is terrible. It adds nothing to the broadcast. Viewers want to see the game, not Gottlieb playing Spielberg.
SeidtOMite As if Doug Gottlieb wasn’t annoying enough, this double box of him makes me want to kick puppies. #Mizzou

“Doug Gottlieb will leave his courtside seat to go into our production truck to take over as director of the telecast for a segment. As part of this, he will direct the game from a fan/analyst’s perspective while still providing analysis of the on-court action. It’s part of a larger week-long initiative to provide fans with a different view of the game. We also placed Jay Bilas and Bill Raftery on opposite ends of the court for a game last night, will mic a referee on tonight’s Michigan-Ohio State game, put an isolated camera on Duke’s Nolan Smith, and more.”

What is ESPN thinking here?  During the Kansas/Kansas State broadcast, the ref mic at the Ohio State game was brought up in conversation and Bobby Knight openly questioned the idea, saying that he thought the referee may not be able to do his job properly.  To add to that, it seems like a rather pointless idea, ala Doug Gottlieb in the production truck, or the nauseating SkyCam.  With no official press release, or any real promotion of a week of broadcast initiatives, I wonder whether ESPN knew that these ideas would be massive flops ahead of time… or whether they wanted to shock viewers with ridiculously bad ideas just because they could get away with it.  Apparently, this week is dedicated to ESPN making the most random, drunken alterations to their broadcasts as humanly possible.  What’s next – a glowball?  Bob Knight in a small hovercraft that roams the arena?  Mic’d up concession stands?  Shrinking Dick Vitale and placing him in Coach K’s suitjacket?

Comment it up on your thoughts on ESPN’s experimentations.  Did any of them work, what did you like or hate?  What could follow up as the most random new innovation to a sports telecast?  Let us know below.

Check out the live NCAA basketball odds and get ready for the tournament with the BetFirms expert bracket tips.