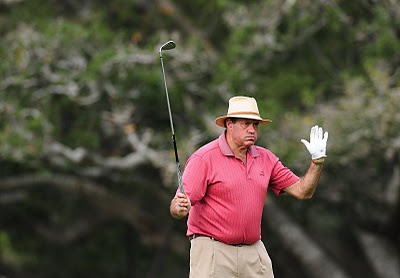 JohnStrege The Human Vuvuzela returns, Chris Berman anchoring ESPN’s U.S. Open coverage. Stay tuned for “David ‘Ground Control to Major’ Toms.” Alas.
GolfweekLavner The US Open marks the unofficial start of the season for a nation of amateurs … but it also means Chris Berman in a TV tower. #mutebutton
JaredHollier Chris Berman calling golf is like Gilbert Gottfried reading scripture. #USOpen
austincollins My god. Chris Berman calling the US Open? It’s hard to relax and enjoy golf with all that heavy breathing going on.
robrosson @awfulannouncing it is the 2 worst days of golf broadcasting every year. Thank goodness ESPN doesn’t take him to the UK
shanebacon Every year I block out the fact that Chris Berman mans the ESPN coverage and every year I’m frantically searching for the mute button early
AC830 Chris Berman anchoring #USOpen is like Larry The Cable Guy hosting the Oscars in a sleeveless tux.
chad_hartley Please get Chris Berman off #USOpen coverage. While we’re at it, get Berman off TV completely. #YoureWithMeLeather.
rick_avidgolfer Chris Berman’s contract clause that he announces U.S. Opens surely must give ESPN execs pause for the cause. Brutal.
starnewsacc @awfulannouncing That’s because Berman is an idiot. Why do you think they keep him as far away from Augusta as possible?
eamonlynch I’ll see Kelly Tilghman and raise you a Chris Berman. There is no bigger jackass — and more ill-informed idiot — in broadcasting.
AlanShipnuck Chris Berman? Curtis Strange? Does ESPN hate us that much?
JimNeveau Memo to @ESPN: having Chris Berman anchor your golf coverage is a surefire way to get me not to watch it.
matt_08 @awfulannouncing is there somewhere I can watch the US open other than espn? Chris Berman is the worst announcer in the history of tv
bkgolfguide It’s not that I won’t watch a golf telecast with Chris Berman announcing, it’s that I can’t. Broken too many TVs that way in the past.
steveflynnlfc Chris Berman as the main anchor for the US Open?? Did ESPN have a meeting and say “Ok..how can we make 5 hours of TV almost unwatchable?”
bigpaulyb Berm must have pics of ESPN exec with barn animals to keep getting that gig.
chrabe I could really use a lot less Chris Berman on this ESPN US Open broadcast. Like, none at all.
SportPundits @awfulannouncing I turned on and immediately Chris Berman used a “patience of Job” pun after Grant Jobe birdied…I switched the channel
JasonKirkSBN Chris Berman is calling the US Open, so I’m going with the Boston police scanner for audio again
michaelwalkerjr After Chris Berman makes a good U.S. Open point, he pauses like George W. Bush after correctly pronouncing a foreign leader’s name.
Rickybouchard @awfulannouncing Chris Berman is famous for being a loudmouth, cheesy nickname giving knucklehead Just perfect for quiet, sophisticated golf
bigByoung Is anyone listening to Chris berman on espn? He keeps going to some slingblade type voice. Frigging hilarious
BigEyedFisch Nothing like the bumblings of Chris Berman to ruin US Open coverage on ESPN.
HoosierdaddyIU @awfulannouncing Love the U.S. Open but is there anything worse than Berman on golf coverage?
EllingYelling I see Chris Berman is back doing Open coverage for ESPN. I hope all the golf doesn’t get in the way of his lame schtick.
BobFriend_Golf Chris Berman should never be allowed to do golf again. He is painful to listen to on this broadcast
grantjess @awfulannouncing ESPN thought it was a good idea for Berman to do lead announcer at the US Open? I thought The Decision approver got fired.