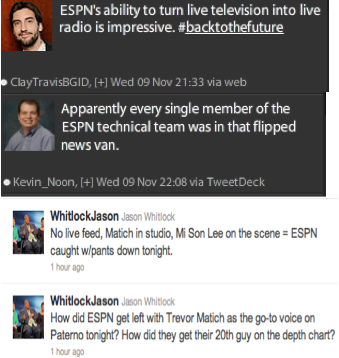 It’s hard to recall a sports scandal so encapturing as what has happened at Penn State with Joe Paterno’s demise, perhaps the OJ Simpson case was the last time a sports scandal reached these heights as a national story.

There are literally dozens of stories that branch off from the sordid details surrounding Jerry Sandusy, Penn State’s reaction, and Joe Paterno’s final days as the head coach of Penn State. One of those stories is a pretty poor job by the media to cover the breaking news when the decision was made to oust Paterno.

We’ll start with the Big Ten Network, who already took flack from multiple media pundits as they seemed to bury the Sandusky/Paterno story for a pretty extensive amount of time.

Their defense made some level of sense (they’re not a 24 hour news organization) but that didn’t really quell the head-scratching. As the story intensified through today, BTN mobilized, but during and after the news of Paterno’s firing the below picture is what you found on Big Ten Network. 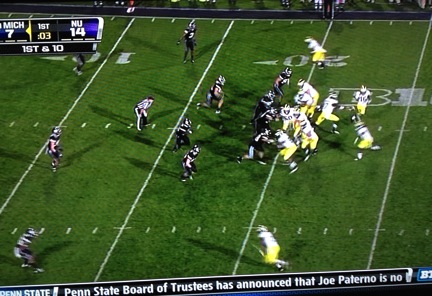 BTN never cut away from various replays of recent games. The scroll stayed in effect and hours later during commercial breaks, someone in studio did pass on the news to viewers. Again though, BTN was never able to rally any type of live coverage.

The news was certainly unexpected as things came together quickly, but this is the biggest story in the conference’s history and let’s be real here…. BTN is no small operation. It seems as if absolutely nobody was on call at their headquarters in Chicago or in State College to cover the ousting of the conference’s most revered figure. I would think that given how this thing was spiralling, there should have been a better contingency plan in place if something were to happen. Obviously there wasn’t.

Matt already shared this clip, but here is a better version from CNN’s coverage where for about 90 minutes we had this completely out of touch anchor fumble covering Paterno’s firing.

I actually flipped to CNN thinking they would be a bit more prepared, but from the 20 seconds I was on the channel and what was said on twitter, CNN really struggled to cover the story adequately.

ESPN had some strong points. Guests were rotated in and out and Steve Levy and hell even Stuart Scott did a pretty solid job. What had most people miffed was that ESPN had absolutely no cameras providing footage of a pending borderline riot that was beginning to take root. In fact, ESPN didn’t even get a camera to the press conference. At that press conference (VIDEO here), there were a bevy of unprofessional questions being asked in an unprofessional manner. That’s not on ESPN, but bears mentioning given we’re bagging on traditional media here.

As pictures, video, and on the ground coverage proliferated Twitter, ESPN seemed to not be able to surround the story. A media truck was flipped, Paterno made an appearance outside of his house, some students were getting confronted by the police, others were peacefully assembling.

Most of this information was fed to the public by feeds of other networks, after the fact, or via twitter. In fact, multiple times ESPN’s coverage would contradict itself as they would report there had been arrests while later on a reporter would claim that there had not been any arrests.

To be fair, this story took off quickly and without much notice. There were multiple places that needed feet on the ground for coverage. ESPN did rally respectable coverage on multiple fronts but that coverage never had live video, was often stale, and was mostly reliant on other outlet’s video feeds. There was very little real time visual storytelling to accompany the commentary, and that persisted for hours.

I do sympathize with the challenge they were faced with. No easy task by any means.

However, given this is ESPN and one of the largest stories in recent memory, the lack of live reports was noticeable considering other media outlets were having success covering the story.  ESPN had Tom Rinaldi at a peaceful rally on the other side of town while they could only muster taped footage from the major hot spots.

Below are some tweets that caught our eye broken down by channel. Overall, the coverage of the unfortunate news was suffice and comprehensive, but severely lacking in some areas. ESPN’s inability to get video of the actual press conference stood out.  At times there were certainly newsworthy events popping up, but they were never broadcasted live on the leader.  Yes, it was tough circumstances, but there were several areas these networks could have done better.  I’m not alone as evidenced below… 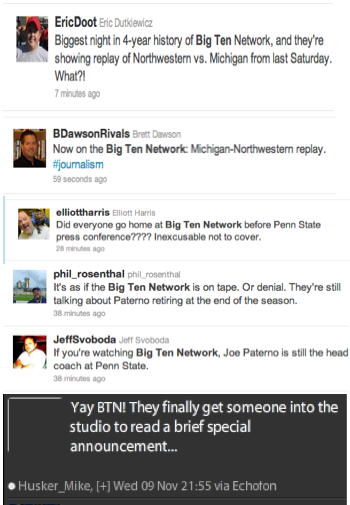 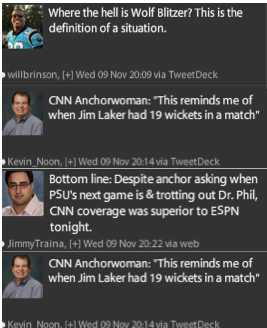 And finally, Richard Sandomir of the New York Times was all over ESPN’s coverage… 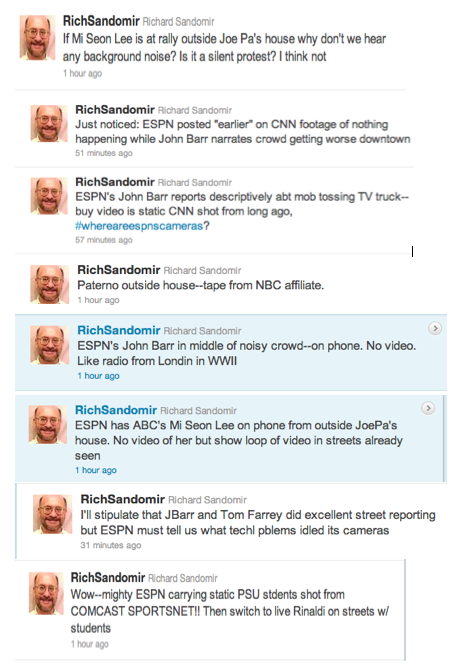