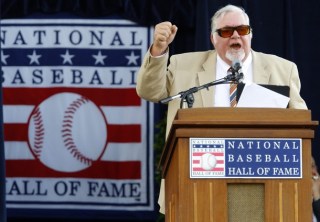 Bill Conlin has been a sportswriter at the Philadelphia Daily News since 1965 and a beat writer for the Philadelphia Phillies since 1966.  Earlier this year, Conlin was awarded the presitious J.G. Taylor Spink Award at the Baseball Hall of Fame, the highest honor given by the Baseball Writers Association of America.  He was also a regular on ESPN’s The Sports Reporters.

Conlin’s 46 year career at the paper ended yesterday as he resigned immediately amidst four people raising allegations that Conlin sexually abused them in the 1970s.  The story was broken first by the Philadelphia Inquirer:

Three women and a man say they were molested as children by Bill Conlin, a Hall of Fame baseball writer and Philadelphia Daily News columnist.

In vivid accounts, the four say Conlin groped and fondled them and touched their genitals in assaults in the 1970s, when they were ages 7 to 12.

“This is a tragedy,” said Kelley Blanchet, a niece of Conlin’s who said he molested her when she was a child. “People have kept his secret. It’s not just the victims, it’s the victims’ families. There were so many people who knew about this and did nothing.”

Conlin retired Tuesday from the Daily News, where he had worked for more than four decades.

Through his lawyer, George Bochetto, Conlin declined to comment.

The Inquirer reports further details from several sources about the alleged molestations and how the victims only began to speak about the events within the past few years.  At the time, no charges were filed and the statute of limitations has long passed.  Perhaps not surprisingly, this story is going public now due somewhat to the scandal at Penn State.  More from the Inquirer:

Blanchet, now a prosecutor in Atlantic City, and the others said they were speaking out now because the alleged sexual assaults and cover-up at Pennsylvania State University brought back painful memories and reminded them of the secrecy that shrouded their own assaults.

They also said they wanted to bring attention to the shortcomings of the statute of limitations on sex crimes, which bars prosecution in their cases because their parents did not call police when the abuse occurred years ago. In several cases, the parents corroborated the accounts, and one – Conlin’s brother-in-law – said the writer broke down in tears and insisted he had only touched the girl’s leg.

It’s another tragic story associated with the sports world.  Who knows the true number of people that have suffered surrounding this developing story, again, because nobody spoke out to defend the allegedly abused children to the proper authorities.  If there is any positive societal change to come out of the terrors that happened at the hands of Jerry Sandusky, it is a raised awareness of the horrible crime of child sex abuse.  Expect to see many more stories like this come out in the coming months as victims continue to speak out.