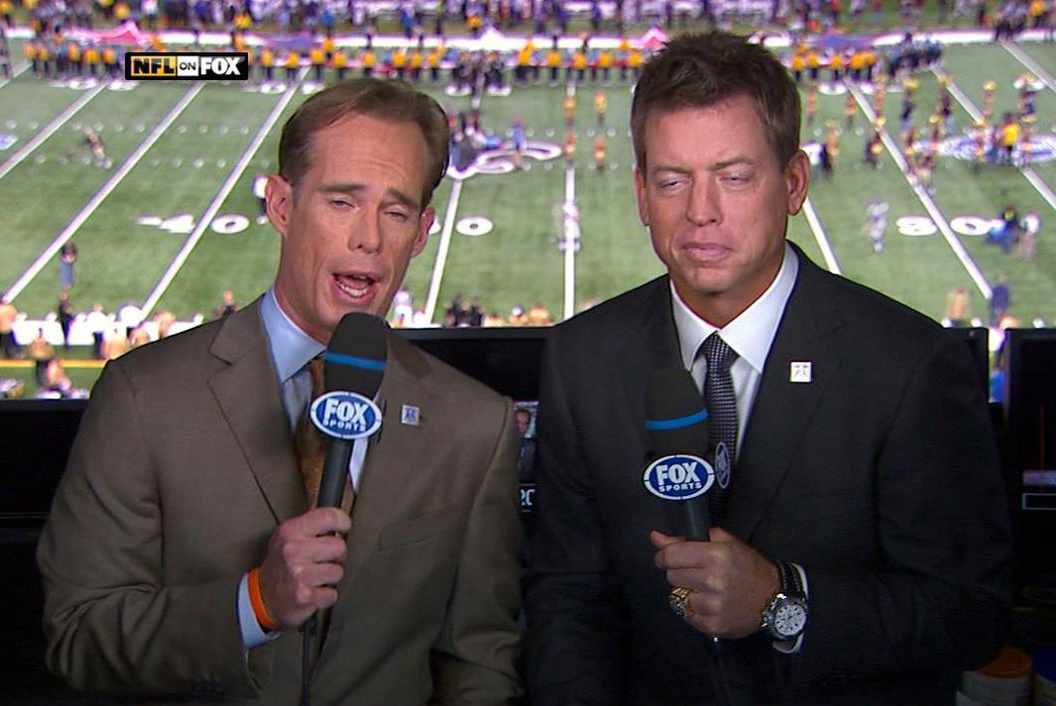 If only to confirm the torture NFL fans are in store for with the upcoming season, FOX released their announcing lineup today for NFL on FOX coverage.  And while the new pairings reflect some changes from last season, the alterations to the lineup look more like rearranging deck chairs on the Titanic than actually beneficial change.  After all, the top three announcing teams all remain untouched from last season while the rest of FOX’s talent pool leaves a lot to be desired.  Let’s run down the announcing tandems and trios one-by-one and let you know our preliminary opinions on the potentially awful announcing we’re in store for this year.

(1) Joe Buck, Troy Aikman, and Pam Oliver
-So, what else is new?  The only difference between Joe Buck’s baseball broadcasting and his football broadcasting is that he’ll be a trending topic on Twitter on Sunday instead of Saturday.  Let’s at least hope Buck’s mysterious voice ailment finally heals before the NFL starts, because the tempo and excitement of football will exacerbate the problem much more than baseball.  As far as Aikman and Oliver…meh.  Aikman can be insightful at times, while other times boring, especially when being dragged down by inane chatter with Buck.  Oliver is the best sideline reporter FOX has to offer, which is by no means an accomplishment for Oliver.

(2) Kenny Albert, Daryl Johnston, and Tony Siragusa
–Much like the #1 announcing team is all about displeasure with Joe Buck continuing as FOX’s #1 in everything, the groaning of fans getting the B team of Albert, Johnston, and Siragusa will be largely directed at the Goose.  As readers of AA will know, we’re not big fans of Siragusa’s on-field reporting/analysis/gasbaggery.  Perhaps no announcer says less while speaking more than Siragusa, who’s main goal seems to be to ruin the viewing experience for fans of both teams subjected to his “analysis”.  And while there’s nothing terribly wrong with the team of Albert and Johnston, they’d be no better than 4th or 5th on the depth chart at CBS, yet they’re #2 at FOX with the albatross of Siragusa hanging around their neck.

(3) Thom Brennaman, Brian Billick, and Laura Okmin
-Another top 3 team, another mixed bag.  In a very short time, Billick has proven to be one of the best game analysts in the NFL.  Much like Jon Gruden, the qualities that made him an abrasive genius as a head coach have translated well to the broadcast booth with Billick’s ability to read the game and relate what he’s seeing to viewers at home.  In fact, it’s a surprise Billick hasn’t been moved up already to join Buck and Aikman on the A team.  Unforunately, Billick is hampered by working with Mr. Monotone, Thom Brennaman.  Perhaps Brennaman wouldn’t be so terrible if he didn’t stick to canned storylines while sounding like someone quite familiar to AA’s Twitter followers.

(4) Dick Stockton and John Lynch
-Wow, this really is a theme with FOX isn’t it?  Once again, they have a half-way decent analyst in John Lynch, who like Billick, has worked hard at becoming a competent announcer.  But, what’s Lynch’s reward for being promoted up the NFL on FOX food chain… Dick Stockton.  Something tells me Lynch will take a step back this year, what with having to remind poor old Dick what city he’s in and what sport he’s announcing!

(5) Chris Myers and Tim Ryan
-I’m going to make this short and sweet.  This may be the worst NFL announcing crew ever assembled.  Tim Ryan is the epitome of an ex-jock meathead while Myers has no business near football play-by-play, let alone on a full-time basis.  Remember this gem from last year? Yikes!  If these two appear on a Bears game this year, the mute button will be in full effect!

(6) Ron Pitts and Jim Mora Jr.
-Give Ron Pitts credit, he’s been determined to make the transition from sideline reporter to play-by-play man work.  And while Pitts is slotted correctly near the bottom of the NFL On Fox depth chart, he does bring effort and commitment every week.  If only his partner Jim Mora could bring the same fire he brought to Doug Gottlieb on a consistent basis, maybe this tandem could have some potential.

(7) Sam Rosen and Chad Pennington
-If the ordering of announcing tandems is reflective of the FOX pecking order, you have to feel for Sam Rosen.  The competent veteran, although nowhere near as adept at football as he is at hockey with the Rangers, gets knocked down several spots compared to previous years.  However, he trades lummox Tim Ryan for the injured Chad Pennington, who definitely has potential as the latest QB turned game analyst.  Even though this pairing is listed 7th here, they could easily grow to be one of the best FOX has to offer by the end of the season if Pennington has something interesting to add as a recent NFL quarterback.

(8) Gus Johnson, Charles Davis, and Tim Brewster
-And last, but not least, we have AA’s darling, Gus Johnson.  Sadly, for those hoping Gus would find himself with higher-profile NFL games on FOX than CBS, you may be disappointed.  With Johnson’s college schedule, he’ll only be a part-time NFL announcer, starting in Week 4 with the Rams/Redskins battle for the ages.  If that type of game is a sign of things to come for Gus and his fans, then don’t get your hopes up for any high-profile gigs for Gus this season.  At least the additional experience with Charles Davis doing college football should help their chemistry once NFL season starts.

My main concern though with this announcing team is Tim Brewster!  When was this guy part of the Gus equation?!?  Really?  Tim Brewster? The same Tim Brewster who was 15-30 at Minnesota and never won a bowl game?  Whose NFL experience entails reaching the heights of Tight Ends coach and who never played in the league?  Wow… was Matt Millen not available?   What credentials does Tim Brewster have to be an NFL announcer?  Call me skeptical at best that Tim Brewster will add anything to FOX’s NFL coverage.  More than likely, Brewster could really hamper the potential of the Davis/Gus pairing if he still has the same delusions of grandeur he did while coach at Minnesota.

Update: After some more digging, and with some help from T.J. Rives on Twitter, it appears Brewster will be in a Tony Siragusa-like role as a field level analyst.  It looks like he’ll be considered more as a 3rd man in the booth (like Siragusa) than a sideline reporter.

What do you think of FOX’s NFL announcing teams?  Are they really as bad as they look on paper?  Do they compare at all with the depth of talent CBS has with their NFL announcers?  Let us know by leaving a comment below!  Maybe an NFL version of the Pammies could be worthwhile if FOX’s announcing “talent” is any indication on how this season of NFL announcing will unfold…